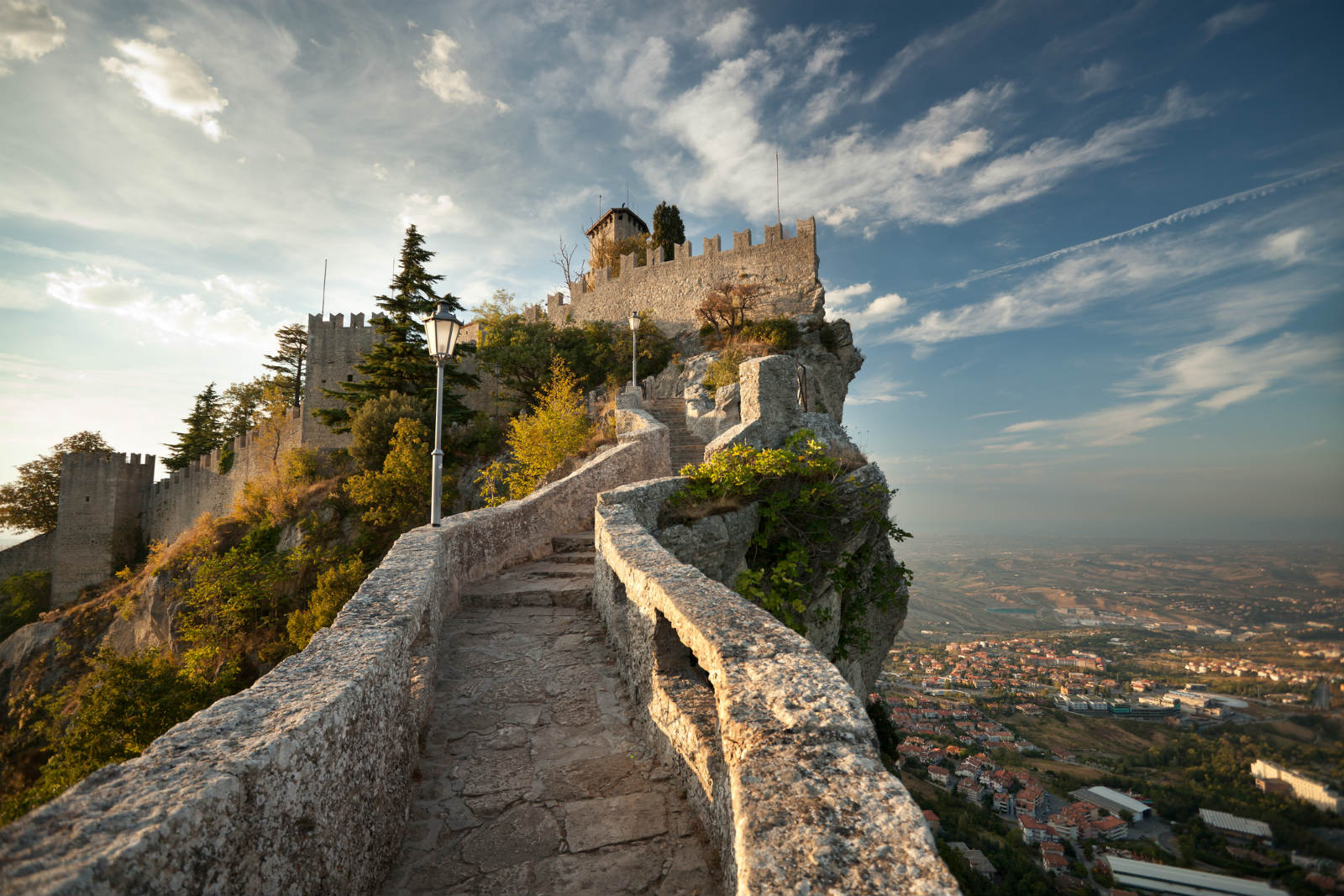 San Marino is the world’s third smallest republic. However, it also stakes claim to being the oldest operating republic on the planet. This tiny republic resides snugly along the Italian east coast, surrounded by the Emilia-Romagna province of Italy. Despite being so close to Italy, and adopting many significant cultural traits from this large neighbor, San Marino is still a relatively unique bastion―just ask the locals. The nation-state is centered upon Mount Titano, which is a World Heritage listed mountain that boasts the famed San Marino Old Town and Three Towers of San Marino. Like loyal subjects bowing to their king, several townships are located at the foot of the mountain, offering another dimension to this tiny state’s intriguing landscape.

As previously mentioned, the heart of the tourism industry in San Marino is the spectacular Mount Titano. Here, three medieval towers are perched overlooking the countryside, like stone gargoyles resting upon the heights of a grand cathedral. Behind the towers lays the historic San Marino City. Tourists can venture here by cable car, then spend hours walking the narrow streets. Plenty of shops provide gift ideas, including gold coin collections, stamps, and ceramic plate collections. Places like the Basilica of San Marino, Government Palace, and the State Museum add an extra element to the old town’s charm. Tourists can also spend time exploring the towns around the foot of Mount Titano, including Borgo Maggiore and its magnificent market place.

There are a number of hotels found in the towns of San Marino, including the historic old town, Borgo Maggiore, and Domagnano. However, with Rimini located less than 15 miles to the east, many tourists choose to visit San Marino for a daytrip, rather than stay overnight. Nevertheless, there are still plenty of hotels to choose from if tourists wish to spend a few nights here. Like the language and religious practices, San Marino’s cuisine is highly influenced by Italy. The main dishes found throughout the state originated in Italy, such as Bolognese, tortellini, and passatelli pasta. The restaurants across San Marino serve dishes using fresh ingredients, and the wines produced in the nation are top quality. Tourists will not find too many places to go after dark. There are several spots to find a drink in the evening, but most locals and tourists tend to visit the cinema or enjoy a meal instead.

The closest airport to San Marino (which doesn’t have its own airport) is found at Rimini, just a few miles away from the eastern border of the republic. Flying to Rimini Airport is certainly the quickest way to reach San Marino, although there is a railway station located in Rimini too. From this Italian coastal resort town, San Marino can be accessed via bus and taxi transfer. Journeys are generally hassle-free. Italian taxis are permitted into San Marino, so there will be no need to change transportation services at the border.

San Marino experiences similar climatic conditions to its surrounding Italian landscapes. It isn’t located in the cold of the European Alps, but still boasts an upland topography, meaning summers are cooler than in the Mediterranean coastline regions. Summer, which falls between the months of June and August, is relatively mild, with occasional showers and temperatures between 75°F and 85°F. The months of December, January, and February are typically the coldest months of the year. These winter months can experience temperatures of below 32°F and snowfall is common, but light compared to the nearby alpine areas of Italy.

When tourists have entered the historic city of San Marino, the only option is to walk around and enjoy the medieval splendor and majestic views. However, getting to the city center can be done by several ways. The San Marino Superhighway travels through the various towns at the foot of Mount Titano before journeying upwards. However, the more memorable way is by taking the cable car from Borgo Maggiore up to the soaring peak of the mountain.

Click here for Things To Do in San Marino