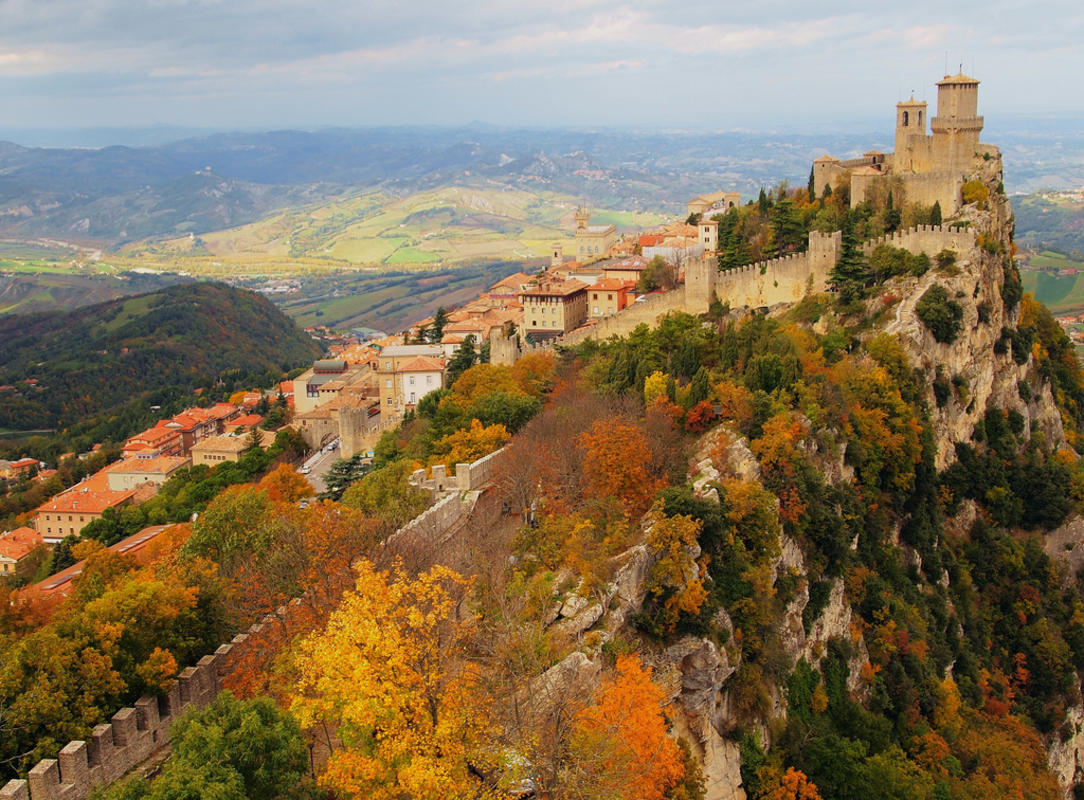 San Marino is one of the smallest countries in the world. However, this doesn’t mean that San Marino is not a memorable destination. In fact, there are some tremendously stunning sites found within the country. Visitors generally start touring San Marino from the top down, which means Mount Titano is usually the first place tourists explore. However, there are plenty of other medieval sites and landmarks to witness, including the Basilica di San Marino and the beautiful Government Palace.

The Roman Catholic Basilica of San Marino is one of the most important tourist attractions in the republic. It was built in 1836 to replace the original one that was built on the same spot in the 7th century. The basilica has been built in a neoclassical architectural style, with a set of Corinthian columns upon the porch. Inside the church, visitors can explore some of the remains of St Marino. Behind the basilica lies the Church of St Peter. Address: Piazza Domus Plebis, San Marino Phone: n/a Website: n/a

The Government Palace of San Marino, which is locally known as Palazzo Pubblico, is the head of the local government. It was built between the years of 1884 and 1894, in a neo-Gothic architectural style, overlooking the beautiful countryside and the Piazza del Liberta. Every day at 8:30 a.m. and 6:30 p.m. the changing of the guards takes place, which shouldn’t be missed by tourists. The Government Palace is located close to many other attractions in San Marino city, so tourists can visit the palace and other sites in the space of a day. Address: Piazza del Liberta, San Marino City, San Marino Phone: +378-549-885-370 Website: n/a

The State Museum, locally known as Muse di Stato, is an important part of the country’s tourism industry. This museum was built in the 19th century, and inaugurated in 1899. However, it went through a significant make-over in the 1990s, and reopened in 2001. The collections inside the museum include archeological finds from the San Marino Middle Ages period, various paintings, ancient coins, donated archeological finds from Egypt, and different art pieces from around Italy. Address: Palazzo Pergamo Belluzi, San Marino Phone: +378-549-883-835 Website: http://www.museidistato.sm/Museo_trad/mds/index.ht...

The Medieval Old Town is the well-preserved ancient center of San Marino. Its narrow streets provide a walk down memory lane. The old town can only be walked, as cars are now banned from the heart of town. Tourists can explore the many shops and buildings without worrying about vehicles. The old town is extremely photogenic, so tourists should definitely head here for a few hours. Getting to the walled old town is achievable via the aerial cable car. Address: San Marino City, San Marino Phone: n/a Website: n/a

Located upon the peaks of Mount Titano, the three towers of San Marino are some of the most spectacular tourist attractions in Europe. The views from the towers are simply breathtaking. The oldest tower is known as Guaita Tower, built in the 11th century. The second tower that is open to the public is the Cesta. It is found on the highest peak of Mount Titano. The last tower is De La Fretta, although tourists cannot enter this one. Nevertheless, great views can be found. Address: Mount Titano, San Marino City, San Marino. Phone: n/a Website: n/a

Built in the 14th century, the St Francis Museum is an interesting attraction for art-lovers and culture vultures. It is part of the Franciscan Monastery, and houses some of the most fascinating artistic pieces in the country. Paintings are the most popular feature of this venue. However, there are also sculptures and professional photography pieces found inside the museum. Emilio Ambron’s most famous pieces are located in two annexed halls. They were given to the museum by the Emilio himself. Address: St Francis Museum, San Marino Old Town, San Marino Phone: n/a Website: http://www.museidistato.sm/Museo_trad/msf/index.ht...

In the city of San Marino, the Museum of Emigration has become one of the top tourist attractions for the republic. Throughout the 19th and 20th centuries, San Marino witnessed large migration out of and into the country. This has been recorded and displayed within the Museum of Emigration. The site gives an interesting account of the country’s population movements. Address: Contrada Omerelli 24, San Marino Phone: +378-549-885-171 Website: http://www.museoemigrante.sm/on-line/home.html

Click here for Food and Restaurants in San Marino