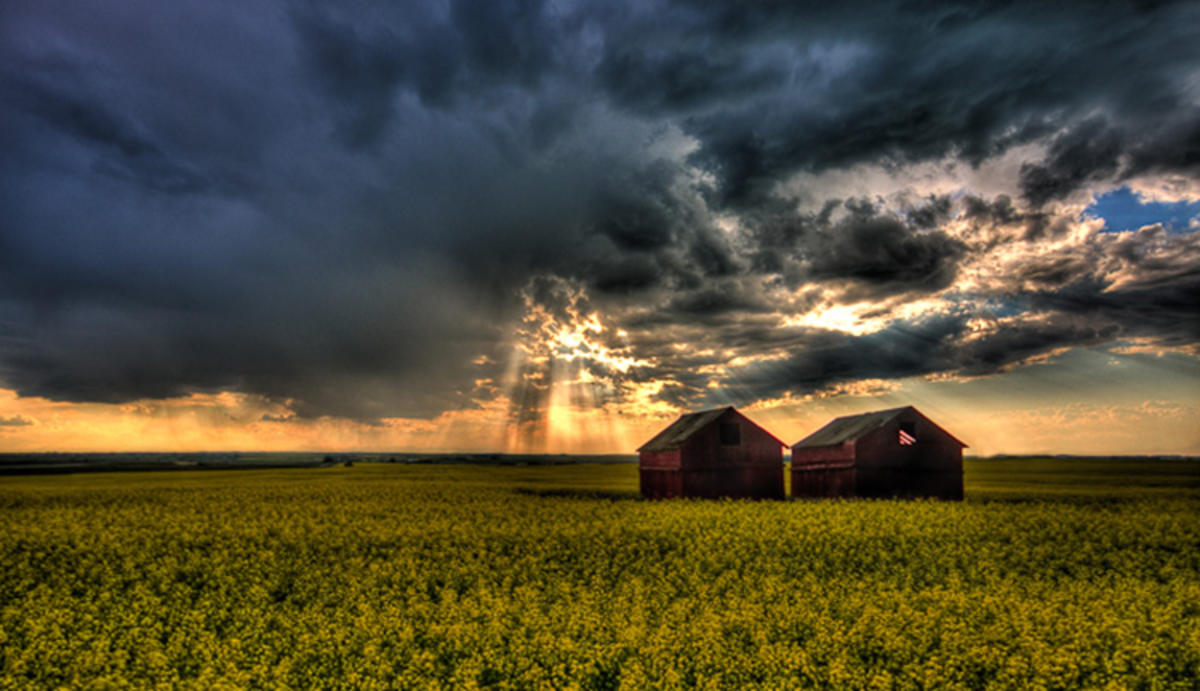 Not only does Alberta’s weather vary dramatically from north to south in this 750-mile long province, but climate conditions can change drastically during the day within the same location. This is especially true at high mountain altitudes and in the foothills south of Calgary, which are especially prone to Chinook winds, often strong enough to blow SUVs, trucks, and other large vehicles off highways.

Alberta’s far distance from the nearest ocean means its humidity is far lower than that of eastern Canada. The Rocky Mountain foothills receive up to twice as much rainfall per year as the rest of this sunny province, whose northern areas enjoy as much as 18 hours of constant sunshine during the summer months.

Dry and warm Chinook winds which blow down from the Rocky Mountains provide frequent respites from southern Alberta’s cold winters. During a single hour, Pincher Creek’s temperature once skyrocketed from nearly -19°C to more than 3.3 °C after a Chinook. Chinooks strike Lethbridge, one of Alberta’s southernmost cities, between 30 to 35 days each year.

Southern and central Alberta are also prone to severe summer thunderstorms, while forested northern Alberta experiences a more sub-arctic climate. More tornadoes strike central Alberta than any other Canadian region outside of southern Ontario and hail falls more often along the 170-mile long Highway 2 stretch between Calgary and Edmonton (containing 75 percent of Alberta’s population) than anywhere else in Canada.

The best season to visit Alberta is summer, when low humidity accompanies warm weather and sunny days. Unfortunately, Alberta’s cities and mountain parks also experience their largest crowds in summer. Up to a million people descend upon Calgary each July during the 10-day Calgary Stampede. Winter may be Alberta’s coldest season, but low humidity helps make the cold temperatures more bearable for those who bundle up. Even in the middle of ski season, Alberta’s resorts are rarely overcrowded and generally cheaper than many United States skiing destinations.

Autumn and spring, Alberta’s shoulder seasons, are generally pleasant, but sudden snowstorms are not unusual, even in late May. Chinook winds, however, often bring temperatures back up to normal spring averages. The color changes of Alberta’s autumn aspens and poplars may not be as spectacular as those of eastern Canadian trees, but autumn is nonetheless a crisp and lovely Alberta season.

Click here to learn about Alberta's Festivals and Events