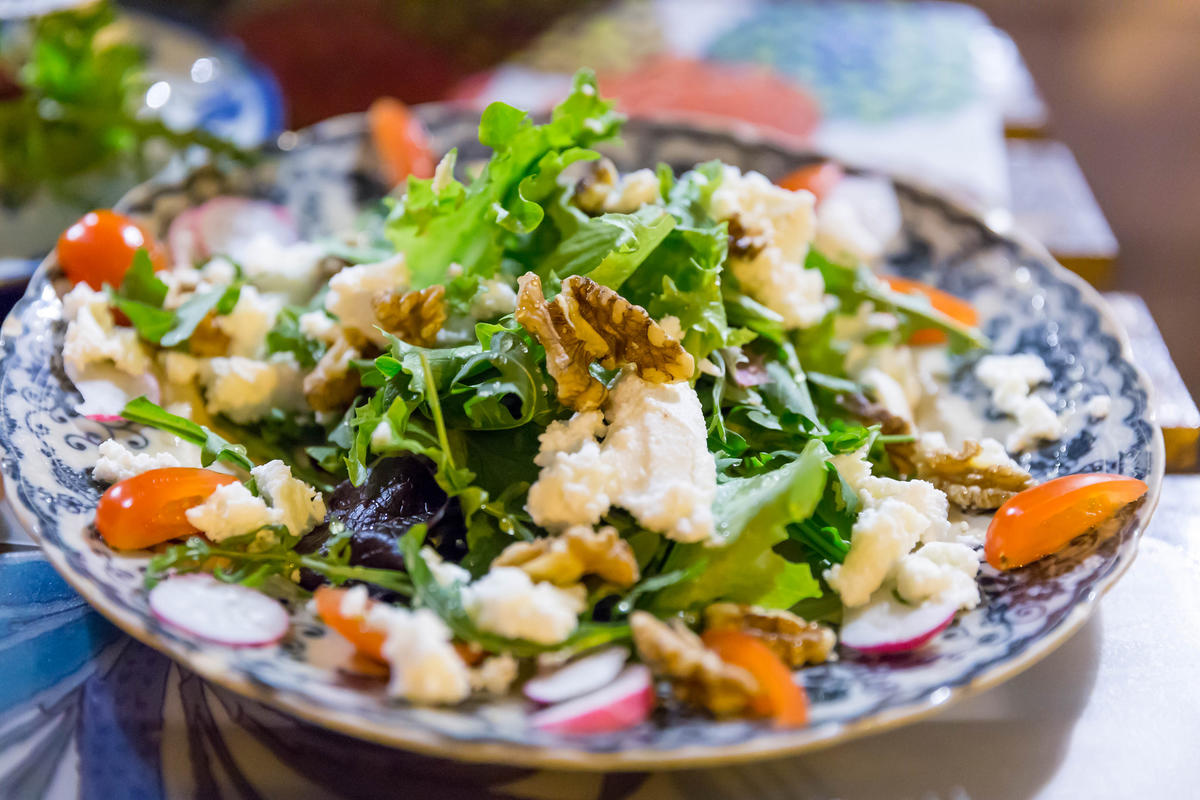 Eating is among the favorite pastimes of the Portuguese. The nation’s signature dish, dried cod called bacalhau, can be cooked a different way for every day of the year. Most traditional Portuguese meals start with olives, freshly baked bread, and a green soup called caldo verde and include grilled meats. Forks are often necessary for fish soup, while rice is the most commonly served side dish. Main courses include roast baby goat, a shrimp stew called açorda de mariscos or fried pork with clam sauce. The national dessert is a delicious and much coveted custard tart called pastel de nata. Several of the spices used in today’s cooking were originally imported during the country's explorations of Asian, and many salads are sprinkled with salt. Among Portugal’s tastier treats are roasted chestnuts sold from street stalls in the fall. Although the cuisine is not especially vegetarian-friendly, many meat-free options are available at popular choose-five-items salad bars and growing numbers of international restaurants.

Bars and Pubbing in Portugal

Portugal’s nightlife begins and ends notoriously late. Many clubs don't open until 1 or 2 a.m., and close well after sunrise. Lisbon’s bars close comparatively early at 2:00 a.m. during the week and 3:00 a.m. on weekends.

One of Lisbon’s trendiest clubs is Silk (Rua da Misericórdia 14, Lisbon), a black and fuschia building whose sixth floor boasts a candlelit outdoor deck with 270 degree views and whose plush couches have probably seen more action than anywhere else in the capital. Another hotspot is CINCO Lounge (Rua Ruben A. Leitão 17A, Lisbon), whose cocktail menu contains no fewer than 100 drink choices. No visit to Lisbon would be complete without a relaxing night at one of the city’s famous fado clubs, one of the oldest of which is Adega Machado (Rua do Norte 91, Lisbon), which has hosted Portugal’s most famous performers since 1937.

One of Porto’s best watering holes is Solar Vinho do Porto (Rua de Entre-Quintas 220, Porto), a serene villa where visitors can relax with a glass of the region's finest port wine and cheese. Livelier nightlife can be found in the Ribeira district, where Prioridade (Rua da Lada 76/78, 4050) serves up some of the city’s cheapest beer. The area is also a popular place to pregame and start the night before heading to Porto’s trendier dance clubs like POP (Rua Padre Luis Cabral 1090, Porto) or Twins (Rua do Passeio Alegre 1000, Porto).

Dining and Cuisine in Portugal

Albufeira is home to many of the Portugal’s finest dining spots, including Alfredo (Rua do 5 de Outubro 9-11, Albufeira), located on the second floor of a 100-year-old building steps from the bustling market square. O Cabaz da Praia (Praça Miguel Bombarda 7, Albufeira), whose name means "the beach basket," serves tasty seafood inside a former seaside fishermen’s cottage.