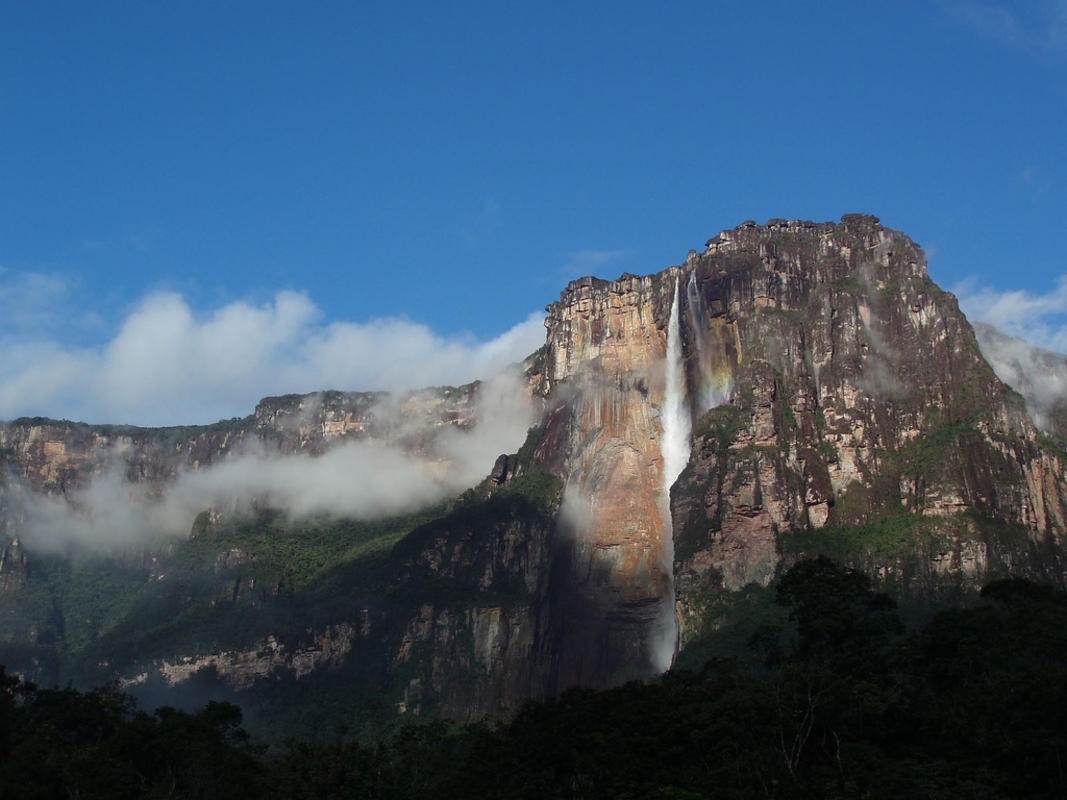 Venezuela is a country full of magnificent landscapes. One of the most famous attractions is Angel Falls, the tallest waterfall in the world. Part of the experience of these cascades is the remote surrounding nature, located in a stunning national park which is the sixth largest in the world. Not forgetting that Venezuela has the longest coastline on the Caribbean Sea of any country, a trip to the idyllic sandy beaches of the outlying islands provides a tranquil experience. Venezuela is also home to the unique bio-region of Los Llanos, rich in wildlife and nature, or visitors can experience a taste of Andean life in the historic city of Merida.

Angel Falls in Venezuela is officially the highest uninterrupted waterfall in the world at 3,212 ft. Also called the “Salto Angel,” the water spills over the edge of the Auyantepui Mountain in the Canaima National Park, which is quite a spectacle. A popular way to get to the falls is by helicopter or river trip June through December, when there is enough rain to fill the waterways. Viewing the falls is considered better at this time too, as the volume of flow is higher. The surrounding park is home to rock plateaus called tepuis, which provide wonderful scenery and a great deal of biodiversity. It was declared a UNESCO World Heritage site in 1994, and is the sixth largest park in the world, about the same size as the entire state of Maryland. Address: Salto Angel, Canaima National Park, eastern Venezuela Phone: n/a Website: http://www.salto-angel.com/

The largest marine park in the Caribbean Sea was created in 1972 to protect the endemic coral reefs, mangroves and seagrass beds. Located 80 miles north of Caracas, you can get here via a 40-minute flight from the port town of La Guaira or charter a yacht to explore the 350 islands, cays and islets of the archipelago. Known for white beaches and clear blue sea, the islands see up to 70,000 visitors a year for their aquatic life and seabirds. Scuba diving, windsurfing, fishing, and sailing are also popular. Address: Los Roques Archipelago Marine Park, northern Venezuela Phone: n/a Website: http://www.losroques.org/

Margarita Island is the largest of three Caribbean islands located off the coast of northeast Venezuela. It is a very popular travel destination due to its great weather and immaculate sandy beaches and is said to have over 330 days of sunshine a year. The most popular beaches are Playa el Agua and Playa Parguito with favorite activities being scuba diving and sunbathing. There is also good nightlife here, making it a great place to unwind. It is possible to fly to the islands from the mainland, or take the nine-hour ferry service. Address: Isla Margarita, Nueva Esparta, northeast Venezuela Phone: n/a Website: http://www.islamargarita.com/

The Merida region is the start of the great Andes mountain chain, the longest continental range on the planet. Stretching continuously down the western spine of South America, the peaks have been inhabited for millennia and you can see a formidable settlement officially called Santiago de los Caballeros de Mérida, which sits on a tableland in the valley of the Chama River at 5,250 ft. With a backdrop of Pico Bolivar, Venezuela’s highest peak reaches 16,338 ft. Climbing excursions are popular, or ride on the city’s cable car, the longest and tallest in the world. Address: Merida, Merida region, western Venezuela Phone: n/a Website: http://www.venezuelatuya.com/andes

Los Llanos are the great plains area, abundant with wildlife and a unique ecosystem. The Orinoco, the longest river in Venezuela virtually splices the country in two. The river and its tributaries are used by locals for transportation via boat, and this can be a nice way to gain an insight into the plains. During the rainy season, many areas will flood, but you may be able to see some wading birds and ducks. The dry season is best for spotting capybaras, jaguars, deer, and foxes. In the waters you will see crocodiles feeding and a type of porpoise wading. Address: Los Llanos, southeastern Venezuela Phone: n/a Website: http://www.venezuelatuya.com/llanos/

Lake Maracaibo is the largest lake in South America and the second oldest body of water on the planet. Geologists have estimated that this ancient lake is nearly 35 million years old. It is connected to the Caribbean Sea via the Gulf of Venezuela on a 34-mile channel in the north called the Tablazo Straight. Its main freshwater feed is the Catumbo River from the southwest. The width of the straight was spanned in 1962 by an eight-mile bridge connecting the towns of Maracaibo and Cabimas, making it one of the longest in the world. There are also several birding locations, where you can see flamingos. You can also witness the “Catumbo Lightning,” a natural phenomenon occurring where the river empties into the lake that produces lightening flashes up to 160 days a year. Address: Lake Maracaibo, northwest Venezuela Phone: n/a Website: n/a