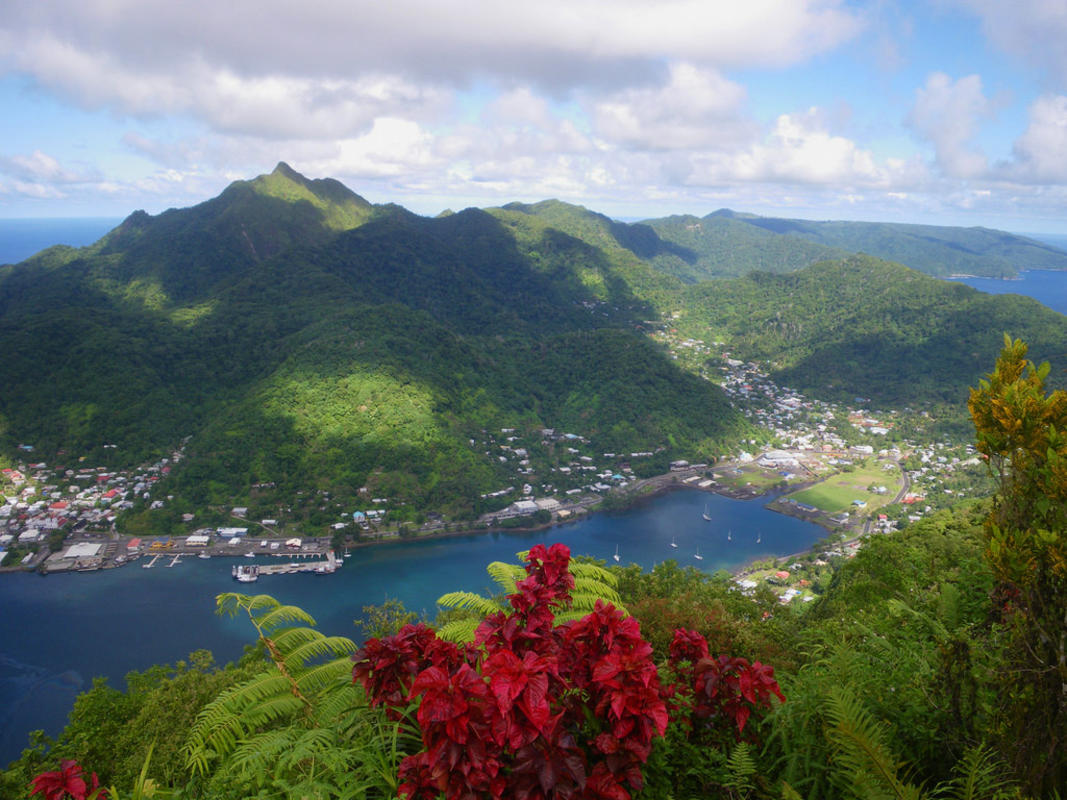 On the surface, American influence appears very strong in American Samoa, especially considering Pago Pago’s giant police cruisers and modern shopping malls. However, American Samoa’s people have managed to balance their status as American nationals with their own proud culture known as fa’a Samoa, a hereditary chieftain system practiced for over 3,000 years.

It is believed American Samoa’s first residents migrated to the islands from Fiji, Tonga, Vanuatu, and Indonesia some time around 600 BC. The first settlement was the eastern Tutuila village of Tula. American Samoa’s strong faamatai chief system is said to originate from two early female chiefs, Nafanua and Salamasina.

The Samoan islands had regular contact with Tonga and Fiji for centuries before Jacob Roggeveen, a Dutch explorer, became the first European to encounter the islands in 1722. They developed a reputation as fierce fighters during their 18th century battles with European explorers, with missionary John Williams successfully bringing Christianity to American Samoa in the 1830’s. The ancient stone pigeon-catching structure of Tia Seu Lupe Park (Ottoville) is among the few surviving landmarks of a culture chiefs had to abandon after converting to Christianity.

After the Second Samoan Civil War, the 1899 Treaty of Berlin formally divided the Samoan archipelago into what would eventually become the independent nation of Samoa and the territory of American Samoa. Several Tutuila chiefs ceded their territories to the United States in the 1900 Treaty of Cession of Tutuila.

Although there was an American Samoa Mau movement for independence during the 1920’s, it was less volatile than the original Mau movement in the future nation of Samoa, which then governed by New Zealand and quickly suppressed. Exiled leader Samuelu Ripley was eventually elected mayor of Richmond, California.

American Samoa came into its own in WWII, when Marines trained teenage boys as young as 14 to fight against the Japanese. Much of American Samoa’s modern transportation infrastructure and medical facilities were established during this time. American Samoa was also an important splashdown site for many of the Apollo Moon Missions. A tiny flag presented to former president Richard Nixon and three moon rocks are displayed in the Jean P Haydon Museum (Fagatogo).

Today, American Samoa’s two main employers are the government and two tuna canneries. Although citizens are American nationals who enjoy most of the same rights as mainland Americans, their ancient Samoan culture remains very much intact and sometimes overrides the constitution, especially on matters of religious displays and property ownership.

Americans may have brought Christianity and modern conveniences to American Samoa, but its people have still successfully preserved Polynesia’s oldest culture. The same is true for the Samoan language, still spoken in most households even though English is taught at school. Less than 1,000 American Samoans over the age of five cannot speak English. Visitors can best the 3,000-year old culture during sacred kava drinking ceremonies, lively fia fia feasts filled with dancing and music, and village homestays arranged by the National Park of American Samoa.

The fa’a Samoa way of life revolves around family, faith, and an ancient hereditary chieftain system. Family heads and chiefs are called matai, but every member must perform special family duties called tautua. Children run the show during the Samoan Children’s Mass, spending several hours cooking and gathering the adults to attend morning church services. The children are then rewarded for their choir performance and hard work with new clothing and presents.