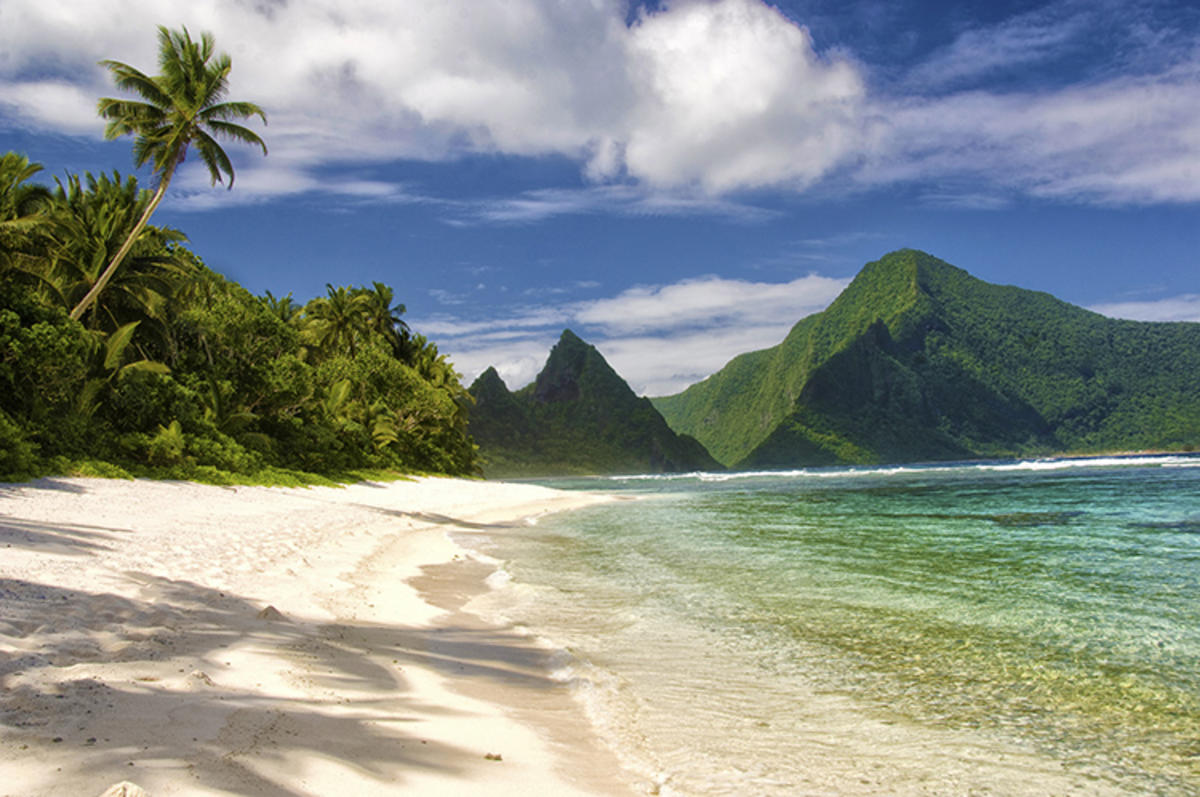 As the southernmost national park on United States territory, American Samoa’s only national park extends across the islands of Ofu, Tutuila, and Ta’u. The Pago Plaza visitor information center is the first stop for most, one of the most recently established on United States territory. Rainforests and volcanoes dominate the dry landscape, but the park also includes many outstanding coral reefs. Although there are no lodging facilities and camping is prohibited, visitors have the unforgettable opportunity to spend a night with a Samoan family through the park’s unique homestay program. Weaving fans and mats is just one of the traditional village activities visitors can enjoy during their overnight adventure. Address: Superintendent, National Park of American Samoa, Pago Pago, AS 96799 Phone: +1-684-633-7082 Website: http://www.nps.gov/npsa/index.htm

An eroded volcanic crater envelops this unusual coral reef on Tutuila where countless tropical fish, sharks, shellfish, and other exotic sea creatures frolic beneath surface. The most remote and tiniest of all national marine sanctuaries in United States territories, Fagatele Bay was established in 1986 to protect American Samoa’s unusual sea life and coral reefs, and is one of the safest and most popular scuba diving and snorkeling spots. Address: Fagatele Bay National Marine Sanctuary, P. O. Box 4318, Pago Pago 96799 Phone: +1-684-633-5155 Website: http://fagatelebay.noaa.gov/

John Williams, the first Christian missionary to set foot on American Samoa, established this impressive church in the village of Leone in 1832. Leone may no longer be Tutuila’s Polynesian capital, but it remains the island’s second largest community and its church continues to attract worshippers from around the globe. Leone Church boasts an intricately carved wooden ceiling, stunning stained-glass windows, and beautiful seaside views from its three towers. Address: Southwest Tutuila Phone: n/a Website: n/a

Few beaches on Earth offer as much privacy and seclusion as the stunning 2.5-mile Ofu Beach along its namesake volcanic island’s south coast. Snorkelers and scuba divers alike can spot up to 150 different coral species and almost 300 types of tropical fish in the waters here. Address: South Ofu Island Phone: n/a Website: n/a

The community of Ottoville is home to one of American Samoa’s best preserved star mounds. Chiefs built these ancient stone structures for their sport of pigeon catching, which was heavily discouraged after the arrival of Christian missionaries with guns. Pigeon catching may no longer be commonly practiced in American Samoa, but Ottoville’s Tia Seu Lupe building is an impressive reminder of times past. Address: Ottoville Phone: n/a Website: n/a

An exhibit about American Samoa’s important role in the Apollo Moon Missions is among the main highlights of this Fagatogo institution, one of the largest museums in all of American Samoa. Three stones from the moon and the tiny American Samoa flag Apollo astronauts gave to former president Richard Nixon are now prominently displayed. The building itself has historic significance as it housed the former American Navy Commissary and Garage before the museum was established in 1971. Address: Fagatogo Phone: +1-684-633-4347 Website: n/a

About 97 percent of American Samoa’s population of seabirds soars above Rose Atoll, the southernmost of all United States territories. No humans live on this wildlife reserve which was not seen by Western eyes until 1819. Although all potential visitors must receive permission from the US Fish and Wildlife Service, those who are granted access can lay eyes on several bird, fish, and plant species not found anywhere else on Earth. Address: Rose Atoll Marine National Monument, c/o National Park Service, Pago Pago, AS 96799 Phone: +1-684-633-7082 Website: http://www.fws.gov/roseatoll/

Click here to learn about American Samoa's Food and Restaurants