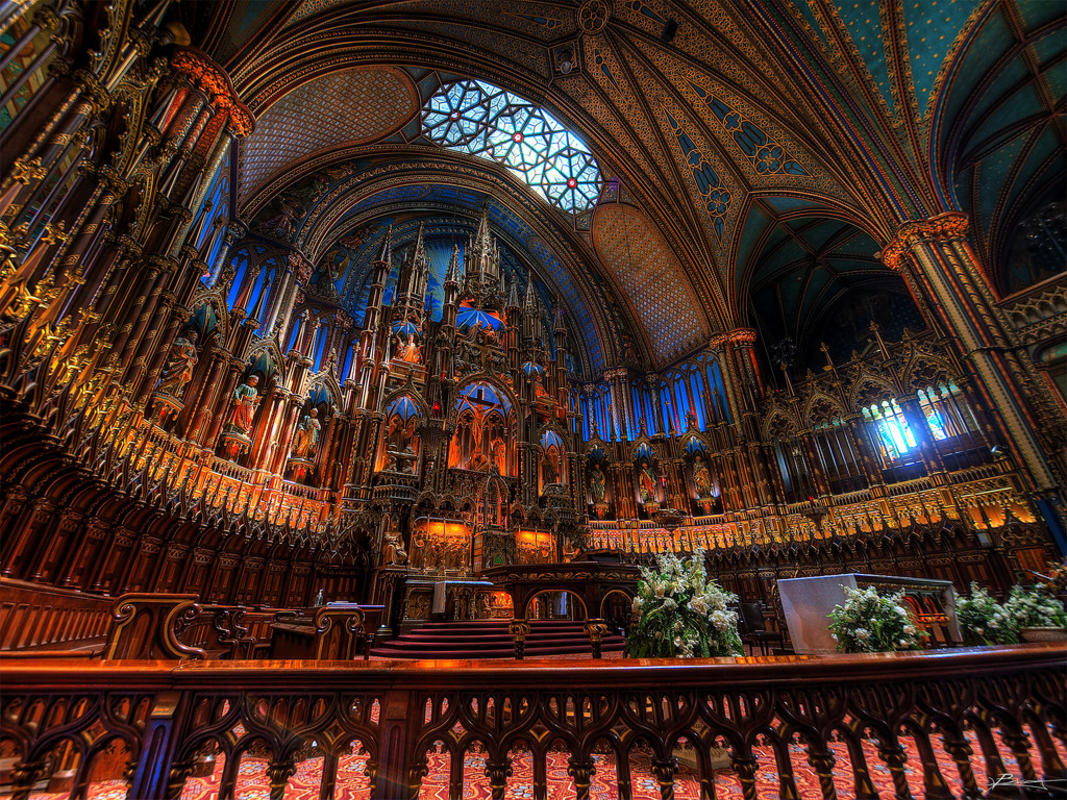 Although Québec first became British territory in 1759 and joined the predominantly English-speaking country of Canada in 1867, the 1774 Québec Act permitted its French Catholic majority population to preserve their religion, language, and French civil law code to this day. Québec, however, has had a significant English-speaking population since the 18th century, and has welcomed growing numbers of immigrants from around the world.

In 1535, Cartier sailed along the St Lawrence River past two Iroquoian villages named Stadacona, close to present-day Québec City, and Hochelaga on the island of Montréal. Québec’s first French settlement, Charlesbourg Royal, was established near the present-day Québec City suburb of Cap-Rouge in 1541. Harsh winter weather and Iroquois attacks caused the settlement of 400 people to be abandoned just a year after it was founded.

France’s new North American territory was largely neglected until 1608, the year Samuel de Champlain founded Québec City, the province’s first permanent settlement and one of the oldest cities on the entire continent. Despite many deaths from diseases, starvation, and frigid winters, the new colony’s population steadily grew, albeit at a much slower rate than neighboring British North America.

By the mid-18th century, New France’s population was 60,000 while the 13 colonies which would become the United States boasted over a million people within a much smaller space. In 1756, New France became a battleground during the Seven Years’ War, which culminated in the 1759 Plains of Abraham battle outside of Québec City’s walls. Today, the Plains of Abraham (835 Wilfrid Laurier Avenue, Québec City) houses an interactive discovery pavilion.

British general James Wolfe and French general Louis-Joseph, Marquis de Montcalm, were both mortally wounded during this pivotal battle. Four years later, New France and most other French North American territories were ceded to Great Britain in the Treaty of Paris.

The British passed the 1774 Québec Act granting their French-speaking subjects the right to practice their Catholic faith and French civil law in order to secure their allegiance to the British in the face of growing unrest in the 13 colonies. American Revolutionary soldiers staged an unsuccessful invasion of Montréal in 1775.

After the American Revolution, the territory called Lower Canada welcomed many English-speaking Loyalists alongside its French-speaking majority. Most of the Loyalists settled in Montréal and the Eastern Townships to its south. The British army ended the 1837 and 1838 Lower Canada Rebellion, resulting in the union of Upper and Lower Canada into a single province.

The 1960’s Quiet Revolution peacefully transformed Québec from a largely conservative Catholic society to a secular and liberal society with a growing sense of nationalism, resulting in the 1976 provincial election of the Parti Québecois, a political party supporting Québec’s independence from the rest of Canada. Québec’s citizens twice rejected Québec sovereignty during 1980 and 1995 referendums on the subject.

There has been much debate on the relationship between Québec and the rest of Canada ever since Québec was the only Canadian province not to sign Canada’s 1982 constitution. However, talk of sovereignty has been put on the back burner since Canada’s House of Commons passed a 2006 motion declaring the Québécois as ‘a nation within a united Canada.’

Visitors need only turn on the television or glance at supermarket tabloids during their stay in Québec to appreciate the province’s unique culture. Most of the actors, singers, and other Québécois celebrities on the covers of the province’s magazines are largely unknown in the rest of Canada, with the glaring exception of internationally famous chanteuse Céline Dion. Another Québécois act which has achieved worldwide fame is Cirque du Soleil, whose amazing acrobats have taken their daring feats to Las Vegas.

The more highbrow side of Québec’s culture can best be seen at the province’s over 400 museums. Gatineau’s Canadian Museum of Civilization (Gatineau) welcomes more visitors than any other museum in all of Canada, while Québec City’s Musée national des beaux-arts du Québec boasts an unrivalled 17th century Québec art collection. The Montréal Museum of Fine Arts ranks among Canada’s oldest art galleries. Immigrants from Haiti and other predominantly French-speaking countries across Europe, Africa, and Southeast Asia have made their own unique contributions to Québec’s cultural fabric.