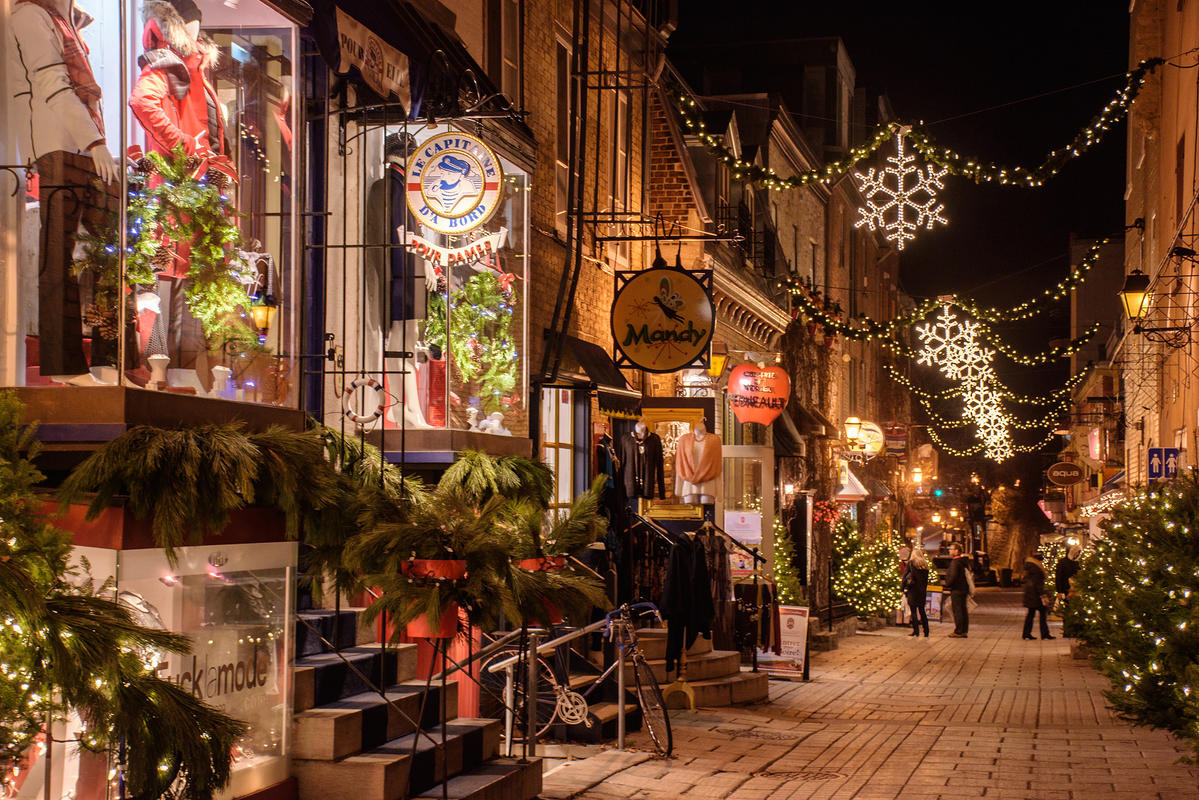 Québec City’s winter carnival, the largest on Earth, may be Québec’s most famous celebration, but it is by no means the only festival in this lively province. Ottawa’s annual Winterlude festival extends across the river to Gatineau, home of the festival’s Snowflake Kingdom park. A week before Canada Day, the Québec holiday called St Jean Baptiste Day, is celebrated with parades, fireworks, bonfires, and an endless sea of blue and white fleur de lys flags.

Each year, roughly a million people brave the middle of Québec City’s freezing winter to attend the world’s biggest winter carnival, whose snowman mascot, Le Bonhomme Carnaval, has become world famous. The first day of Lent is also the first day of this two and a half week long ice and snow celebration filled with horse-drawn sleigh and dogsled rides as well as ice and snow sculpture contests. An ice dungeon stands beneath the impressive Ice Palace at Jacques Cartier Square, but visitors can even spend their nights at the equally legendary Ice Hotel. Some visitors even strip down to their swimsuits to bathe in Québec City’s snow.

The entire province of Québec shuts down on June 23 and 24 to celebrate what they simply call ’la fête nationale’ or their national holiday in honor of French Canada’s official patron saint. Five cannon shots and a large bonfire marked New France’s first St Jean Baptiste Day on the St Lawrence River banks in 1636. Although each Québec community marks ‘la St Jean’ in their own festive way, no celebration is bigger than the one in Montréal, which starts with a parade filled with circus performers, music, and giant replicas of famous Québec figures and ends with a huge bonfire and fireworks display. St Jean Baptiste Day was once a fairly controversial event associated with Québec sovereignty, but has now grown into a more inclusive event which welcomes Québécois and visitors of all ethnic groups. Musicians have performed in English, Creole, and Algonquin alongside French-speaking artists and Montréal’s Chinatown vendors sell dragon beard candy at their vibrant street sale.

In 1994, the Guinness Book of World Records officially confirmed Montréal’s annual jazz festival as the biggest in the world. About 12,000 people attended the first Montréal International Jazz Festival in 1980, when Ray Charles was the biggest act on the bill. Today, approximately two and a half million visitors attend this festival’s over 650 concerts performed by 3,000 jazz artists on 10 indoor and 10 outdoor stages. Much of Montréal’s downtown area is closed to motorized vehicles during this 10-day festival, which starts at the end of June and lasts until July.

This bilingual Montréal comedy festival is not only the biggest in Canada, but the whole world. French-speaking comedians dominate the first half of this month-long July festival, which English-speaking Canadians get their chance to shine during the festival’s second half. Pantomimes, acrobats, and other non-verbal acts eliminate the language barrier altogether throughout the festival’s duration, especially in Montréal’s Latin Quarter during the day. This festival has become an important opportunity for comedians to show off their best jokes in front of managers, agents, and other influential entertainment industry professionals. In 2005, over 125 short films were screened at the festival’s Comedia comedy film festival. Festival highlights are broadcast on both English and French Canadian television throughout the year.

Québec City’s annual summer festival may not be as internationally famous as its winter counterpart, but it is no less fun to attend. Over a million people attended the festival’s musical performances in 2007, a larger number of people than any other Canadian outdoor concert. This 11-day festival, which begins on the first week of July, also features children’s cartoons and other events at the ‘place de la famille’ as well as street performers across the city. The historic Plains of Abraham are the biggest of the festival’s three outdoor venues.

One of Québec’s most multicultural festivals takes place in the small city of Drummondville, situated roughly halfway between Montréal and Québec City. What began as a modest folklore festival has now grown into an 11-day extravaganza attracting more than 300,000 visitors to Drummondville’s Woodyatt Park each early July. The Mondial des Cultures now ranks among the world’s four biggest folk festivals and attracts over 430 dance, music, and other artistic acts from no fewer than 90 different countries. Visitors can meet and even dance with musicians and folk dancers at the Folkothèque Bluberi, sample foods and games from around the world at the Pavillon des Cultures, or admire the handmade crafts sold at the International Market and Artisans Boulev’Art. There is also a designated youth area for children between two and 12 years of age as well as an international parade through Drummondville’s streets.

The city of Gatineau celebrates each Labor Day with this annual hot air balloon festival attended by over 200,000 visitors each year. Up to 150 colorful hot air balloons from all corners of the world soar above the National Capital Region’s skies during this four day festival. The North American Strongmen Competition featuring six competitors from both Canada and the United States takes place at the same time as the hot air balloon festival. The festival also features the Ottawa Valley’s biggest amusement parks, three stages filled with musical performances, a circus, a mini zoo, and over 300 other events.

For two weeks between August and September, Scotland and Ireland replace France as Québec City’s most dominant culture at this annual Celtic festival within Old Québec’s historic walls. The festival celebrates its first weekend with a theme night and continues with a sports weekend filled with Gaelic football matches and other thrilling Celtic sporting activities. A Sunday afternoon Gaelic banquet is this festival’s delicious closing event.

In 1999, this western-themed festival in the small village of St Tite, situated about halfway between Québec City and Montréal in Québec’s Mauricie region, was named North America’s best outdoor rodeo. Today, this may be Canada’s most famous western-themed festival and rodeo east of the Calgary Stampede. The festival’s centerpiece may be its annual rodeo, which began as a leather industry promotional event in 1967, but is now just one of many of this nine-day festival’s exciting events. Around 450,000 visitors attend this festival’s line dancing displays, train rides, moonlit movie screenings, and other fun activities.