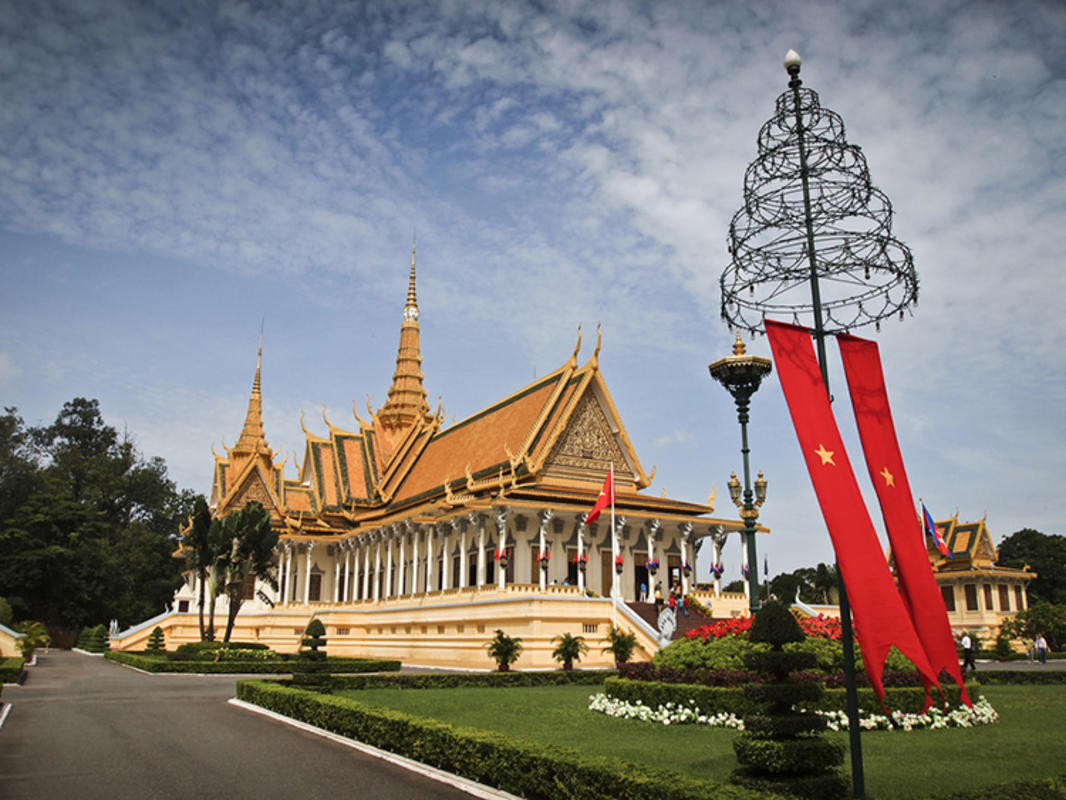 The mention of Cambodia has traditionally conjured up images of two things – the breathtaking Angkor Wat temple and the relics of its scarred past: Tuol Sleng and the Killing Fields. While these cultural fixtures remain must-sees, there are many other compelling and exciting attractions in the kingdom. Increased tourism has rapidly increased offerings in Cambodia, with the former French getaways of Kampot and Kep, and the islands off the coast of party town Sihanoukville, all firmly established visitor destinations. Phnom Penh, with its rich history and rapidly changing skyline, has enough to feed any culture vulture, and luxury is much closer than it once was.

The Angkor Wat temple complex is one of the greatest remaining structures of the ancient world. Built by King Suryavarman II in the 12th century in the former capital of the once dominant Khmer Empire, it was initially a Hindu temple dedicated to the god Vishnu, but later became a Buddhist site. It is the biggest symbol of Cambodian national pride and naturally the kingdom’s largest tourist attraction best experienced at either sunrise or sunset as the changing light creates a spellbinding atmosphere. Address: Angkor Archaeological Park, near Siem Reap, northwestern Cambodia Phone: n/a Website: n/a

Tuol Sleng Museum (S-21 Prison) and the Killing Fields of Choeung Ek both serve as savage reminders of Cambodia’s harrowing past. However, it is important to visit both sites, not only to pay respect to the innocent victims of the Khmer Rouge, but to try and understand why the atrocities occurred. Located in an old high school, S-21 Prison was used to detain supposed enemies of the state, who were brutally tortured and, more often than not, sadistically murdered. Walking around the museum you will see the beds upon which prisoners once slept, and horrendous tools used to torture victims. Usually prisoners were taken 12 miles outside of town to be massacred and buried in shallow graves in the fields of Choeung Ek – later to be aptly dubbed the ‘Killing Fields’. Address: Street 113, Phnom Penh (Tuol Sleng), 12 miles outside of Phnom Penh (the Killing Fields) Phone: n/a Website: www.tuolsleng.com

Once favored retreats for members of the French colonial administration, Kampot and Kep have recently seen a surge in local and foreign tourism, with numerous developments cropping up. A quaint riverside town steeped in aging French colonial architecture, Kampot is a great base from which to explore the surrounding countryside, including Bokor National Park. It is home to one of the world’s most sought-after peppers, the Kampot. While there is no beach, just 40 minutes away by car is the even sleepier coastal community of Kep. With its tasty crab markets, spectacular sunsets and surrounding natural beauty, Kep-Sur-Mer, as it was once fondly known, often keeps visitors lingering far longer than expected. Address: Kampot Province, southern Cambodia Phone: n/a Website: n/a

Built in the 1860’s by the revered King Norodom, the Royal Palace compound is home to a number of grand ceremonial buildings and bucolic, shaded gardens. Among the construction is the spectacular Silver Pagoda, named for its floor, which is covered in more than 5,000 silver tiles―one of only attractions in Cambodia that oozes sheer opulence of the once wealthy Khmer Empire. The pagoda’s centerpiece, the Emerald Buddha, is apparently made from Baccarat crystal, while surrounding it stand life-sized gold Buddha statues adorned in a splendid array of diamonds and fanciful relics; a true feast for the eyes. Although the compound is of considerable size, most of the grounds are taken up by the king’s living quarters, where the current monarch Sihamoni resides today. Address: Sothearos Blvd, Phnom Penh Phone: +855-23-992-953 Website: http://www.phnompenh.gov.kh/phnom-penh-city-royal-...

Located within walking distance of the Royal Palace, the traditionally designed National Museum, constructed in 1920, is home to the finest collections of Khmer sculpture from the past 1,000 years, including some notable pre-Angkorian displays. The main features include impressive statues of Hindu gods Shiva and Vishnu, hailing from AD 870 and the 7th century, respectively, and an exquisite effigy of the warrior king Jayavarman VII. There is also a range of post-Angkorian Buddha figures which were rescued from Angkor Wat during the civil war. Address: Sothearos Blvd, Phnom Penh Phone: +855-23-211-753 Website: http://cambodiamuseum.info/

Nestled in the depths of the northeastern Mondulkiri Province, the Elephant Valley Project is a refreshing way to spend time in Cambodia. A non-governmental organization run by avid animal lovers, the ecotourism project rehabilitates and conserves ailing elephants, while providing guests with priceless insight into the everyday lives of these beautiful creatures. Visitors are invited to bathe the elephants, interpert their body language, and maintain the sanctuary. All the proceeds are either reinvested into the project or go towards purchasing additional work elephants to give them a better life. Address: Sen Monorom, Mondulkiri Province, Northeastern Cambodia Phone: +855-99-696-041 Website: http://www.elephantvalleyproject.org/

Click here to learn about Food and Restaurants in Cambodia