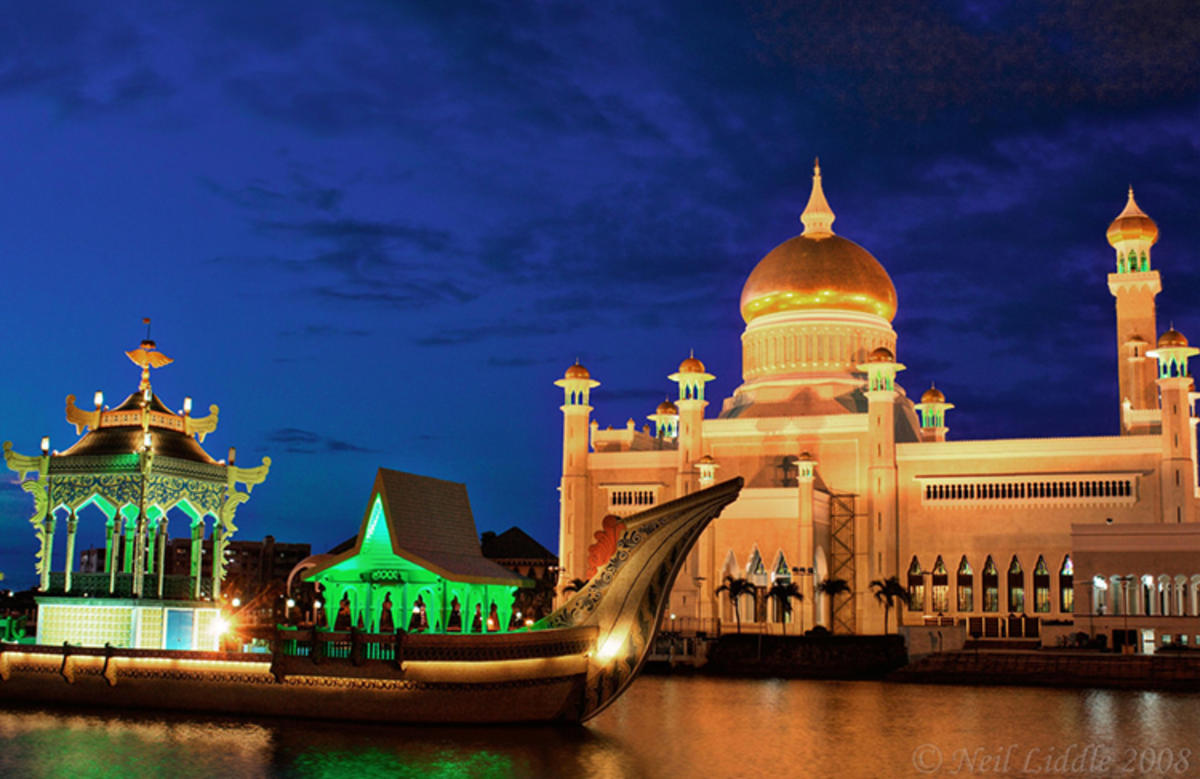 Contrary to popular belief, Brunei is not a “strict” Muslim country. Traditions are respected, but in a much more relaxed manner. If you find yourself with a few days to spend here, start by exploring the attractions of Bandar Seri Begawan, the capital known for its lovely water villages and beautiful mosques. You can then head out to the wilderness to discover the rainforests in the Ulu Temburong National Park which can be reached by boat or on land (car, bus or taxi).

The national museum of the sultanate is a must-see if you want to understand Brunei’s history, archeology, culture, art, and ethnography. It houses a display of blown glass and ceramics from the Near East dating back to the 9th and 10th centuries. Another notable exhibit is the life-size diorama of a Malay wedding. Address: Brunei Museums Department, Ministry of Culture, Youth and Sports, Jalan Menteri Besar, BB3910, Brunei Darussalam Phone: +673-224-45-45 Website: http://www.museums.gov.bn/bangunan.htm

Enjoy a one-hour scenic boat ride to Selirong Island, which is home to unique sights, sounds and wildlife such as the nocturnal colugo. The island is also noted for its three-kilometer plank walkway from where you can see the mangroves. Address: n/a Phone: n/a Website: n/a

This mosque is among Islam’s most distinctive monuments in Brunei. It was built in 1992 to honor the Sultan’s 25th anniversary on the throne. It is known for its intricate tile work and a grand terrazzo. Address: Kampong Kiarong Phone: n/a Website: n/a

The finest crown jewels are housed in this museum along with the coronation parade of the Sultan on the ground floor. Bejeweled presents from world leaders are also on display on the upper levels of the Royal Regalia Museum. Address: Bandar Seri Begawan, Brunei Darussalam Phone: +673-224-45-45 Website: n/a

Situated in the Temburong District of Brunei, the Ulu Temburong National Park boasts one of the biggest and most stunning rainforests in Borneo. Formerly called the “Batu Apoi Forest Reserve,” one of its major highlights is the small section with a spectacular Canopy Walkway that rises 50 meters above the ground. It’s a great vantage point overlooking the treetops where you might catch a glimpse of Bukit Belalong and tiger orchids. Address: Temburong District, Brunei Darussalam Phone: n/a Website: n/a

This famous mosque was named after the current Sultan’s father and is notable for its golden domes, fine carpets, grand chandeliers, and a minaret that rises to a height of 44 meters. It resides next to a stunning lagoon which creates a breathtaking reflection at night. The mosque is open to the public as long as there are no on-going prayers, but visitors are handed a robe to wear and shoes are not allowed inside. Address: Jalan McArthur, Bandar Seri Begawan, BS8711, Brunei Phone: n/a Website: n/a

Once an exclusive playground for the royal family, Jerudong Theme Park may have lost its extravagance, but is still a must-visit for families with children. A fun day out, it is the most expensive theme park in Southeast Asia. Address: Jerudong, Bandar Seri Begawan, Brunei Phone: n/a Website: n/a

Click here to learn about Food and Restaurants in Brunei