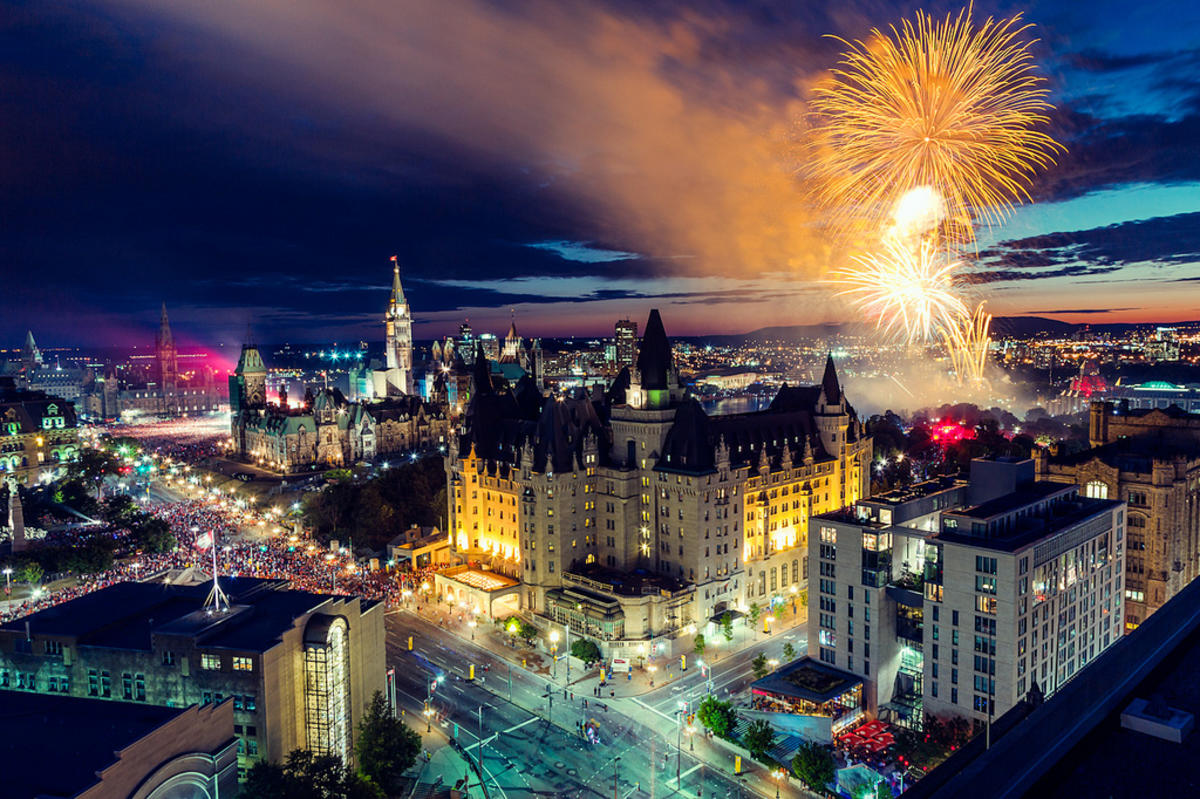 Canada may have a more relaxed reputation than the United States, but Canadians almost always manage to find a reason to celebrate and party all times of the year. Some of the Canada holidays and lively festivals, including Québec City’s Winter Carnival and Ottawa’s Winterlude, take place during the frigid winters in an attempt to wake people from their hibernation. However, summer remains Canada’s busiest festival season, when millions of spectators take to the streets during the Calgary Stampede and the Scotiabank Toronto Caribbean Carnival.

No winter carnival on Earth can match the size of this Québec City event, which begins during the first day of Lent in late February and typically lasts for two and a half weeks in the middle of Québec’s cold winter. From snow sculpture contests to dogsled and horse drawn sleigh rides and the world famous Le Bonhomme Carnaval snowman mascot, this carnival is truly a celebration of ice and snow. The hardiest of visitors can even bathe in snow wearing only a swimming suit or spend a night at Québec City’s legendary Ice Hotel. Jacques Cartier Square’s Ice Palace is another impressive ice structure, complete with frozen dungeon.

Each spring between late March and early April, at least 21,000 gray whales make their annual journey from Mexico’s Baja Peninsula to Vancouver Island’s west coast. Visitors can get up and personal by floatplane, chartered whale watching tours, or from the Pacific Rim National Park’s Wickaninnish Centre viewing station. The rocky terrain between Tofino and Ucluelet offers many whale watching opportunities.

Three million flowers sprout up in Canada’s national capital each May during the Ottawa Tulip Festival. Visitors can admire these bright blossoms aboard the festival’s shuttle service or during a guided tulip tour. Dow’s Lake Pavilion hosts the Tulip Festival Archives Central where parades, fireworks, and musical performances regularly occur in the world’s biggest tulip festival.

Recently celebrating its centennial in 2012, it’s hard to believe Calgary’s annual cowboy-themed celebration and rodeo was once a small agricultural fair. The festival has now expanded into a 10-day spectacle in July whose rodeo events are broadcast on Canadian television. Cowboy themes decorate city buildings and cowboy hats adorn the heads of visitors and locals alike as they enjoy the Stampede’s sprawling outdoor market, amusement park midway, and the morning parade which kicks off Calgary’s most famous event.

During the last weekend of July, the Six Nations of the Grand River Reserve host one of Canada’s largest First Nations festivals east of the southwestern Ontario city of Brantford. Nearly all of North America’s First Nations groups are represented among the Pow Wow Dance Competition’s more than 400 costumed dancers. Over 100 stalls serve handmade crafts and homemade food representing various global fare.

The lively Toronto festival long known as Caribana may have recently changed its name, but the continent’s biggest street fest continues to attract up to two million party-goers every summer. Toronto’s first Caribana was a gift to the city from Canada’s growing Caribbean community during the country’s 1967 centennial, but has since grown into one of Canada’s largest musical celebrations. During August’s first weekend, a huge parade filled with dancers in colorful costumes and lively Caribbean music marches along Toronto’s main streets. The festival culminates with the Parade of Bands during its final weekend.

Cape Breton Island hosts the world’s biggest Celtic festival, which lasts nine days beneath the island’s beautiful fall foliage each October. Music concerts, visual art exhibits, and interesting workshops are held, however the most popular venue may be the Festival Club at St Ann’s Gaelic College, where performers are invited to show off their talents in a more intimate setting after their official concerts end. The event attracts performers from as far away as Cuba, Scandinavia, Great Britain, and Spain.

Visitors can enjoy a taste of Germany in the heart of southwestern Ontario during North America’s biggest Oktoberfest celebration. Like its Munich, Germany, counterpart, Oktoberfest is filled with beer, bratwurst, polka performances, and people dressed in traditional German garb. To make it uniquely Canadian, the Oktoberfest parade is televised across the country during Canada’s Thanksgiving Day.

Toronto kicks off its Cavalcade of Lights holiday celebration by turning on over 100,000 sparkling lights on a gigantic Christmas tree in Nathan Phillips Square at the end of October. This is merely the largest of dozens of brilliant lighting displays throughout Toronto during this month-long holiday celebration. The festival’s heart, however, remains Nathan Phillips Square, which hosts musical performances, fireworks displays, and ice skating during the Cavalcade of Lights.