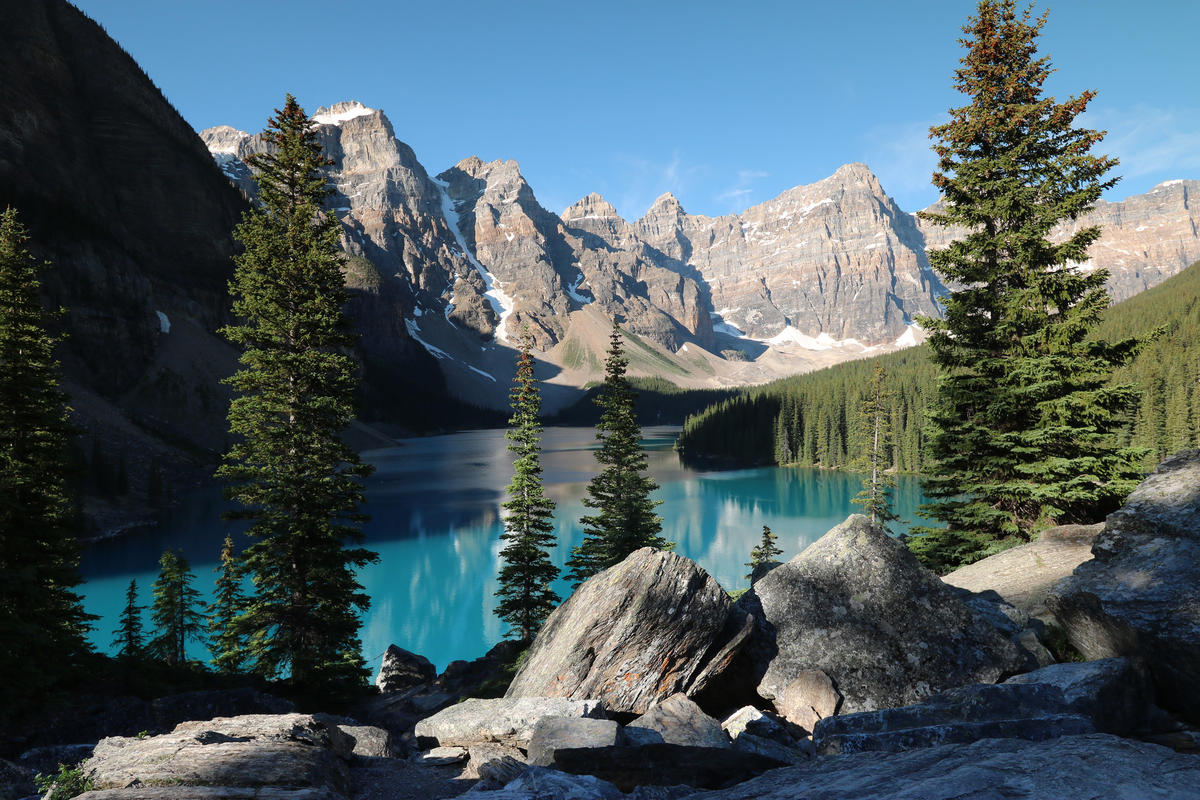 Some visitors to Canada may be surprised to find modern attractions such as Edmonton’s gigantic West Edmonton Mall and Toronto’s imposing CN Tower in this country famous for its isolated landscapes. However, natural beauty plays a large part in most Canadian attractions, from Vancouver Island’s Juan de Fuca Marine Trail to the fjords and mountains of western Newfoundland’s Gros Morne National Park. French speaking Québec City should be the first stop for visitors seeking a taste of a centuries-old European city without crossing the Atlantic Ocean.

Vancouver Aquarium, one of Canada’s finest aquariums, sits at the eastern edge of the nation’s largest park, within one of its major cities. However, the aquarium isn’t the only reason why Stanley Park welcomes over eight million visitors every year. Prospect Point, Stanley Park’s northern tip, boasts a magnificent Lion Gates Bridge view. Stanley Park is so large, its free bus services takes roughly 45 minutes to travel its entire perimeter. Other ways to sightsee include a large inland trail network, a miniature railway, and a famous paved seawall where visitors can take leisurely walks and bike rides. Address: Stanley Park Drive, Vancouver, BC V6J 5L1 Phone: +1-604-257-8400 Website: http://vancouver.ca/parks/parks/stanley/

Whistler may have hosted all of the 2010 Vancouver Winter Olympics sliding and alpine events, but North America’s most expansive ski resort also contains loads of shopping and eating opportunities at its European style villages. While the skiing is next to none, Whistler’s winter cross-country trails convert to cycling and walking trails in summer, which is also the prime season for soaking in Lost Lake Park’s warm waters or hitting any of Whistler’s three world-class golf courses. The scenic Sea to Sky Highway journey between Whistler and Vancouver is a stunning attraction in itself. Address: Southwest British Columbia Phone: n/a Website: http://www.whistlerblackcomb.com/

This breathtaking strip of Rocky Mountain parks bordering British Columbia and Alberta includes the world famous Jasper and Banff national parks, the underrated Kootenay and Yoho national parks, and three beautiful British Columbia provincial parks. Aside from some of Canada’s finest skiing and the attractions within Jasper and Banff, this park network contains some of the best preserved fossil fields on Earth at the Burgess Shale and the meeting point of the Athabaska, Columbia, Fraser, and North Saskatchewan river headwaters. Address: Alberta and British Columbia’s Rocky Mountain border Phone: n/a Website: http://whc.unesco.org/en/list/304/

Parliament Hill may be the best known attraction in Canada’s national capital, but visitors don’t need to be political buffs to enjoy their stay. Ottawa’s more active pursuits include cycling, jogging, or walking along Gatineau Park’s public paved trail network in summer or ice skating along the Rideau Canal, the world’s longest outdoor ice skating rink, in winter. Ottawa also contains dozens of museums whose fascinating exhibits can be enjoyed throughout the year. Address: Central Ontario Phone: n/a Website: n/a

The American Society of Civil Engineers placed the CN Tower on its seven modern wonders of the world list in 1995 for its striking glass design. With more than two million annual visitors, the Western Hemisphere’s tallest free standing structure provides a view like no other. All six of the CN Tower’s glass elevators climb the 147 floors to the SkyPod observation deck, the highest observation deck on Earth, in less than a minute. SkyPod visitors can see as far away as Niagara Falls and the state of New York during clear days. The 360 Restaurant, whose view overlooks Toronto, is especially beautiful at sunset and takes about 72 minutes to make a full rotation around the city. Though the entire tower was built with a glass floor, if you’re truly fearless, try EdgeWalk, the world’s highest full circle, hands-free walk on the exterior ledge of the building. Just don’t look down. Address: CN Tower, 301 Front Street West, Toronto, ON M5V 2T6 Phone: +1-416-868-6937 Website: http://www.cntower.ca

Countless vineyards, casinos, and theme parks surround the magnificent Niagara Falls, on the border between southern Ontario and the American state of New York. Although Niagara Falls has long been a popular honeymoon destination, the nearby vineyards of Niagara on the Lake have now become the region’s most romantic getaway. Visitors can see the waterfall up close aboard the Maid of the Mist which sails beneath the pounding water, take the Journey Behind the Falls on foot, or ride the Whirlpool Aero Car above the falls. Niagara Falls is illuminated until midnight each summer evening and is the site of stunning fireworks displays on Friday and Sunday summer evenings. Address: Southern Ontario Phone: n/a Website: http://www.niagarafallstourism.com/

The breathtaking northern Cape Breton national park contains just one-third of the scenic Cabot Trail drive across Nova Scotia’s biggest and northernmost island. The countless rocky coastlines, mountains, forests, and waterfalls within eastern Canada’s first national park are bordered by Atlantic Ocean beaches on the park’s Ingonish side and a picturesque French speaking village called Chéticamp on the west side. Ingonish’s 18-hole Highland Links is one of the world’s few golf courses which visitors can enjoy as walkers rather than golfers. The park is named after the area’s dominant tundra-like plateau landscape and the full 185 mile Cabot Trail is ranked among the world’s most outstanding scenic drives. Address: 37639 Cabot Trail, Ingonish Beach, NS B0C 1L0 Phone: +1-902-224-2306 Website: http://www.pc.gc.ca/pn-np/ns/cbreton/index.aspx

Prince Edward Island may rank among Canada’s smallest national parks, but its 37-mile long stretch along the province’s north shore is filled with beautiful beaches, sand dunes, and protected wetlands. It has been designated a Canadian Important Bird Area thanks to its status as a piping plover nesting habitat. The iconic Green Gables home where Lucy Maud Montgomery’s famous novels were set and the Victorian beachfront Dalvay-by-the-Sea inn are also situated within the park’s boundaries. Address: 2 Palmers Lane, Charlottetown, PE C1A 5V8 Phone: +1-902-672-6350 Website: http://www.pc.gc.ca/pn-np/pe/pei-ipe/index.aspx

North America’s first known European settlement was established on Newfoundland’s northernmost tip nearly five centuries before Christopher Columbus made his first voyage across the Atlantic Ocean. L’Anse aux Meadows, first unearthed by modern archaeologists in 1960, remains North America’s only known former Viking settlement outside of Greenland. It is believed it was a Viking camp and base for excursions to the land Eric the Red called Vinland, which may have extended as far south as present day New Brunswick along the St Lawrence River. The Viking Trail Pass grants visitors entry to Port au Choix, Red Bay, and Grenfell historic properties, as well as the Gros Morne National Park of Canada, whose towering mountains and fjords must have undoubtedly reminded the Viking settlers of their homeland. Address: Northern Newfoundland Phone: +1-709-623-2608 Website: http://www.pc.gc.ca/eng/lhn-nhs/nl/meadows/index.a...

Click here to learn about Food and Restaurants in Canada