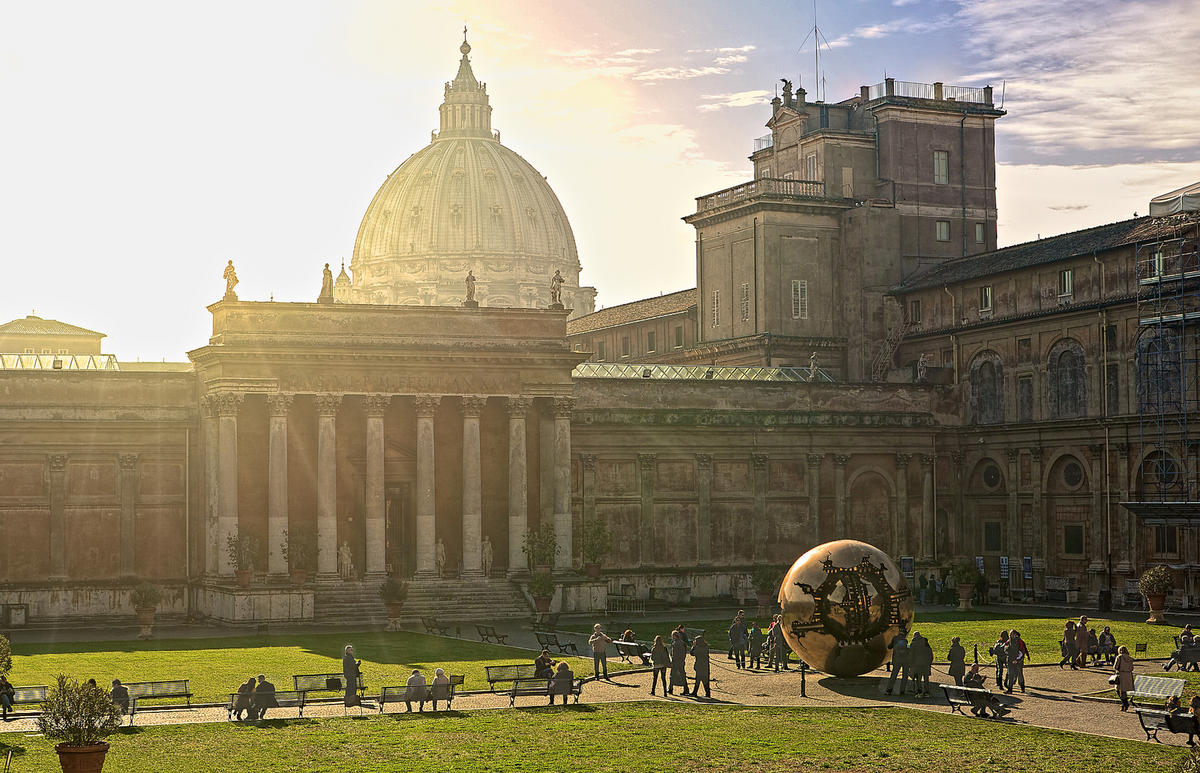 For such a tiny city, the Vatican packs a mighty punch with its museums, basilica, and gardens. Visitors will be greeted by the colorful Swiss Guards before being wowed by the vast St Peter’s Square. Touring St Peter’s Basilica, the Vatican Museums, and the Vatican Gardens is best done by organized tour, which allows visitors to skip the long lines and gain an in-depth background to the religious men and artists who have contributed to the Holy See’s rich heritage.

The Corpo della Guardia Svizzera, or Swiss Guards Corps, is an iconic sight at the entry points to Vatican City. Posted to protect the Pope, the guards don different summer and winter attire, but both seasonal outfits are colorful ensembles that are reminiscent of Renaissance soldiers’ uniforms. Introduced in 1506, the guards make up the globe’s smallest and oldest standing army. Address: entrances to Vatican City Phone: n/a Website: n/a

The Vatican’s best known landmark is praised for its dome, designed by Michelangelo. The well-proportioned design of the building means its hugeness is often overlooked by visitors who are primarily awe-struck by its interior beauty. Yet a monument as large as the Statue of Liberty could fit below the dome, which stands 120 meters from the floor. Security for this special building is high so expect to pass through a metal detector. The church and mass are open to the public daily from April to September and again from October to March (closed Wednesday mornings), as is a section of the roof, which allows access to the top of the dome for magnificent views. Don’t miss the crypt which houses the grave of Pope John Paul II. Photography is allowed but shorts, sleeveless tops, and short skirts are not. Address: St Peter’s Basilica, Piazza San Pietro, Vatican City Phone: +39-66-9883712 Website: http://saintpetersbasilica.org/

Visitors to the piazza should try stepping on one of the two stones that side the square, where the view of the colonnades’ four columns is obscured to seem as though there is just one column. The piazza’s fountains, designed by Bernini and Maderno, are must-sees, as is the obelisk, brought from Egypt in 37 AD and once used to mark the spine of the Circus of Nero. The circus, which was situated on the site of today’s basilica, was known as a location for the persecution of Christians, including St Peter who was crucified here. Today, the obelisk is topped by a star which allegedly features pieces of the True Cross. Address: St Peter’s Square, Vatican City Phone: n/a Website: n/a

Open Monday to Saturday and the last Sunday of the month, the 500-year old Vatican Museums is a collection of some of the globe’s greatest art galleries. Best known for the Sistine Chapel, its spiral staircase, and the Raphael Rooms, the museums must be toured by one-way route due to the crowds, with the museums receiving over five million visitors a year. The Renaissance art on display is overwhelming, with works by masters such as Leonardo da Vinci, Caravaggio, and Titian on show, while many Greek and Roman finds are also housed within. The Sistine Chapel, where photography is not permitted, features what are commonly considered some of Michelangelo’s best frescos, among works by other masters, mostly painted in the early 16th century. Visitors must cover their shoulders and wear long trousers or a skirt of length. Expect long queues to get in unless you book a tour. Address: Vatican Museums, Vatican City Phone: +39-6-69884947 Website: http://www.museivaticani.va/3EN/pages/MVHome.html

Often hailed as one of Rome’s most fascinating buildings, this impressive Vatican structure started out as the Roman Emperor Hadrian’s mausoleum. The 2nd century AD mausoleum was built over by 14th century Popes, who constructed a castle which was for many centuries used as a prison. The Passetto di Borgo, a fortified, covered corridor, was commissioned by Pope Nicholas III to link the castle to St Peter’s Basilica. Today, the castle houses a museum. Highlights of a visit here include seeing one of the settings of Hollywood blockbuster Angels and Demons as well as the rooftop from where Puccini’s opera figure Tosca jumps to her death. Address: Ponte Sant’Angelo Rome, Province of Rome, Italy Phone: +39-6-681-9111 Website: http://castelsantangelo.beniculturali.it/index.php...

The Gardens of Vatican City, largely established in the Renaissance and Baroque eras, take up more than half of the tiny city-state’s territory. Touring the fountains, sculptures, and medieval buildings that adorn the gardens is a highlight of any visit to the state. The gardens were begun and walled on three sides by Pope Nicholas III in the 13th century. Address: Vatican Gardens, Vatican City Phone: +39-6-69881662 (Vatican Tourism Office) Website: http://www.vaticanstate.va/EN/Monuments/TheVaticanGardens/

Click here for Food and Restaurants in Vatican City