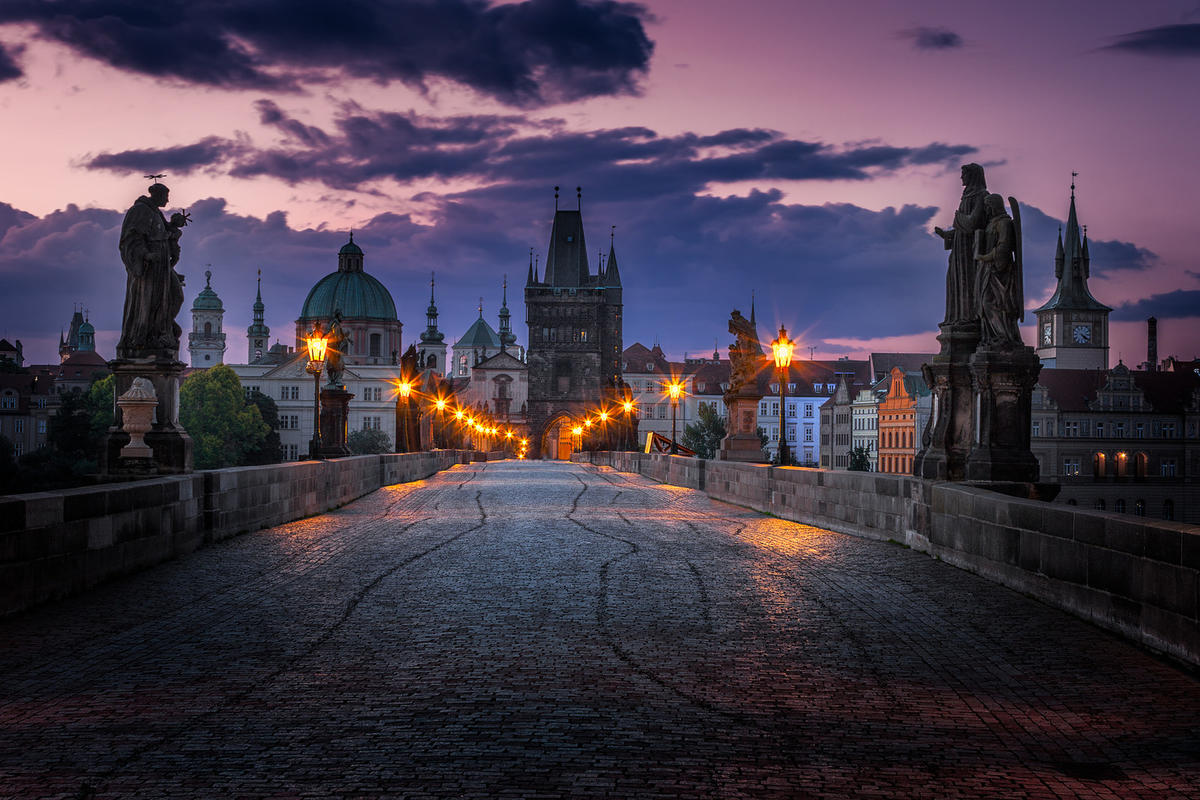 Having survived WWII with very little damage to its towns and cities, the Czech Republic boasts some of Europe’s finest medieval towns, forts, and castles. With so many of the nation’s attractions totally intact and well kept, the Czech Republic is a dream destination for history lovers. Prague, in particular, is home to a vast number of important edifices, most of which are located in a small radius within easy walking distance of each other that can be explored independently or on a guided tour of the city.

Set high on the Brno hilltop, the stunning Spielberg Castle is worth the trip, even if only for the breathtaking views of Brno city and surrounding flora and fauna. Inside this impressive, well-maintained compound you’ll find a prison, military room, barracks, memorial to the Italian carabineri, and the centerpiece, the castle. Originally built as a royal residence back in the 13th century, the fort gained military importance for the Czech Republic due to its ideal position, eventually becoming a fortress and soon after became known as the “Prison of Nations.” In 1880, it was opened to the public and in more recent years, has become the home of many important festivals, events, exhibitions, and concerts. Address: Spilberk 1, 662 24 Brno Phone: +420-542-123-611 Website: http://www.spilberk.cz

The main attraction in the Czech Republic, the Prague Castle is part of a huge compound that houses several significant historical sites atop a hill with magnificent views of the river and city. Inside, you’ll find additional attractions such as the Royal Palace, St George’s Basilica, and the large, imposing figure of St Vitus Cathedral, the city’s main Roman Catholic church and seat of the Archbishop. Traditional watchmen protect the entrance with an entertaining changing of the guard ceremony a treat for those with good timing. Other points of interest within the castle grounds include the tombs of Bohemian kings and Roman emperors. Address: Prazsky grad, Prague Phone: +420-224-373-238 Website: http://old.hrad.cz/

Often seen as the iconic center of Prague, Charles Bridge attracts visitors in droves, who take their time crossing between the Old Town and Prague Castle, admiring street artists and enjoying the people watching. Built in the 14th century, for over 300 years the bridge was only way to cross the Vltava River. Decorated with 30 statues, most of which were built in the Baroque style. The three figures of St Francis and his two angels are the most notable works of art. Address: Karluv Most, Prague Phone: n/a Website: n/a

Whereas Prague has its much loved Wenceslas Square, Brno boasts the even more impressive Namesti Svobody (Freedom Square). This pedestrianized area, originally known as Lower Market, is built around a dominating column which stands as a monument to the victims of the plague. This serene, beautiful area constructed upon the remains of the Church of St Nicolas is the perfect resting place to enjoy a drink in one of the numerous cafés and pubs and take in the hustle and bustle of the Czech Republic. Address: Brno - Namesti Svobody 17 Phone: n/a Website: n/a

A collection of attractions, historically significant buildings and sites, Prague Old Town is where you’ll discover the heart of Czech culture. Strewn with historic buildings, restaurants, cafés, taverns, and shops, the district has but one drawback; the constant stream of tourists milling about. The Old Town was Prague’s medieval settlement and not-to-miss spots include the Square, the New Synagogue and the Astronomical Clock. Address: Starometska radnice, Starometske namesti, Prague Phone: n/a Website: n/a

Among the many attractions of Prague’s Old Town you’ll find one of the few remaining medieval astronomical clocks left in the world (known as Staroměstský Orloj in Czech). The clock changes every hour, on the hour, between 9:00 a.m. and 9:00 p.m., a show which regularly draws inquisitive eyes, so get there early to secure a good spot. Legend has it that the creator was blinded after its completion to prevent him making another clock more beautiful in another city. It is said that the blind man later scaled the great walls to remove its parts, leaving the clock temporarily unable to work. Address: Starometska radnice, Starometske namesti, Prague Phone: n/a Website: n/a

For some, the Pilsner Urquell Brewery is the birthplace of the world’s finest beer. Set in the striking town of Pilsen in West Bohemi, it was here in 1842 that the famous Pilsner larger was first created and consumed. A tour is far more than just a walk through the plants; the building is home to a network of medieval tunnels and beer cellars hidden under the cobblestone streets of the old town. Address: U Prazdroje 7, 304 97, Plzeň (Pilsen) Phone: +420-377-062-111 Website: http://www.prazdroj.cz/en/

The Czech people have a love of animals, especially the rare and exotic, and Brno Zoo is perhaps the country’s most impressive animal elated attraction. The zoo recently underwent a renovation and modernization, and houses over 500 mammals, reptiles, amphibians, and birds, with examples of wildlife from every continent with the exception of Antarctica. The park is situation on the side of a large hill so moving around can involve a lot of walking, but it can make for a wonderful day out. It’s easy to get to the park from Brno center by taking the number 1 tram. Address: U Zoologicke zahrady 46, Brno Phone: +420-546-432-311 Website: http://www.zoobrno.cz/

Often stumbled upon by accident, the John Lennon wall is one of the modern highlights of the historically important Mala Strana suburb in Prague. A graffiti-covered bombardment of Beatles lyrics and tributes to the band stand in stark contrast to the leafy, cobblestone streets of the surrounding area. It’s believed that Lennon never actually visited Prague, but his songs, and moreover, those of the Beatles, had a huge impact on the nation. At the time of their greatest hits, the Czech youth were experiencing the darker side of communism which banned such music for being immoral and anti-ideological. The wall became an international symbol of peace and love shortly after the death of Lennon in 1980, and although it has been white washed several times, the graffiti quickly returns soon after. Address: Velkoprerovske namesti, Mala Strana, Prague Phone: n/a Website: n/a

Click here to learn about Food and Restaurants in Czech Republic