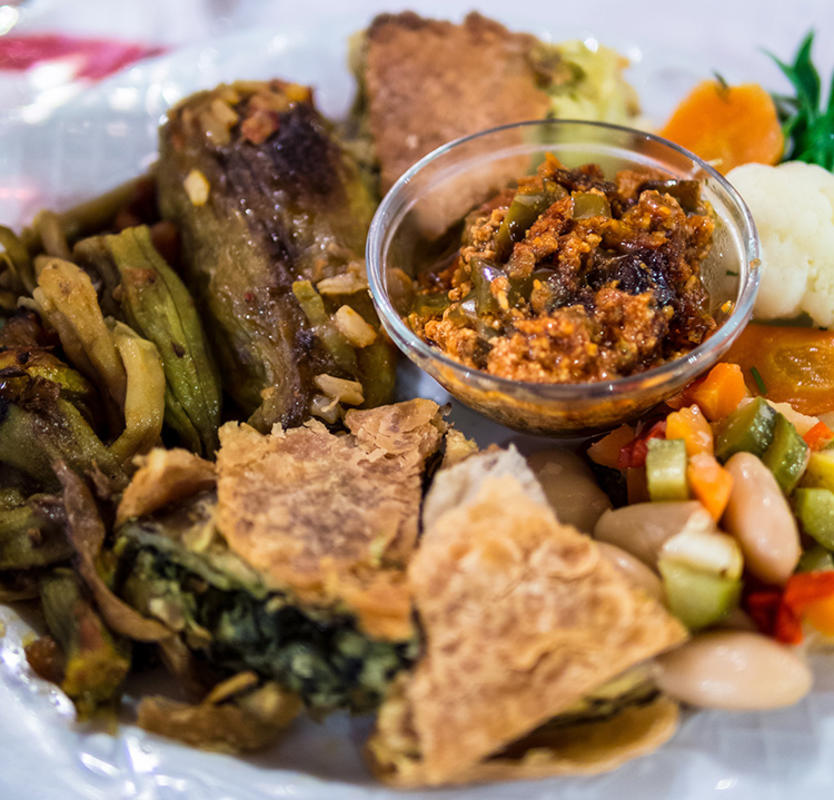 Clearly influenced by the fare of nearby countries like Italy, Greece, and Turkey, Albanian cuisine has his own distinct character and a number of regional variations. Meat - mainly lamb, beef, chicken, and rabbit - is used heavily and complemented by a variety of Mediterranean herbs and vegetables. Stews are popular, as are salads and pies so even the most remote village will be able to provide a decent meal at a snip. Many Albanians enjoy liquor, not least raki, the local plum- or grape-based firewater, and the ubiquitous Birra Korca brew. It is not unusual for an Albanian to enjoy a shot or two of raki with breakfast, to help them wake up, of course.

Bars and Pubbing in Albania

While Albanians enjoy late nights and socializing, they mainly drink in moderation, and often prefer sipping coffee to knocking back hard liquor. There are nevertheless plenty of places to bar-hop, with most in the capital, Tirana, while other cities and resorts also have plenty to keep night owls entertained.

Further afield, Oxygen Beach Bar (Rr. 10 Deshmorët e Pojskës, Pogradec) in Pogradec, near to the Macedonian border, is well worth the journey to reach it. Its beach is on the banks of a mountain lake, and the bar is open 24 hours to serve beer and cocktails accompanied by new-age music and often live bands.

Meanwhile, Mango Beach (Rug. Sarande-Butrint km2, Saranda), just across from Corfu, has carved a reputation for being the best-known nightclub in Albania.

Dining and Cuisine in Albania

Restaurants in Albania are more wholesome than classy for the most part and because the cuisine will appeal to the average fellow’s palate, they are seldom unappetizing, regardless of quality or price. Among the more high-end eateries in the capital is Prince Park (Rr. e Elbasanit Parku Kombëtar, Tirana), which is situated in an urban sprawl and resembles a hunting lodge, complete with antlers on the wall and roaring fire in winter.

Also in Tirana, Buke dhe Embelsira Franceze (Rr. Dëshmorët e 4 Shkurtit 1, Blloku, Tirana) is one of the few standout breakfast options in the city. Bordering on a European deli, it offers freshly baked breads and cakes, including baguettes and brioches, while its pain au chocolat is legendary in capital circles.

The town of Berat is blessed with the substantial Ajka (Gorica, Berat), which is stationed in a picturesque setting overlooking the Osum River, in the center of the country. As is the case across most of Albania, the food at Ajka is hearty, but provides excellent value for the money considering the quality and complements the restaurant’s setting.

Badrilko (Rr. Taulantia, Durres), a lively joint in Durres, is said to offer the best pizzas in the city, but that is just one reason to eat here. Lively, loud, and unceasingly entertaining, the venue is styled like a saloon with a vibrant terrace bar. It might be more low-brow than well-heeled, but is the experience that counts.