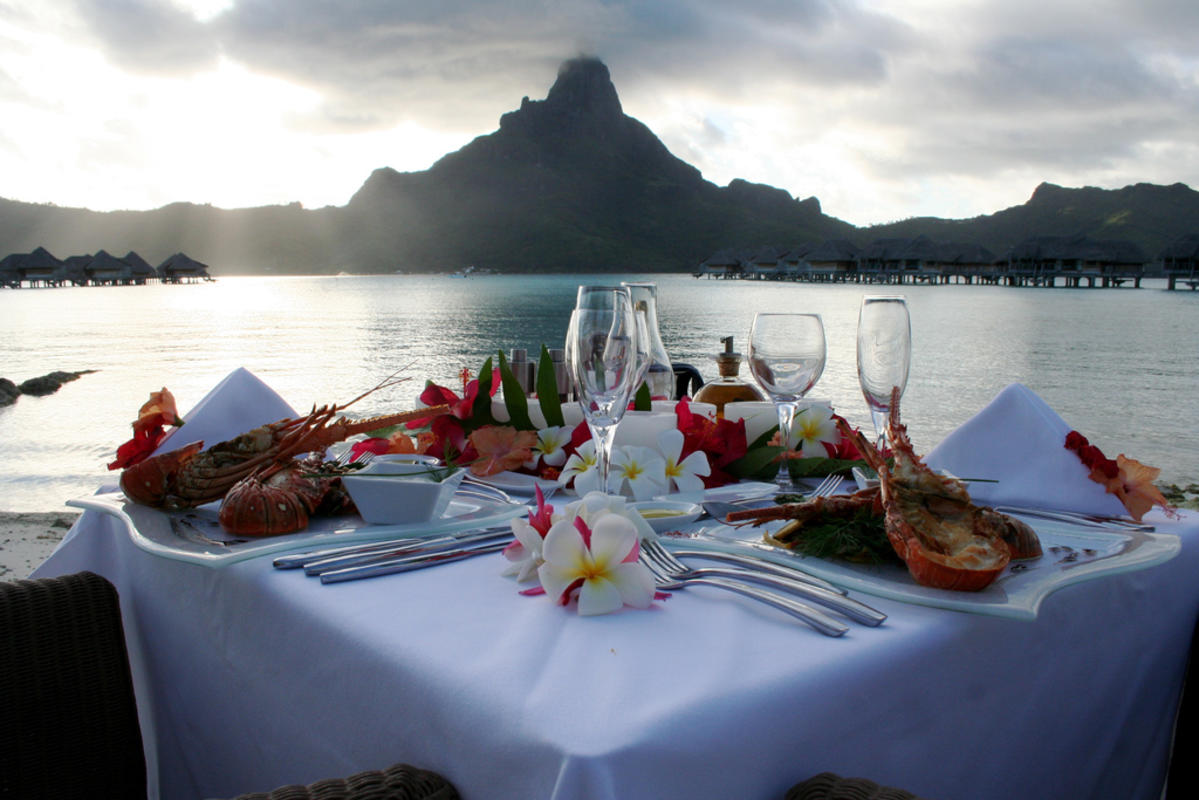 Mountain bananas, smoked breadfruit, a tropical fruit pudding called poe, a marinated fish dish named poisson cru, and suckling pig served with spinach are the most commonly served Tahitian dishes. Most of Papeete’s international restaurants specialize in French, Chinese, or Italian cuisine. All of the above cuisines are also served at the wheeled snack shops, called roulottes, along Papeete’s waterfront. Roulotte meals are also cheaper, but no less delicious, than those served in more formal restaurants. Freshly baked baguettes are also affordable as well as stuffed with nearly every other food imaginable. Most Tahitians believe tipping is contrary to their traditional definition of hospitality, which is best displayed at a large traditional tamara’a Tahiti feast cooked over hot rock layers in an underground oven. The juice from Tahiti’s noni tree is best known for its ability to improve health, while Hinano is the most common local beer.

Bars and Pubbing in Tahiti and Islands

Papeete’s lively nightlife provides a dramatic contrast to the rest of this quiet and laid-back island. Visitors can see traditional Tahitian dance shows at virtually all of the island’s large resorts, but the Grande Danse de Tahiti troupe at InterContinental Resort Tahiti (Pointe Tata A, P. O. Box 6014, Papeete) perform the same dance which seduced the HMS Bounty crew. The Captain Bligh Restaurant and Bar (PK 11.4, Punaauia) also puts on exciting weekend dance shows at some of Tahiti’s most affordable prices.

Papeete also has plenty of more conventional nightclubs from upscale private clubs where tourists are usually accepted to more down-to-earth dance halls where the locals sip on Hinano to the sounds of live guitar music. Le Morrison’s Café (Vaima Center, Seafront, Papeete) is one of the places where locals and tourists are most likely to mingle in Papeete, especially during weekend concerts and techno parties.

Le Tikisoft Café (Pont de l’est, Faaa) attracts both expats and locals because of its large drink and music selection.

Dining and Cuisine in Tahiti and Islands

Dining in Tahiti may not be cheap, but each restaurant indicates the cost of their meals with dollar signs. The cheapest restaurants have only one dollar sign, while Tahiti’s most expensive restaurants have three or four dollar signs. One of Papeete’s most affordable places to eat is Polyself (Rue Paul Gauguin, Papeete), a cafeteria where customers can simply point to order salads, sandwiches, or breakfast food. The Le Retrot (Boulevard Pomare, Papeete) sidewalk café offers affordable snacks and a Parisian-style atmosphere in front of Papeete’s waterfront.

Les 3 Brasseurs (Boulevard Pomare, Papeete) is an American-style bar where guests can enjoy hearty grilled food and beer at sidewalk tables during their waits for the Moorea ferry. L’O a la Bouche (Passage Cardella, Papeete) is one of French Polynesia’s highest rated restaurants for its gourmet French dishes and elegant atmosphere. The open-air building containing the Royal Tahitien Restaurant (PK 4, Pirae), another recommended island restaurant, has stood at the same location east of Papeete next to Pirae’s black sand beach since 1937.

Most Tahiti restaurants outside of Papeete are located in the community of Punaauia on the island’s west coast. The Western Grill (PK 12.6, Punaauia) serves up Mexican favorites and Texas steaks in the heart of French Polynesia. Le Coco’s (PK 13.5, Punaauia) offers a more romantic atmosphere and five-course French nouvelle cuisine meals served on lawnside tables overlooking Moorea. Live weekend musical performances and a children’s menu are offered alongside some of Tahiti’s spiciest shrimp at the Pink Coconut (PK 9, Punaauia).

Click here for Shopping and Leisure in French Polynesia