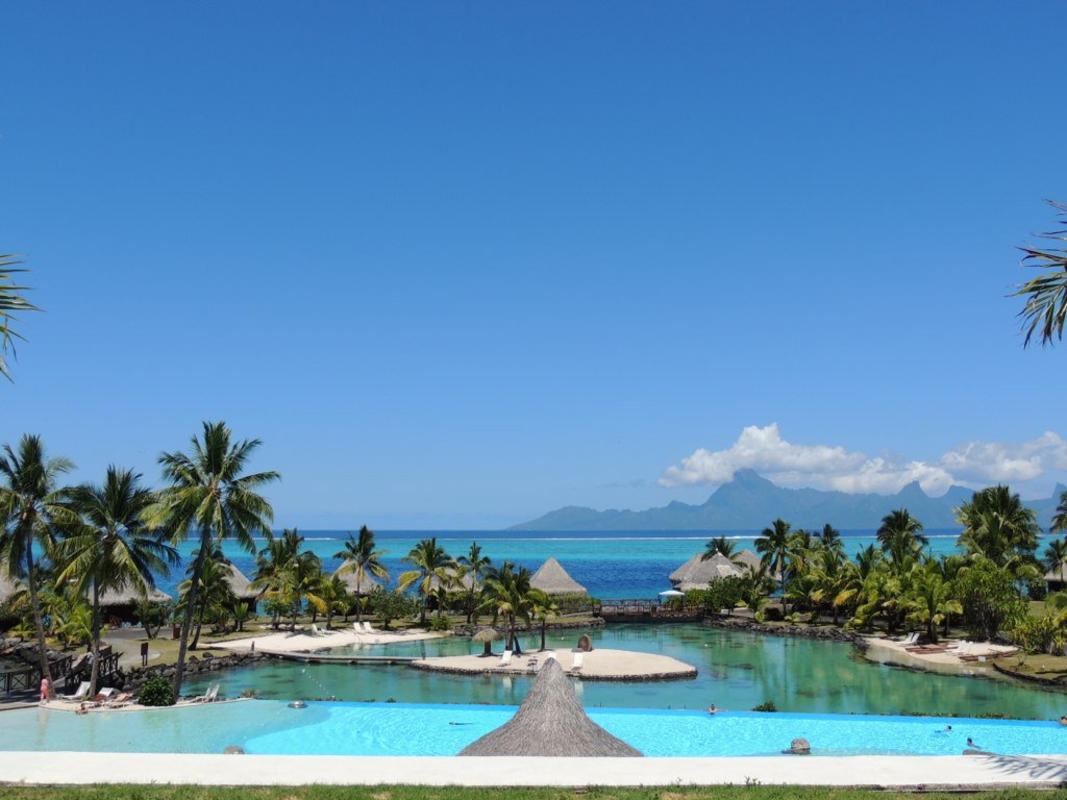 Many of Tahiti’s attractions are conveniently located along the popular 72-mile long Circle Island tour around Tahiti Nui. As long as they avoid road construction and rush hours, drivers staying on nearby Moorea can easily drive the Circle Island tour in just one day. The tomb containing Tahiti’s last king, the home of Mutiny on the Bounty co-author James Norman Hall, and Tahiti’s unique Lagoonarium are just a handful of the island landmarks along this scenic route. The livelier side of this typically laid-back island is best seen at Papeete’s bustling municipal market. The Harrison W Smith Botanical Gardens and Gauguin Museum conveniently stand next door to each other.

Arahurahu is the only one of the numerous ancient maraes which once dotted French Polynesia to be restored to its full splendor. The pigs which once lived in the stone pens close to Arahurahu’s entrance were sacrificed to the gods. This former open-air temple and meeting place now hosts live theater performances. The bright red wooden sculptures or unu which surround the marae, represent the ancestors of local families. Address: Paea, Tahiti Phone: n/a Website: n/a

Few places in Tahiti are as lively as Papeete’s bustling municipal market, held between Rue François Cardella and Rue du 22 Septembre every morning. However, the market’s busiest day is always Sunday, when vendors arrive from throughout French Polynesia to peddle their wares. Breadfruit and taro are the most common local crops Tahitians sell, while Chinese vendors usually sell produce from China or Europe. Most bakers and butchers are European or Chinese. Visitors must show up early in the morning, especially on Sundays, as some vendors start closing up shop as early as 8:00 a.m. The upstairs snack bar serves affordable meals to the sound of a Tahitian string band. Address: Papeete, Tahiti Phone: n/a Website: n/a

Museum of Tahiti and Her Islands

A coconut grove and relaxing lagoon surround this scenic museum, ranked among the finest in the entire South Pacific. A topographic map and 1939 Tahitian Bible are two of this museum’s standout exhibits. At least an hour is recommended to fully explore and appreciate all of the museum’s displays on weapons, literature, sports, games,maraes, and traditional weaving. Virtually all of the exhibit inscriptions have English translations. Address: Punaauia, Tahiti Phone: +689-58-34-76 Website: http://www.museetahiti.pf/

This museum 32 miles west of Papeete is a tribute to French artist Paul Gauguin, who called the Mataiea district from 1891 to 1893. A ceramic vase made by Gauguin is displayed alongside many more of the artist’s engravings, paintings, woodcarvings, sculptures, and other masterpieces. Visitors can see and purchase reproductions and prints of Gauguin’s masterpieces at the museum gift shop before admiring the originals in the first gallery. Address: southeast Tahiti Phone: +689-57-10-58 Website: n/a

These botanical gardens next to the Gauguin Museum were named after and founded by American Massachusetts Institute of Technology physics professor Harrison Smith, who moved to Tahiti in 1919 and remained on the island until his 1947 death. The botanical gardens and their tropical plants now belong to the public. Umbrellas are recommended for all visits to these gardens located in Tahiti’s wettest section. Address: PK 51, 2 Papeari, Tahiti Phone: +689-57-11-07 Website: http://www.pc.gc.ca/lhn-nhs/ns/grahambell

The tomb containing the remains of Tahiti’s final king was originally constructed for King Pomare V’s mother, Queen Pomare, in 1879. A few years later, King Pomare V exhumed his mother’s remains, abdicated his throne, and died in 1891 from too much drink. The red Grecian urn containing King Pomare V’s remains stands on top of a coral stone structure resembling a small lighthouse with a bright red door in front. The graves of four other Tahitian kings are located in a nearby cemetery. Address: Arue, Tahiti Phone: n/a Website: n/a

Click here for Food and Restaurants in French Polynesia