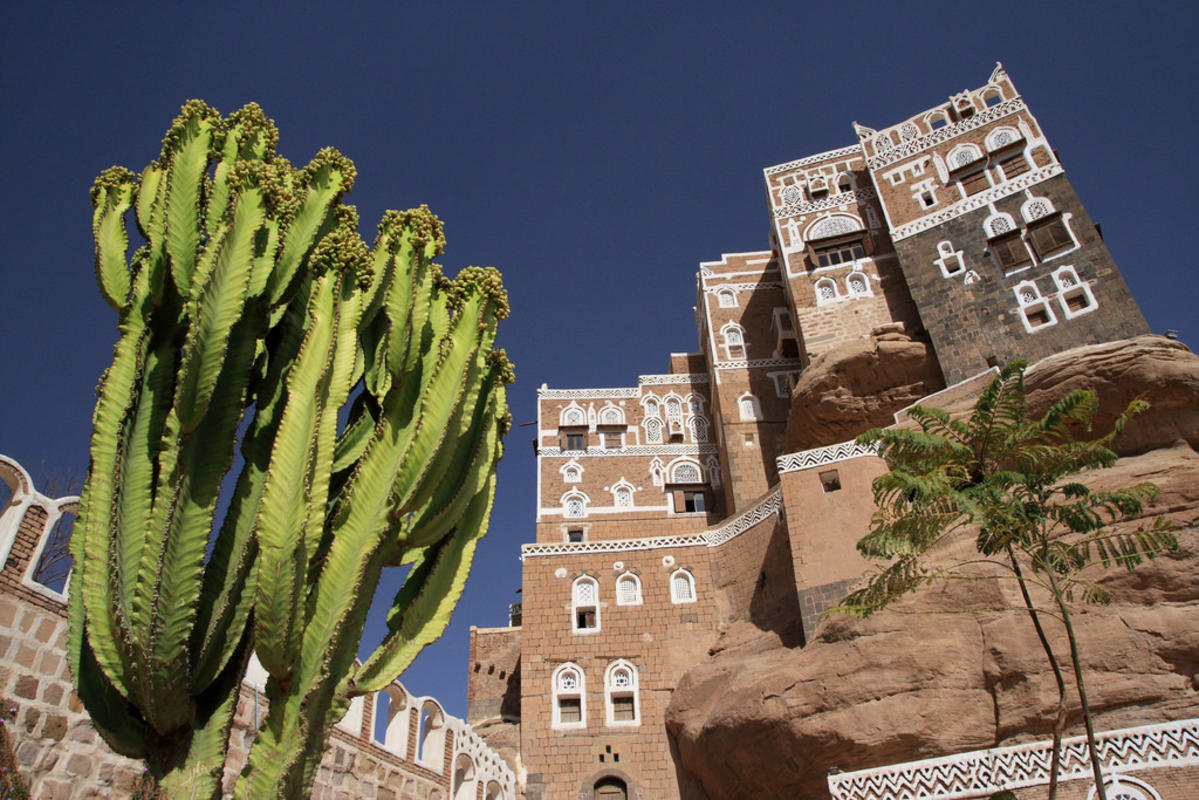 The World Heritage ancient Old City in the capital of Sana’a depicts the unique Yemeni style of architecture that dates back to over 2,500 years. The Bab al-Yemen forms the entrance to this fortified city, which is a landmark in itself. However, not all of Yemen’s history is in Sana’a. The historical town of Shibam is one of its most fascinating locations, housing 16th century mud brick-built buildings, while Ta’izz is home to the famous Jewish Sharab and the Mudhaffar Mosque.

The ancient fortified city is surrounded by up to 14 meter high clay walls. Inside the walls are over 100 mosques, 6,500 houses, and 12 hammams (baths). Bab al-Yemen is the entrance point of this fascinating old city, which is home to one of the world’s oldest mosques, the 7th century Jami’ al-Kabir (Great Mosque). Just west of the mosque lies Ghumdan Palace, which dates to pre-Islamic times. The heavily guarded Al Shab Mosque is also located within the walls and is among the world’s largest mosques. Address: Old City, Sana’a Phone: n/a Website: n/a

Pegged the ‘Manhattan of the Desert’, this amazing city has high-rises built entirely of mud-brick. The city itself dates back to the 2nd century though the houses were built in the Middle Ages as protection against the Bedouin. Around 500 of the houses here are mud-brick tower houses that contain from five to 11 stories, each with one or two rooms. Today, it is possible to walk along the narrow streets within the town and gaze at the amazing houses, some of which now house souvenir shops. Address: Shibam, Hadhramaut Governorate Phone: n/a Website: http://whc.unesco.org/en/list/192/

The 53 meter high mud minaret makes this one of the tallest mosques in the world, and definitely the tallest in Yemen. It was built in 1914 and named after Muslim leader Omar Al-Muhdar. This building is another fantastic example of the mud-brick architecture found throughout Yemen. Address: Tarim, Hadramaut Phone: n/a Website: n/a

This was the capital city of Yemen from the 13th to 15th century and today is a major historical site. It was here where scholar Al-Jazari invented algebra at its university, which was once the center of learning in Arabia. It is home to the highest concentration of mosques in the country, with some dating back to the Rasulid period. Narrow alleyways are lined with burnt brick houses that display the history of life in the early years of Islam. Unfortunately, the ancient city has been listed on the List of World Heritage in Danger due to poor upkeep and poor conservation, with many building in a state of deterioration. Still, it is one of the country’s must-see attractions. Address: Zabid, Al Hudaydah Phone: n/a Website: http://whc.unesco.org/en/list/611

This incredible palace was built by Yahya Muhammad Hamid ed-Din, the imam (Islamic leader) of Yemen in 1918. It was built just outside of Sana’a, in Wadi Dhahr, atop a protruding rock formation, giving it its name Dar al-Hajar, or Rock Palace. The five-story palace was built as a summer residence for the imam and is truly a sight to see. Stunning views can be seen through its windows and balconies, and its narrow staircases leads visitors on a confusing journey to the top. Friday mornings are the best times to visit as local men perform bara outside, a traditional dance that is accompanied by drums. Address: Wadi Dhahr, Amanat Al-Asemah Phone: n/a Website: n/a

From 115 BC to 525 AD, the Himyarite Kingdom started to build water tanks to collect and store rain water, as well as to protect the city of Aden from flooding. There were originally 53 tanks that were all connected to one another, though today only 13 tanks remain. The British government helped in the restoration process of the water-catchment tanks that today are the most famous sight in Aden. The Coghlan Tank is the largest and sits at the center of the other tanks. The tanks were made out of volcanic rock and stucco that was in turn made out of volcanic ash, making the walls watertight. The tanks were mentioned in some 7th century Islam manuscripts and appeared again three centuries later in the manuscripts of Al-Makdsi. When the British occupied Yemen in 1839, the tanks were buried in debris as a result of floods. The Brits decided to repair them to provide the public with a reliable source of water. They are no longer used today for water-catchment but are instead are a public park and attraction. Address: Cisterns of Tawila, Aden, Phone: n/a Website: n/a

This dam was given the title the eighth Ancient Wonder in the World though today it is in ruins. The 580 meter long Ma’rib Dam was built in the 8th century BC and was truly a feat of great engineering in its time. The dam was used by the Kingdom of Sheba to capture the rainfall of the monsoon and preserve it throughout the year. Ali Yanouf Bin Dhamar Ali, a ruler of Sheba, had his name carved into the dam upon its completion. In around 500 BC, the walls of the dam were raised an additional seven meters. The dam became the property of the Himyarites in 115 BC, who then raised its walls to 14 meters high and provided water works to the north and south, allowing the irrigation of up to 25,000 acres. A number of breaches led to the final demise of the dam, which happened in around 570 AD. In 1986, a new dam was built in its place, not far from the ruins of the original ancient dam. Address: Great Dam of Ma’rib, Dam Road, Ma’rib Phone: n/a Website: n/a

This incredible 17th century bridge was constructed out of limestone brick to connect the two villages of Jebel Al Amir and Jebel Feesh in the Yemeni Mountains. The magnificent bridge runs along the Dar al-Hajar and the ancient mud-brick city of Shibam, and has become an icon of the country, being seen on the YR10 coin. The bridge is remote and difficult to access, which is a big part of its appeal. Hike through the mountains, pass through remote villages, and witness magnificent architecture before the bridge is reached. Once here, enjoy the phenomenal views and beautiful surroundings. Address: Shaharah District, Amran Governorate Phone: n/a Website: n/a

This island, off of the coast of the Arabian Sea, has magnificent biodiversity, being home to 700 endemic species. The dragon’s blood tree, an umbrella-shaped tree that can be found nowhere else on Earth, lives here. Also seen on the island are the rare cucumber tree, succulent tree, Socotran pomegranate, and desert rose. There are over 120 species of birds, many of which are endangered, and 190 species of butterflies living on the island together with legless lizards, skinks, and chameleons. The marine life surrounding the island is also diverse with many endemic species. Address: Socotra Phone: n/a Website: http://www.socotraproject.org/index.php

Click here to learn about the Airports in Yemen