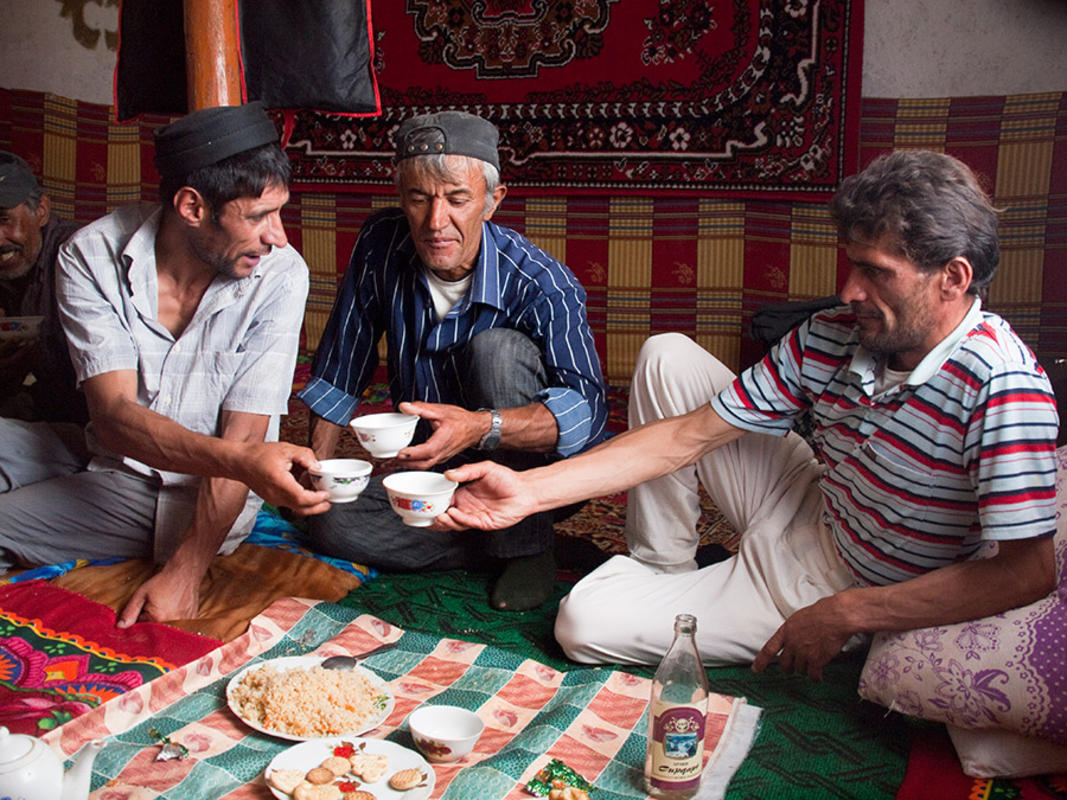 Persian Tajiks have been in the area now known as Tajikistan for more than 3,000 years, and speak an ancient language that is very similar to those of Iran and Afghanistan. The natural landscape, agriculture, and Islamic lunar calendars have done much to shape the culture of the nation, with food, customs, and festivals reflecting both the religion and particular requirements for survival in the climate of each region. Muslims make up 90 percent of a population that is largely artistic and family-oriented.

People have inhabited the area now known as Tajikistan since around 4000 BC, when different tribes, distinguished by language, settled the region. The various kingdoms were absorbed into the Persian Achaemenid Empire around the 5th or 6th century BC, which began a long process of Tajikistan being ruled by different empires and cultures. Alexander the Great next conquered the region and incorporated it into the Hellenistic Greco-Bactrian Kingdom. From the late 4th century BC until the early 2nd century BC, the land formed part of the Bactrian Empire. Arabs bought Islam to the area around the 5th century, only to be supplanted by the Saminid Empire. They established Tujik cultural centers in cities that are now in Uzbekistan before the region become part of the Emirate of Bukhara.

The Russian Empire spread across Central Asia in the 19th century, capturing Tajikistan between 1864 and 1885. The area between modern Kazakhstan, Afghanistan, and the Caspian Sea had a large Tajik population and became known as Russian Turkestan.

Central Asian guerillas fought a four-year war against Bolshevik control following the fall of Imperial Russia in 1917, during which time mosques and villages were destroyed and the people persecuted. Bolshevik religious persecution of Muslim, Jewish, and Christian Tajiks, including the systematic forced closure of religious institutions, continued after the war.

Tajik nationalists began calling for increased rights in the 1980s, resulting in Tajikistan declaring independence in 1991 after the collapse of the Soviet Union. Civil war, mainly between rival Muslim groups, erupted soon after independence. Many non-Muslims, Russians, and Jews left. Conflict continued until 1997, by which time 100,000 people had died and 1.2 million had become refugees.

Peaceful but controversial elections were held in 1999 when President Rahmon was re-elected by a 98 percent majority. Further elections in 2006 granted Rahmon another term with 79 percent of the vote. During 2010, there were several violent incidents between Islamic militant groups and Tajik soldiers. Further fighting erupted in 2012.

The Tajik identity and culture dates back several thousand years, and is very similar to that of Afghanistan and Iran in terms of language, beliefs, and habits. The vast majority of the population is Muslim, which had shaped the culture, particularly the art, food, music, and festivals. The Tajik people are family-oriented, sincere, and known for friendliness and hospitality. Decades of conflict have left deep scars on the national consciousness, although the mood in recent times has been cautiously optimistic. Tajiks tend to be conservative; gender roles remain very traditional and women do not generally wear shorts.

There remains a strong folk art tradition across the nation, particularly with the creation of textiles, embroidery, and other practical decorative arts such as carving, furniture, and jewelry making. The art tends to be based on nature. A little-known fact about Tajikistan is that the asymmetrical ‘Black Prince’s Ruby’ in the Imperial Crown of England originally came from here, as did the tulips for which Holland became famous.

lick here for Weather in Tajikistan