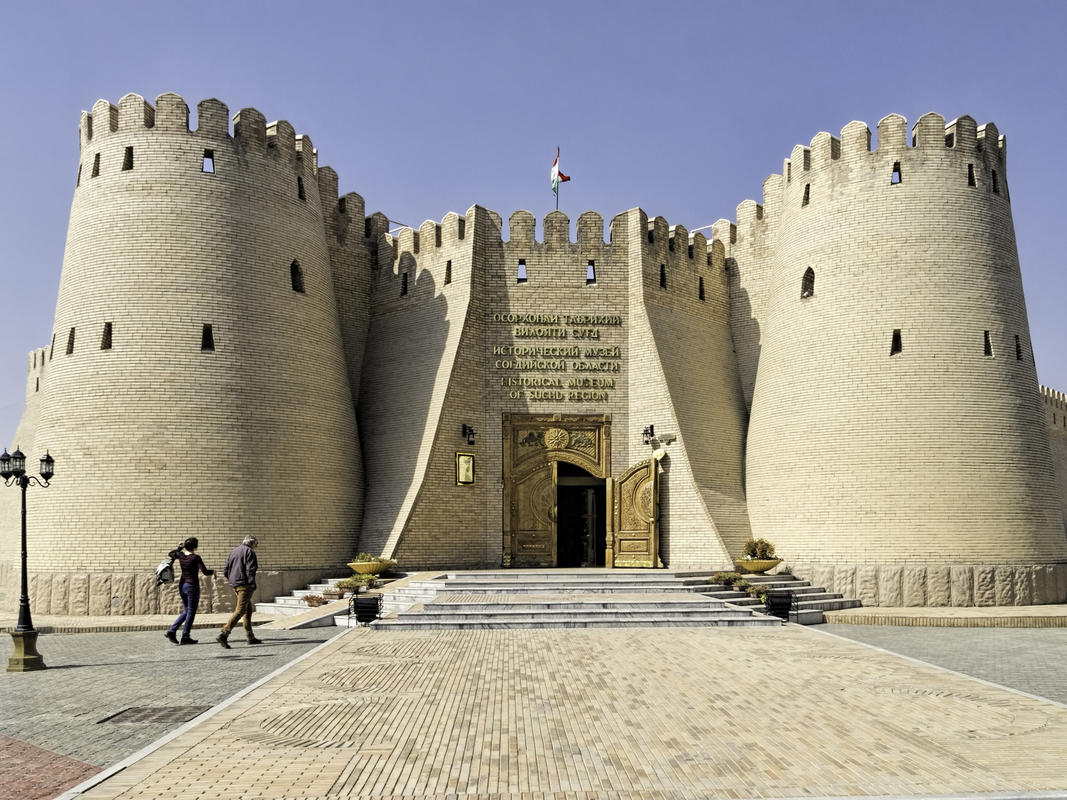 The fascinating natural landscape and colorful history of Tajikistan combine to produce unique and thought-provoking sightseeing for visitors. As much of Tajikistan is very remote and tourist infrastructure is still in its infancy, access to some of the more unusual sights of the nation is often best managed with the help of a local tour operator. Dushanbe city has the most easily-accessible sightseeing options, including the ancient sleeping Buddha at the Tajikistan National Museum, one of the most famous relics in the nation. Farther afield, old forts, mysterious salt caves, glaciers, and ancient stone carvings stimulate the imagination and transport visitors to another world.

This small but interesting National Museum provides an insight into Tajikistan history and culture. The main draw is the 1,500-year-old, 50ft reclining Buddha, which was discovered at the Buddhist monastery of Ajina Tepe in 1966. Other notable exhibits include an ivory statue of Alexander the Great, the skeleton of a Sarazm princess, a griffin shaped scabbard and hilt dating from the 6th century, and a Sogdian mural from pre-Islamic Penjikent. There are limited printed English captions in the museum, but an English speaking guide can provide more in-depth information. Address: 5, Academic Rajobov St, Dushanbe Phone: +992-37-227-1350 Website: www.afc.ryukoku.ac.jp/tj

The Gissar Valley, also known variously as Hisor or Hissar, is home to the picturesque Gissar fortress, once the home of the rulers of the Emir of Bukhara. The picturesque fort is shrouded in myth and linked to many legends. It sits on a hill, separated from the world by a great Islamic-style arched doorway, flanked by two round towers. The walls of the fort are three foot thick, with gun and cannon emplacements protecting the courtyards, gardens, pools, and buildings. Beside the fort are two ancient plane trees said to be more than 500-years-old. Opposite is a bazaar. Gissar fort is located about three miles out of Hissor city, which is just over 18 miles west of Dushanbe (on the M41). Admission is free. Address: Hissar city, Tajikistan Phone: NA Website: http://www.visittajikistan.tj/en/thingstodo/histor...

Ajina Tepe is a Buddhist monastery built on a hill east of Kurgan-Tyube during the 7th and 8th centuries. It was here that the big sleeping Buddha displayed at the Tajikistan National Museum of Antiquities was found. Excavation of the site began in 1961 and has so far revealed more than 1,500 artifacts, including sculptures, reliefs, and parts of wall paintings. Visitors to the monastery can see the remains of the two right-angled courts that made up the temple and monastery, with its sanctuary, monastic cells, stupas, sculptures, and petroglyphs. A joint Japanese and UNESCO World Heritage project is underway to preserve and protect the site. Address: Kurgan-Tyube, Eastern Tajikistan Phone: n/a Website: http://portal.unesco.org/culture/en/ev.php-URLID=27329&URLDO=DOTOPIC&URLSECTION=201.html

South Tajkistan is home to the fascinating Khodja-Mumin salt group, a huge domed mountain of different colored salts that, from a distance, looks like it is covered in snow. In spring, the mountain is carpeted in tulips and poppies. The strange landscape features salt pillars, spikes and 98ft mushroom-shaped salt formations capped with residual gypsum boulders. At 4,370ft above sea level, karst processes have created numerous moonlike craters on the massif (some of which are 650ft wide), as well as dissolving caves and underground cavities. The wondrous Khoja Mumin caves feature long, thin icicle-like stalactites that make beautiful chiming music when the wind blows through. The longest cave is the famous Dnepropetrovskaya, while the Salty Miracle cave has an underground river running through it. The cave walls are encrusted with salt crystals of many different colors. The best way to view this natural landscape it by joining a guided excursion with a registered tour operator. Address: Kulyab city, East Tajikistan Phone: N/A Website: http://centralasia-adventures.com/tajikistan/sight...mumincave.html

High in the mountains sits the village of Ishkashim, which provides access to Vibist-dara, four groups of ancient petroglyphs located at the end of a mountain gorge. The stone carved images depict chariots, horned mountain goats, and archers near the ruins of the ancient mining settlement of Bazar-dara. There are several other sites in Tajikistan with petroglyphs, including the burial ground of Shurali at Jalang (northwest of Murghab), and the circular burial grounds known as the Kurgans of Karaart (near the village of Karakul). Hunting scenes and images of musical instruments are reoccurring themes. Address: Ishkashim (20 miles south of Khorog), Tajikistan Phone: Website: http://www.advantour.com/tajikistan/travel.htm

Located on the banks of the Luchob River, the Dushanbe Zoo is home to some 600 animals. Unfortunately, the zoo, which was created in 1960, houses the animals in cages rather than habitats mimicking their natural environments. However, it is still a good place to see some of Tajikistan’s native animals, such as the Bactrian camel, brown and black bears, golden eagles, wolves, jackals, raccoons, and falcons. There are also animals from Asia and Africa, including lions, caymans, and a snow leopard. Address: Ismoili Somoni Avenue, Dushanbe Phone: Website:

Made up of 45 glaciers, the Fedchenko Glacier system is one of the wonders of Central Asia. Spanning 47 miles, this is one of the longest glaciers in the world, with an area of more than 16,000 acres. At its widest point, the glacier spans 3,280ft, and it is 3,300ft deep at its thickest point. The highest meteorological station of the former Soviet Union is located at 13,779ft above sea level at the mouth of Kashayak glacier. The glacier starts 20,300ft above sea level in the Pamir ranges and melts into the Balandkiik River near the Tajikistan-Kagikistan border, 9,544ft below sea level. The best way to access the spectacular glacier is by joining an organized expedition led by an expert mountaineer. Address: Pamir Mountains, Tajikistan Phone: NA Website: http://www.visittajikistan.tj/en/thingstodo/hiking...