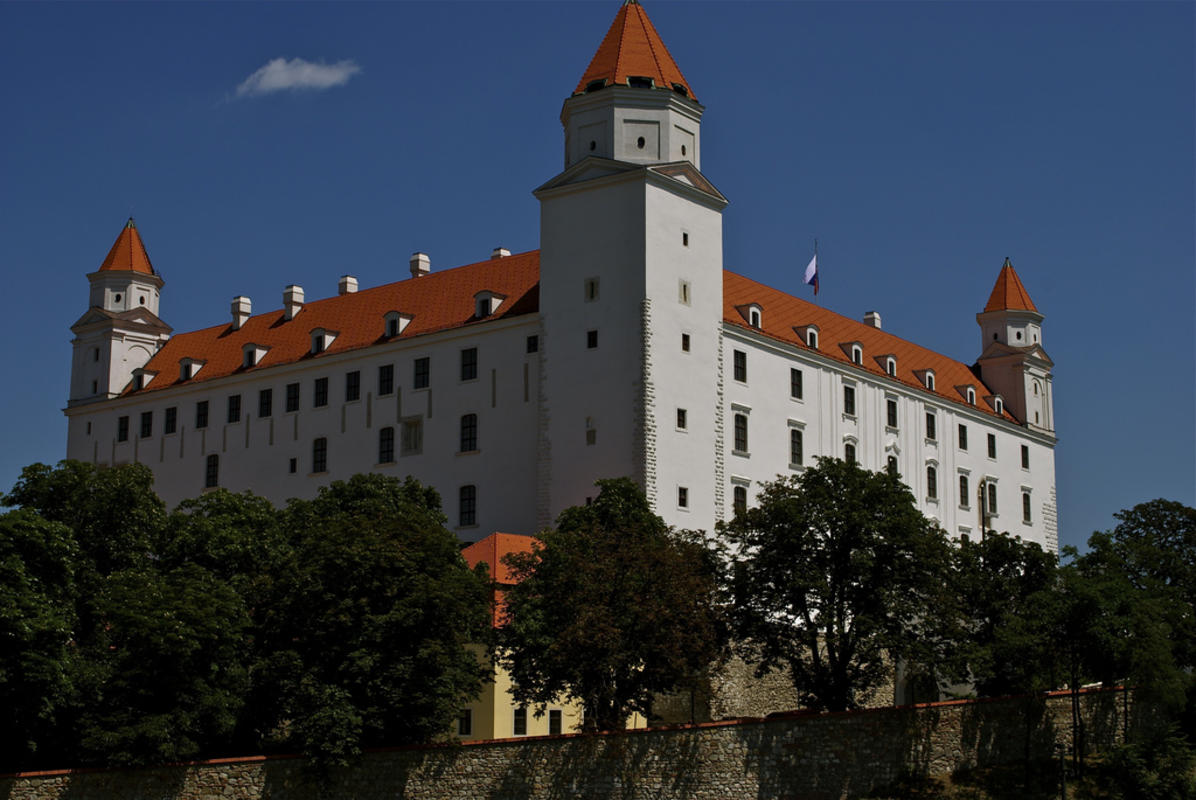 The Slovak Republic is a land loaded with unique wooden churches, some of Europe’s best preserved castles, thousands of caves, and relaxing thermal spas. Devin Castle is just one of eight different buildings scattered throughout the Slovak Republic’s capital which belong to the Bratislava City Museum, but the city’s better known namesake castle boats the best Bratislava views. However, no Slovak Republic castle stands higher than eastern Slovakia’s 650 foot high Spissky Hrad. A remote community called Medzilaborce is home to the Warhol Family Museum of Modern Art, dedicated to the famous American pop artist whose family moved from eastern Slovakia to the United States before he was born.

Views of Bratislava, Austria, and even Hungary await visitors who climb to the top of the capital’s namesake 16th century castle, which stood in ruins for nearly 150 years between the time it was burned to the ground in the 19th century and the beginning of a decades-long restoration during the 1950s. Four entrance gates guard the main castle building where a 262-foot deep well stands in the middle of the courtyard. The castle also houses a music hall within its former Baroque chapel, the National Council of the Slovak Republic, and the Slovak National Museum. Address: n/a Phone: n/a Website: n/a

The largest of the Slovak Republic’s countless medieval castles towers 650 feet high above the Spis region’s cliffs. This early 13th century castle, still among the biggest in central Europe, once belonged to royalty and ranked among Europe’s most significant Gothic castles. Although much of this national monument remains in ruins, visitors can easily imagine how it looked during its prime at the small museum which depicts its history. Address: Spissky Hrad, 05304 Spišské Podhradie Phone: +421 053 454 1336 Website: http://www.spisskyhrad.sk

Legendary American modern artist Andy Warhol never saw his ancestral home of Medzilaborce, which his parents left for the United States prior to his birth. However, Warhol’s fame has extended much longer than 15 minutes at his namesake museum, the main attraction at this eastern Slovakian community near the Polish border. The museum proudly displays some of Warhol’s most famous works, including two of his Campbell’s Soup paintings and his Vladimir Lenin portrait. Address: Andyho Warhola 749/26, Medzilaborce, Slovenská republika 068 01 Phone: +421 57 74 800 72 Website: http://www.andywarhol.sk/

No Slovak Republic national park has a longer history than this one, which encompasses Eastern Europe’s sole alpine mountain range, among the smallest on Earth. Bears and mountain goats frolic freely along the slopes of this winter skiing and summer hiking paradise. The lower slopes of the High Tatras are covered with pristine bodies of water and dense forests. Much of the High Tatras’ diverse landscape, plant life, and wildlife is exhibited at the on-site TANAP Museum. Address: Tatranský Národný Park, Tatranska Lomnica Phone: +421 52 446 7195 Website: http://www.tanap.sk/

This national park extending across the border to Poland may be the Slovak Republic’s smallest, but a large amount of beautiful landscape is included within its borders. The park’s main attractions are Červený Kláštor’s Museum of National Culture, the Dunajec River Gorge’s whitewater rafting, and its namesake Pieniny Mountains. More than 760 butterfly species fly above Pieniny National Park. Address: Pieninský Národný Park, Červený Kláštor Phone: +421 52 418 10 713 Website: n/a

The ancient Devin Castle, now one of eight Bratislava City Museum branches throughout the Slovak Republic’s capital, is perched nearly 700 feet above the meeting place of the Morava and Danube rivers. Humans have lived in, and fought over, this strategic trading site since Neolithic times. The oldest known Christian church north of the Danube was founded among the ruins of a Roman fort which stood in this spot before the current castle was established in the 8th century. During the Cold War, barbed wire and watchtowers surrounded this castle on the border between Austria and the country then known as Czechoslovakia. Several imprisoned maidens were said to have jumped to their deaths from the tiny Maiden Tower, the smallest of the castle’s towers. Address: Muránska ul., 841 10 Bratislava Phone: +421 2 65 73 01 05 Website: http://www.muzeum.sk/default.php?obj=hrad&ix=hd_mm...

The biggest of Bratislava’s many museums is actually a network of eight different buildings scattered throughout the Slovak Republic city. The Museum of the City History is the main museum, first established in 1868 and situated close to the main square of Bratislava’s historic Old Town Hall. The House of the Good Shepherd’s clock museum, the arms and city fortifications museum inside the Michael’s Gate tower, and the ancient Devin Castle are also part of the Bratislava City Museum. This museum network also contains museums dedicated to Johann Nepomuk Hummel, Arthur Fleischmann, and Janko Jesenský, as well as Rusovce’s Gerulata National Cultural Monument. Address: Organizace Múzeum Mesta Bratislavy, Radničná ul. č. 1, 81518 Bratislava Phone: +421 2 591 008 12 Website: http://www.muzeum.bratislava.sk/en/