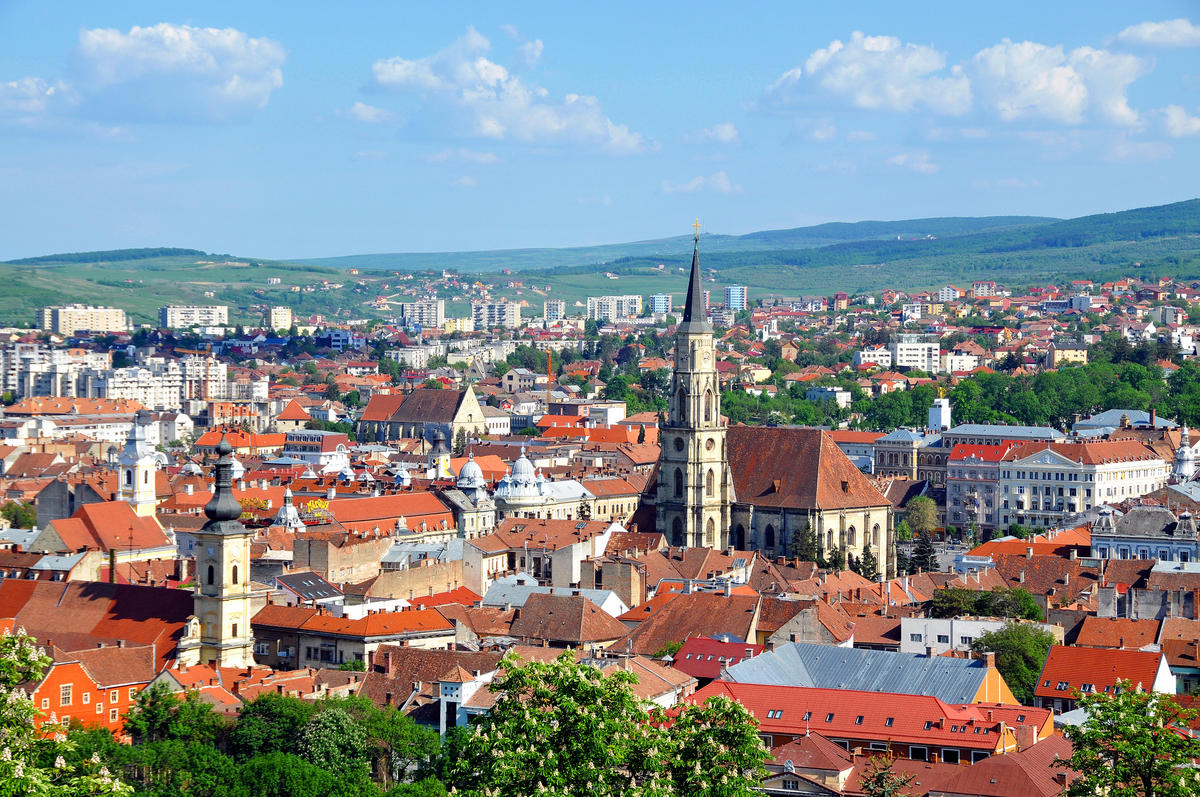 Romania may be a recent arrival on the tourist trial, but its innumerable and varied attractions are drawing more and more visitors. As yet, a huge swathe of the spectacular land is unspoiled, traditional and dotted with diverse and relatively unchanged reminders of its long history. A sightseeing journey through Romania opens up everything from the country’s often violent past to agricultural vistas unchanged for centuries, and its rich folk and cultural heritage is alive and well in its hinterlands.

This immense, impressive, monument to Romania’s Communist past is the world’s second–largest building and is still unfinished. Commissioned by Nicolae Ceausescu in 1984 during his megalomania period, it covers 3,552,090 square feet and has more than 3,000 marble-clad rooms spread over its 12 stories. A guided tour ends at the balcony intended as a platform for Ceausescu’s speeches. Unfortunately, the dictator didn’t live long enough to use it. Address: Bucharest, Romania Phone: +40-21-311-3611 Website: http://www.bucharest-life.com/palace-of-parliament

The exquisite Romanian Athenaeum is the heart of Bucharest’s high culture and the Romanian peoples’ love of classical music, Built in 1888, the structure and its breathtakingly ornate, gilded, interior was financed entirely by public contribution after investor funds dried up, and the ‘Give a Penny for the Athenaeum’ appeal is part of the city’s history. Mosaics, murals, frescos and elaborate gilded chandeliers are its architectural highlights and the George Enescu Philharmonic Orchestra is its cultural glory. Address: Piata Revoluteii, Bucharest Phone: +40 -21-315-6875 Website: http://www.bucharest-life.com/Romanian_Athenaeum

Museum of the Romanian Peasant

Voted Europe’s best museum in 1996, this fascinating celebration of the country’s rural history and heritage is a must for all visitors. Displayed here is an incredibly rich collection of Romanian folk art including 18,000 examples of pottery and 20,000 traditional costumes as well as farming implements, icons, peasant furniture and carpets. Vintage photographs tell life as it was, and complete wooden churches and a wooden peasant house form the heart of the amazing display. Address: Sos Kiseleff 3, Piata Victoriei, Bucharest Phone: +40-21-212-9661 Website: http://www.romaniatourism.com/bucharest.html

Set at the crown of a hill, the Metropolitan Church dates from the 16th century and is the center for the Romanian Orthodox faith. Its Byzantine interior is spectacular and contains a dazzling iconostasis, exquisitely-carved altars and magnificent gilding. Services here are presided over by the Patriarch of the Romanian church, whose Patriarchal Palace lies adjacent to the building. Address: Aleea Deulul Mitropoliei, Bucharest Phone: n/a Website: n/a

Set in beautiful Herastrau Park along the shores of a lake, this outdoor museum is perfect for a family visit. It’s the largest such in Europe, and holds 50 traditional rural buildings reassembled from all over Romania, documenting the design and history of the country’s rural architecture. Wooden churches, peasant homes, thatched barns, watermills and tiny log cabins give a glimpse of rural life, and displays of traditional skills are regularly held. Address: Sos.Kiseleff 28-30, Bucharest Phone: +40-21-317-9103 Website: n/a

The delta of the mighty River Danube is a UNESCO World Heritage site for its precious ecosystems and unique flora and fauna. The most important natural treasure in Romania, its wetlands, rivers, canals, lakes, marshes and reed islands all make this unique region a birders’ and eco-tourists’ paradise. The delta holds Europe’s largest concentration of bird colonies and is the breeding ground for species from Africa and even distant China. Over 3,000 animal species roam the wildernesses, including deer, wolves, bears, foxes and wildcats. Address: Black Sea coast, Romania Phone: n/a Website: http://www.romaniatourism.com/danube-delta.html

One of the most spectacular fortifications in this land of castles, Peles Castle lies in the foothills of the Bucegi Mountains in the charming small town of Sinaia. Built as a summer retreat for the Romanian Royal family, its 160 rooms are crammed with fine art, antique furniture and precious porcelains and lit by delicate Murano glass chandeliers. Many rooms are themed, with the Music Room’s carved teak furniture gifted by an Indian Maharaja and exquisite embroidered silks decorating the walls of the Turkish Salon. European and Oriental 15th to 19th century weapons and armor are found in the armory. Sinaia also holds a 17th century monastery and nearby Pelisor Castle is worth a visit for its unique collection of Lalique and Tiffany glassware. Address: Sinaia, Romania Phone: +40-24-431-0918 Website: www.peles.ro

Perched on a massive rock in Transylvania, Bran Castle’s soaring turrets and towers were the inspiration for Bram Stoker’s tale of vampires and mystery featuring the evil Count Dracula. The character was based on Prince Vlad Tepes, infamous as Vlad the Impaler, who, it seems, may never have visited the castle. Nevertheless, the imposing structure can’t shake off its link with vampires, and receives a huge number of visitors annually as a result. A royal residence in the early years of the 20th century, the castle and its timbered rooms are now a museum displaying antique armor, furniture and weapons dating from the 1300s to the 1800s Address: near Brasov, Transylvania Phone: +40-26-823-7700 Website: www.Bran-Castle.com

The village of Biertan is located just a few miles from the exquisite medieval town of Sighisora in Romania, and contains a famous 15th century fortified church set atop a hill in the village’s center. Now a UNESCO World Heritage site, the church boast 35 ft high defensive walls arranged in three tiers all connected by gates and towers. Its late Gothic design features double exterior walls and its interior holds a huge Transylvanian-style wooden altar and a carved wooden door with a unique locking mechanism protecting the treasures stored in the sacristy. Address: near Sighisora, Transylvania Phone: +40-26-980-6699 Website: www.Biertan.ro

The Painted Monasteries of Bucovina

Bucovina’s Painted Monasteries are amongst the most picturesque landmarks in Romania, with their exterior walls a mass of color depicting prophets, saints, the life of Jesus, angels and devils and heaven and hell. The frescoes date from the 15th and 16th and are now rated as masterpieces of Byzantine art. Their original purpose was to present Bible stories and the lives of the Orthodox saints to the illiterate villagers by means of vivid images. Of the numerous painted monasteries in the region, the best-preserved are at Mondovita, Probota, Patrauti, Suceava, Voronet and Sucevita. Address: Bocovina, Romania Phone: n/a Website: n/a

Set on a cliff in Wallachia, Poenari Castle was built in the 15th century by order of local ruler Vlad the Impaler, the inspiration for Bram Stoker’s Dracula character. One of Price Vlad’s main fortresses, its life as a fortress only lasted until the 16th century when it was abandoned and left to decay. The grim fortification dominated the cliff side until, in 1888, a landslide brought half its remaining structures crashing down the gorge and into the river far below. The eerie walls and towers still stand, and can be visited by climbing almost 1500 steep steps. Address: Central Romania Phone: n/a Website: http://www.draculascastle/poenari.html

Dacian Fortresses of the Orastie Mountains

The 2,000-year old remnants of the Dacian and Roman fortresses set between Orastie and Retezat are the oldest sites in Romania, and were set in a ring around the Dacian capital of Sarmizegtusa. Now a collective UNESCO World Heritage site, the ruins and those of the city itself are an archeological treasure chest. The six Dacian sites, conquered by the Romans in the second century AD, are remarkably well-preserved, and show an interesting fusion between defensive and religious styles. Sarmizegtusa has the remains of a Roman forum and amphitheatre. Address: Transylvania, Romania Phone: n/a Website: http://whc.unesco.org/en

Forming a massive semi-circular ring around Transylvania, the Carpathian Mountains are home to pristine forests, 400 unique mammal species, two-thirds of Europe’s brown bears and outstanding natural beauty. Home to several national parks, the Carpathians are noted by the World Wildlife Fund as Europe’s last, great, wilderness. A kingdom of carnivores, this is the last region on the continent supporting major populations of brown bears, lynx and wolves. Threatened bird species such as the Imperial eagle, the corncrake and the Ural owl live and breed in peace here. Address: Transylvania, Romania Phone: n/a Website: http://wwf.panda.org/carpathianmountains