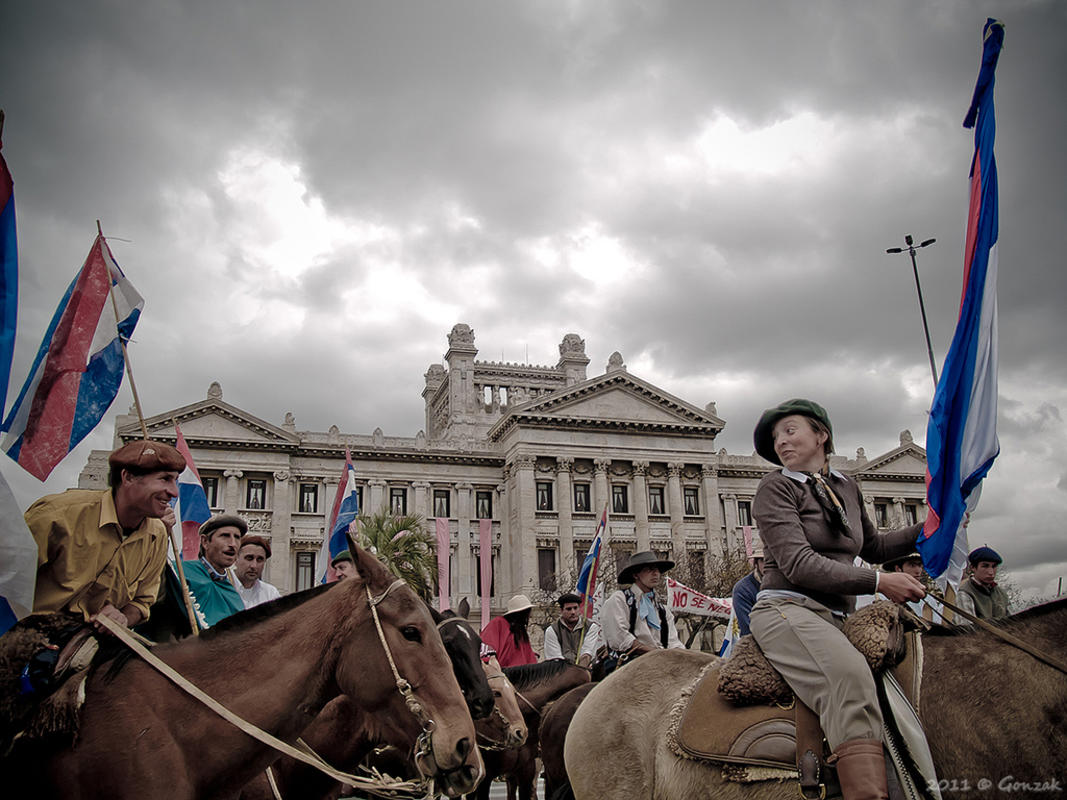 Due to Uruguay’s location on the east coast of the continent and proximity to the Rio de la Plata, the country was strongly contested by warring colonial forces and eventually fell under Spanish rule. Prior to colonization, Uruguay was inhabited by a small indigenous tribe, but nowadays the culture is primarily influenced by the European immigrants and neighboring Argentina and Brazil.

Although it remains unknown how long the territory was occupied prior to the arrival of Europeans, a small tribe known as the Charrua was believed to be modern-day Uruguay’s only inhabitants. Unlike its neighboring countries, Uruguay lacked natural resources, most notably gold and silver, thus delaying Spanish colonization until the turn of the 17th century. By this time, the Portuguese were attempting to expand their regional influence past Brazil and British forces continued to attack Spanish interests in the area, leading to the emergence of Montevideo as a significant port and harbor. As the century progressed, the Spanish managed to tentatively control Montevideo and modern-day Uruguay until cries for revolution broke out in 1811.

During the age of enlightenment and instability of the Spanish monarchy, many South American colonies embraced the ideas of republicanism, seeking independence from the Spanish crown, with Uruguay being no exception. Led by revolutionary Jose Gervasio Artigas, fondly referred to as the father of Uruguayan independence, local forces ousted the Spanish in 1811 and the Liga Federal (Federal League) was created. However, Brazil’s wary Portuguese government invaded the new state and eventually annexed it in 1821. Another seven years of fighting ensued, including the Cisplatine War, until the Treaty of Montevideo was drawn up in 1828, creating modern-day Uruguay.

Over the next decade, the country’s political scene became divided between conservative Partido Blancos (whites) and liberal Partido Colorados (reds) parties. Both were supported by factions in Argentina and, in the case of the Colorados, French backing led to the toppling of the Blancos president Manuel Oribe, a close ally of Argentinean leader Juan Manuel de Rosas. Civil war broke out and fighting continued for the next 13 years. In 1843, Argentinean forces on behalf of Oribe, invaded the country, but were unable to capture Montevideo.

Although the Argentinean army tried to avoid upsetting shipping routes on the River Plate, the blockade of Paraguay resulted in British and French, and later Brazilian, intervention in the conflict, which saw Rosas sign peace treaties with the nations and eventually remove Argentinean troops completely in 1852. Fighting between the two major parties simmered for the next decade, resulting in the ousting of the Blancos government by Colorado General Venancio Flores, who had acquired the support of both Argentina and Brazil. As a result, Paraguay, who was allied with the Blancos government, declared war on Uruguay.

The five-year conflict ended in victory for Flores and the Colorado forces, but success was short lived, with Flores and his rival Berro assassinated on the same day in 1868. While political tensions continued, by the turn of the 20th century relative stability was introduced to the nation, which started to experience an economic and social upturn.

In the run up to the 20th century, European immigration soared particularly from Italy, and the economy prospered due to the commercial success of Montevideo and the export and raising of livestock. Most of the reforms that benefited Uruguay were implemented during the two presidential terms of Jose Batlle y Ordonez. While Uruguay didn’t play a significant role in either of the two world wars, it did break diplomatic relations with Germany on both occasions and was one of the founding members of the United Nations in 1945. The country was subjected to economic woes throughout the 1950’s, spilling over into the 1960’s, during which time civil unrest was common and guerrilla movements, including the Tupamaros, formed.

A state of emergency was declared by the president Jorge Pacheco in 1968 and was followed by years of army-backed dictatorship. By the end of the autocratic rule in 1985, Uruguay had the largest number of political prisoners per capita anywhere. The Colorado party was once again ushered into power under the presidential rule of Julio Maria Sanguinetti. The reformist Colorado leader, who led the country from 1985 to 1990 and again from 1995 to 2000, oversaw economic growth and social improvements. While conditions in Uruguay continue to gradually improve as they emerged from the regional economic woes experienced in the early 2000s’, the country is still trying to combat widespread poverty and unemployment today.

Uruguayan culture is heavily influenced by European immigrants, mainly hailing from Spain, and later Italy, who settled the country in the 17th century. There also remains an element of African culture introduced by the slaves brought by the Europeans. Similar to Argentina, gaucho traditions are predominant in the music and art of Uruguay, while the country proudly boasts some of the world’s finest performers and composers of tango music.

Uruguayans, like most of their South American counterparts, are generally considered warm and hospitable people, and a common pastime is sitting around the many street stalls, sipping the national drink, mate, a South American infused tea.