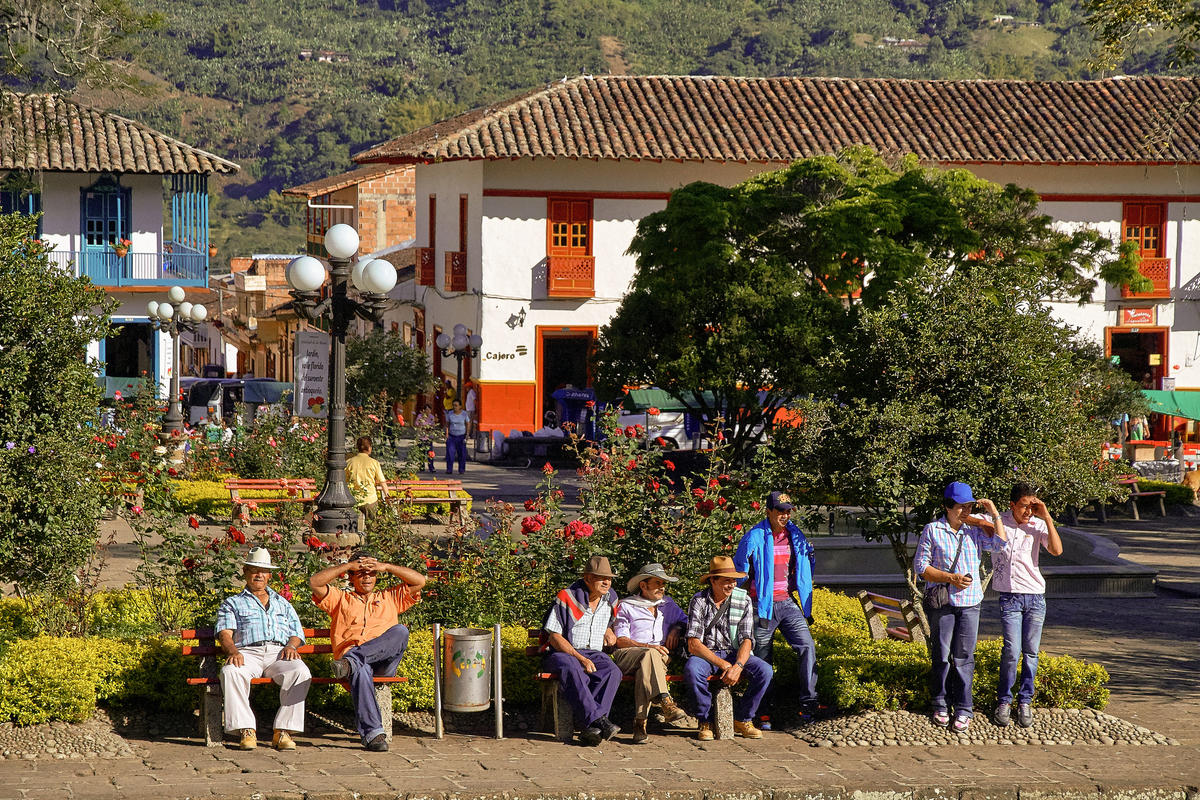 Colombia has had a turbulent history marked by slavery and appropriation of indigenous land during the Colonial period, and political instability, civil war and drug-related violence in recent years. Despite this, the largely homogenous culture is a rich artistic blend of Spanish customs, tribal heritage and Afro-Caribbean traditions.

About 12,000 years ago, Indigenous hunter-gatherer people including Muisca, Tairona and Quimbava inhabited what is now Colombia. By the first millennium, farming and a pyramidal power structure had developed.

The Spanish explored the region in 1500 and began colonization of Colombia soon after with Santa Marta founded in 1525, followed by Cartagena in 1533, the New City of Granada (soon renamed Santa Fe) in 1535, and Cali in 1536. European diseases such as smallpox reduced the indigenous Caribbean population when slaves were imported from Africa.

The Spanish rule lasted from about 1525 until 1808, during which time; the Royal Audience of Santa Fe de Bogota controlled the region of New Granada even though the Council of the Indies made most of the major decisions. Spanish farmers colonized the area and the remaining indigenous people were moved to specially designated reservations in Colombia. In 1713, the settlement of Palenque de San Basilio, established by escaped slaves in the 15th century, was granted legality through royal decree.

A viceroyalty of New Granada was created to control in 1717, removed temporarily, then re-established in 1739. During this time Santa Fé de Bogotá was the capital and became one of the main administrative centers for the New World, with a Colombian territory that also included some provinces of modern day Venezuela, Ecuador and Panama, and Peru.

There were several unsuccessful rebel movements throughout the Spanish period, but in 1811, Antonio Narino lead an opposition movement that led to the independence of Cartagena, ruled by two separate governments which would spawn a civil war. The United Provinces of New Granada were established in 1812, but ideological separation allowed Spain to recapture the territory and punish the perpetrators.

The retribution sparked further rebellion, resulting in independence for the region in 1819, although pro-Spanish resistance continued until 1822. The unstable Republic of Colombia, comprising what is now Ecuador, Colombia and Venezuela, was created with a constitution adopted in 1821 and Simon Boliva elected as the first president. Venezuela and Ecuador left the republic in 1829 and 1830, respectively.

The Liberal party of Colombia was formed in 1848, followed by the Conservatives in 1849, along with the first constitutional government in South America. A two-year civil war led to the establishment of the United States of Colombia in 1863, which lasted until 1886 when the Republic of Colombia was created. Dissatisfaction continued, resulting in frequent conflicts, including the Thousand Days’ civil war which continued from 1899 until 1902.

Panama became a separate nation in 1903 with assistance from the United States, but was not recognized by Colombia until 1921 after the US paid $25,000,000 in reparations.

Colombia became relatively stable after this, until tensions between the two parties erupted into violence following the April 1948 assassination of Jorge Eliécer Gaitán, the Liberal presidential candidate. National rioting ensued, killing approximately 180,000 locals. A coup to depose of the president and the subsequent military of General Gabriel Paris Gordillo saw a lessening in the violence between the two parties for a bit between 1953 and 1964. The two joined forces to create the National Front to run the country with a presidency alternating between conservatives and liberals every four years. This style of administration lasted for 16 years and had mixed success in implementing far-reaching social and economic reforms, which were hampered by interference from guerrilla groups.

The period from 1970 to 1990 saw the emergence of violent and powerful drug cartels, particularly the Medellin Cali which influenced the politics, economy and society in Colombia. At the center of this was Pablo Escobar who made a fortune in cocaine trafficking, to the extent of financing terrorist organizations to destabilize the country when the government threatened to sign an extradition treaty with the US. It culminated in the bombing of the Supreme Court, resulting in the death of several judges and the assassination of a major political leader. Escobar was eventually tracked down and killed, leaving behind warring factions, but the end of an era of violence that saw the murder of tens of thousands innocent victims.

In 1991, a new constitution was ratified which prohibited the extradition of Colombian nationals until the provision was repealed in 1996. Previously, the cartels had campaigned violently against extradition which further influenced Colombian politics. By 1996, about a third of the senate was under mafia control, a circumstance uncovered by the 8000 justice case.

Despite reforms, Colombia continues to be plagued by illegal factions and drug trade violence, which President Andre Pastrana attempted to reduce between 1999 and 2002. The administration of Alvaro Uribe, assisted by the United States, applied military pressure to illegal groups, which led to a gradual decrease in violence and growth in tourism, although the rural and jungle areas remain dangerous with reports of human rights violations.

Between 2008 and 2011, Colombia largely abandoned its long-held hostility towards Venezuela and gained a seat on the UN Security Council. In 2012, they became the fourth largest South American producer of oil, churning out around one million barrels a day.

Colombia’s turbulent history has created a racially tolerant, proud culture made up of people with Spanish, indigenous and African heritage. While Colombians are often happy to interact with foreigners, discussions or jokes about politics, religion or drugs are only appropriate amongst close friends. Large scale Catholicism of the nation took place under Spanish rule, incorporating tribal elements into the festivals. Carnivals are the best example of this, colorful celebrations of ethnic diversity and unity, incorporating time honored traditional dance, costume, instruments and cooking, usually in honor of a Catholic saint.

Colombians are also creative people who have been producing paintings, sculptures, and jewelry for centuries, with many contemporary artists globally recognized today. The Colombians also have a strong oral folklore, written literary and filmic traditions as evidenced by events such as the massive Bogota International Book Fair and film festivals hosted by Cartagena. No discussion of Colombian culture would be complete without a mention of the national love of football (soccer), which enjoys huge popularity in the country.