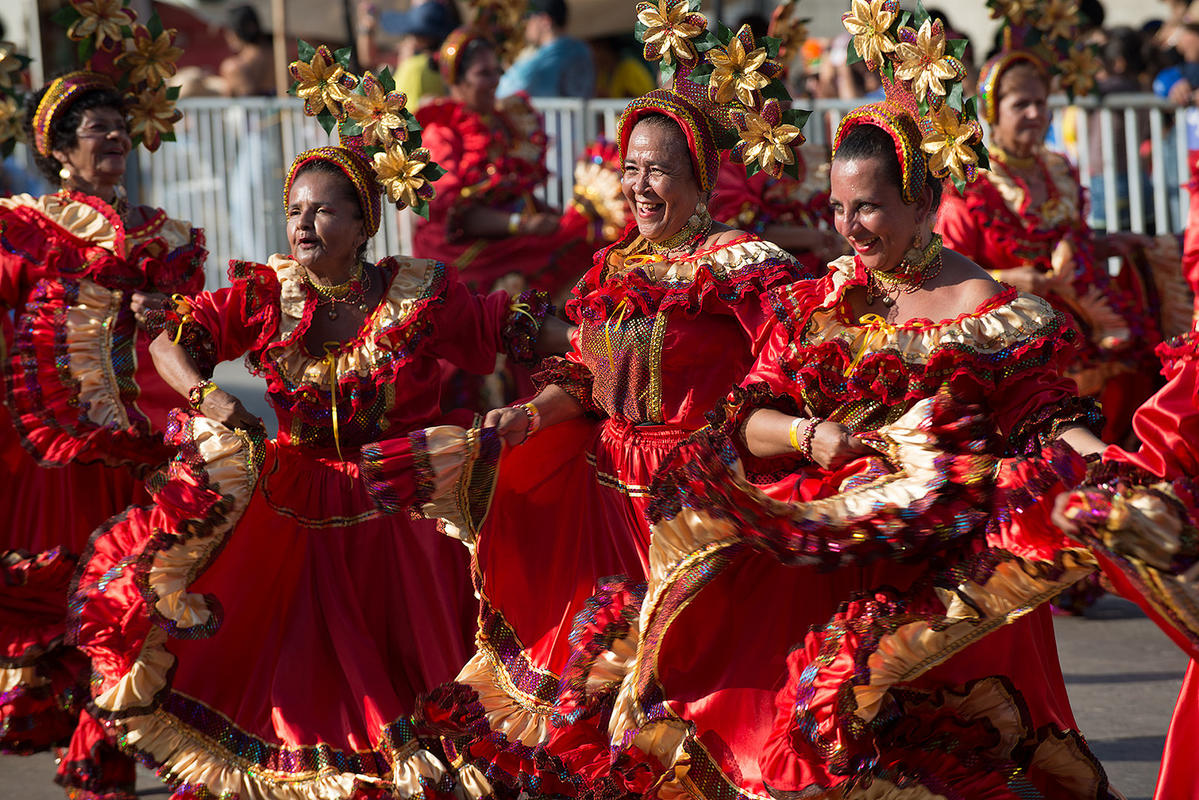 Colombia is the home of many colorful festivals and traditions taking place throughout the year, with many Colombia holidays largely dictated by the Catholic calendar. Carnivals are a major focus, with most cities and towns having at least one at some point in the year, that feature costumes, parades, music, food, wild parties, and dancing.

The town of Rio Sucio hosts the Carnaval del Diablo (Festival of the Devil) on odd numbered years biannually, in a party to ward off sadness. The event is a synthesis of indigenous pagan and Catholic beliefs and features feasts, costumes, dancing, music, and poetry under the spell of sugar cane liquor. Festivities end with the reading of the testament, a burning of the devil and the burying of the gourd.

The Carnaval de Negros y Blancos, or Festival of Blacks and Whites, is one of the major events in Southern Colombia, celebrated in Pasto over a week in early January. It has earned UNESCO designation for being a masterpiece in oral and intangible heritage of humanity. The first day of the celebration involves the Colonies Parade, a rock concert where farmers offer tributes of flowers and songs to the Virgin of Mercy in return for a good harvest. Day two is the Children’s Carnival followed by the Arrival of the Castaneda Family on the third, a colorful cartoon with all the stereotypes including a pregnant bride and a drunk priest. Day four and five are Blacks and Whites Day respectively followed by a Grand Parade on the fifth. The final day is devoted to Rural Culture and a Cuys Festival.

Carnaval is held in the port town of Barranquilla over the three days leading up to Lent, the Catholic fast. Participants dress up in exotic costumes and take part in a grand parade with a queen, floats, salsa music, rumba dancing, food, drink and partying.

Easter holy week takes place at the end of March/beginning of April each year and is the biggest festival of the year in Catholic Colombia. The city of Popaya is widely considered to be the religious center of the country and is home to an Easter procession that is regarded by many as the finest in South America. Groups of up to eight people carry large wooden platforms depicting scenes from the bible through the cobblestone streets in a parade that lasts many hours.

The Bogota International Book Fair is a two week event that has been taking place in in April or May since 1988. It is one of the world’s major literary festivals and is one of Latin America’s most significant cultural gatherings. Each year, a different country gets to be the principal character which turns Colombia into the biggest library on the planet, drawing writers, illustrators, publishers, editors, readers and book lovers from all over. Besides a massive trade fair for the publishing industry, the event features talks, workshops, concerts, exhibitions, food, drink and a children’s program. Colombia is, after all, the home of celebrated author Gabriel Garcia Marquez.

Festival of the Flowers

The city of Medellin has been hosting the Festival of the Flowers since 1957. Taking place over ten days in early August, there are concerts, parades, food and drink, an orchid exposition, and a competition amongst saddlemen bearing flowers on horseback. Common decorations include agapanthus, carnations, chrysanthemums, gladioli, lilies, orchids, roses, and sunflowers.

Day of the Candles

The Day of the Candles occurs on December 7 and marks the unofficial start of the Colombian Christmas season. At night, streets and homes are festooned with candles and paper lanterns, creating tunnels of light to honor the Catholic Immaculate Conception the following day. There are competitions for the best light displays and many towns hold concerts and fireworks shows.

The population of Colombia is a largely Catholic, so Christmas events, celebrating the birth of Jesus, are second only to Easter. Many of the devout participate in Novena, daily religious gatherings that start on December 16 with many churches offering morning and night masses, culminating with midnight mass on Christmas Eve, December 24. Novenas are often family events with prayers, bible readings, games, carols, and music. The celebrations begin at midnight on Christmas Eve with prayers, gift giving, feasts, fireworks and parties that last until dawn. Christmas Day is a public holiday, a quieter time for family gatherings.