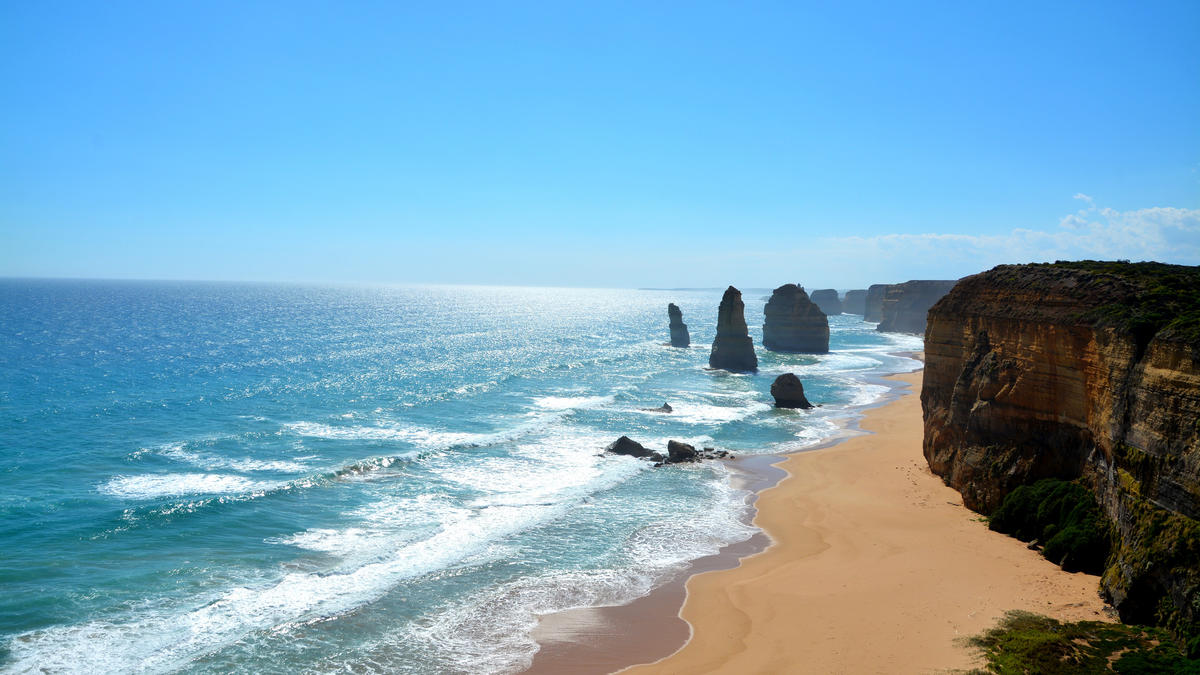 Victoria boasts plenty of different landscapes, making it one of the most diverse states on the Australian continent. From the rocky coast of the Great Ocean Road to the bustling streets of Melbourne’s inner city, Victoria provides enough stimulants to occupy even the fussiest of tourists. Natural attractions, man-made landmarks and historical highlights make Victoria an up-and-coming leader in Australia’s competitive tourism market.

One of Australia’s most illustrious natural sites, the southern coastline of Victoria is dotted with a series of limestone stacks called the 12 Apostles. They are found within the Port Campbell National Park, and can be accessed via the Great Ocean Road. Helicopter views are the best way to see the landmarks. However, those who can’t afford to fly by chopper can check out the Apostles via coastal lookout points. Address: Great Ocean Road, Port Campbell National Park, Victoria Phone: n/a Website: http://www.visit12apostles.com.au/

This important agricultural region of Victoria is found just outside the city of Melbourne. It is most famous for its wine growing capabilities, which sees many world-renowned estates and wineries go about their industry all year long. There are several towns in the region worth visiting too, including Yarra Glen, and Warburton. Numerous tour companies offer wine tasting packages. Springtime is the best part of the year to visit the valley, as the rolling hills and estates are flourishing with green and red. Address: Yarra Valley, Victoria Phone: n/a Website: n/a

Located next to the famous Royal Exhibition Building, Melbourne Museum is the largest museum in the Southern Hemisphere. It was first built in 1854, but has since experienced many important renovations and extensions. There are plenty of truly magnificent exhibitions on display, including the Children’s Gallery, Touring Hall and an IMAX theater. Recently nearly two million people flocked to the museum. This has made it one of Australia’s most visited attractions. Address: 11 Nicholson Street, Carlton, Victoria Phone: +61-3-8341-7777 Website: http://museumvictoria.com.au/melbournemuseum/

Even though inner-city zoos are quite popular, the Werribee Open Range Zoo is a fantastic African-themed site with stunning animal exhibits. Taking up a total of 560 acres, this open range zoo boasts globally famous animals like giraffes, zebras, rhinoceros and camels. It is only 20 miles from the center of Melbourne, so tourists will have plenty of transportation options available for them. Address: K Road, Werribee South, Victoria Phone: +61-3-9731-9600 Website: http://www.zoo.org.au/WerribeeOpenRangeZoo

The Melbourne Cricket Ground, which is commonly called the MCG or simply ‘the G’, is Australia’s largest stadium, and one of the largest stadiums in the world. Capable of holding 100,000 people, the MCG is the home of Australian cricket. It is the center of Melbourne’s Sports and Entertainment District, which is found to the southeast of the city center. Tours of the stadium are available daily, but most tours are closed when a sporting event is held. The MCG hosts an event almost every week, especially in the winter months, when two or three teams use the stadium as their home ground. Address: Brunton Avenue, East Melbourne, Victoria Phone: +61-3-9657-8888 Website: http://www.mcg.org.au/

Australia’s largest and most exciting casino experience sits in the heart of Melbourne, along the banks of the Yarra River. It boasts more than 500 table games, and over 2,500 slot machines which are commonly called ‘pokies’ in Australia. In addition to the casino, the Crown Casino complex also contains a variety of other important features, such as a small but up-scale shopping strip, hotel, restaurants and clubs. Address: 8 Whiteman Street, Southbank, Melbourne, Victoria Phone: +61-3-9292-8888 Website: http://www.crownmelbourne.com.au

This is one of Australia’s most important structures, and is commonly regarded as the symbol of Australia’s architectural history. The Royal Exhibition Building is found adjacent the Melbourne Museum, in the well-landscaped Carlton Gardens. It is still one of the only existing Exhibition Buildings in the world, and is currently under the preservation of UNESCO as a World Heritage site. Tours of the site are available through the Melbourne Museum. The building was first built to host the World Exposition Fair of 1880, making it one of the oldest standing structures upon the Australian continent today. Address: 9 Nicholson Street, Carlton, Victoria Phone: +61-3-8341-7777 Website: http://museumvictoria.com.au/reb/

Located in the capital of Victoria, Scienceworks is a magnificent attraction for both adults and children. It is operated by Museums Victoria, and showcases a large number of hands-on experiments, which is coupled with demonstrations and tours. One of the most important parts of the museum is its enormous lightning coil. School groups are usually found scurrying through the halls of the museum during the week, so visitors are advised to explore on the weekend or during the school holidays. Address: 2 Brooker Street, Spotswood, Melbourne, Victoria Phone: +61-3-9392-4800 Website: http://museumvictoria.com.au/scienceworks/