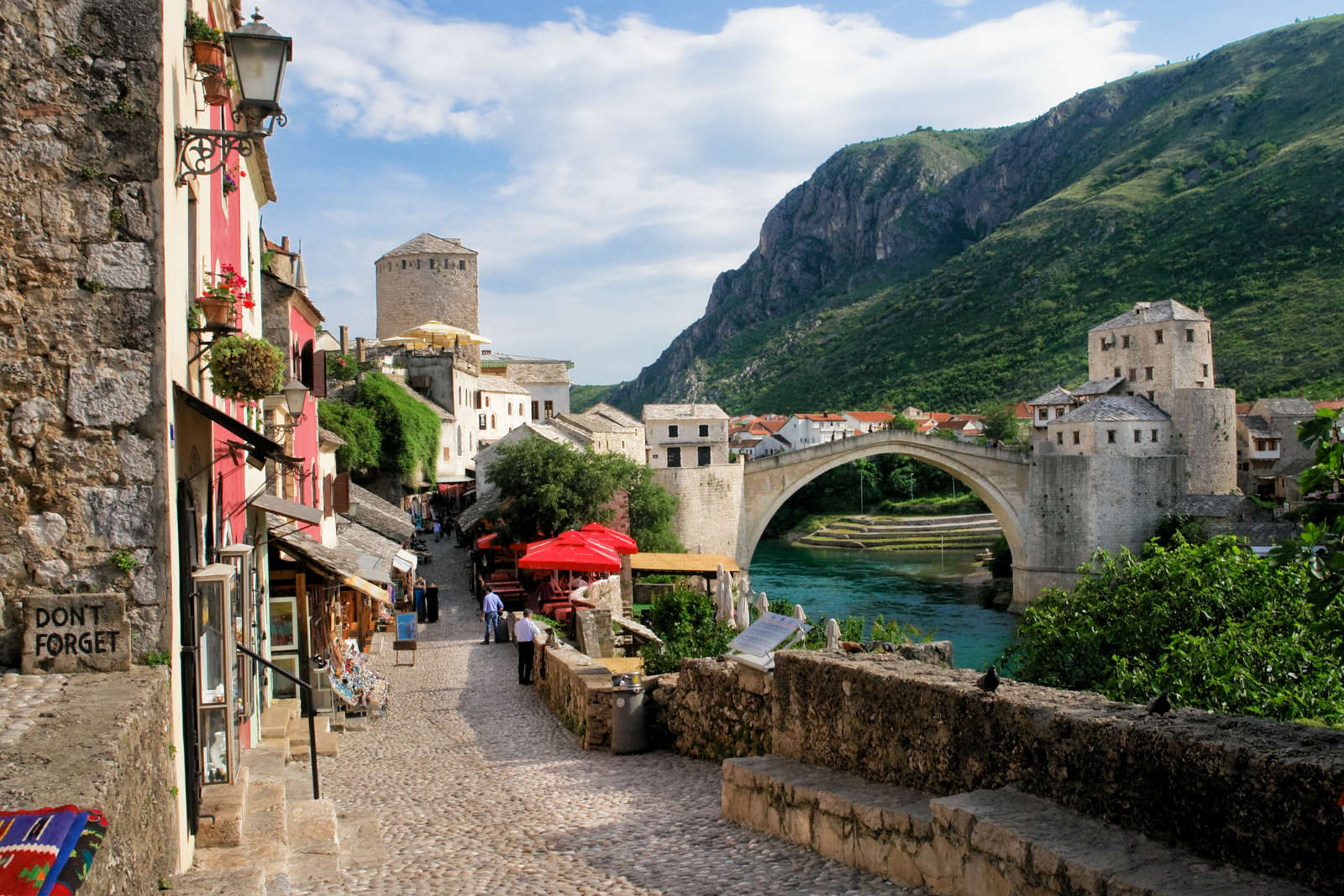 Often described as a crossroad of civilizations, Bosnia and Herzegovina is a mountainous playground that is quickly becoming a popular tourist destination. This long forgotten jewel of southern Europe is now third in the world in terms of tourism growth rate, and it is easy to see why. The stunning landscapes combined with historical and cultural heritage make it one of the most fascinating countries to visit in Europe. Curiosity attracts first-timers, but it is the never-ending natural wonders that lure travelers back again and again. The westernmost point of the East and easternmost point of the West, Bosnia and Herzegovina is a must-see, especially for active vacationers.

The great outdoors is often the central theme of tour packages to Bosnia and Herzegovina. Its architecture is also a major draw. In the capital of Sarajevo, you will find cobblestone streets lined by an intriguing mix of religious edifices and lively cafés. Away from the city are many other delights, such as the medieval town of Jajce, its citadel along and the Old Bridge of Mostar. Adventure-seekers will not run out of things to do in the unspoiled Sutjeska National Park.

Bosnia and Herzegovina is a real treat for hikers and cyclers. The country hosted the Winter Olympics in 1984, proof that its mountains have great potential for winter sports. Avid skiers flock to the slopes of the Bjelasnica and Igman Mountains. Water adventures are also popular, with majestic rivers criss-crossing scenic destinations throughout the country.

Having successfully emerged from wars and territorial disputes, Bosnia and Herzegovina is now a safe place to visit. Memories of unrest have been laid to bed in the history books, museums and monuments. The country’s Turkish heritage is still very much alive in the capital, evident in stunning Ottoman mosques and monasteries that stand side by side Catholic shrines, Orthodox churches, and temples, showing peace despite cultural diversity. Archaeological excavations throughout the country reveal tribal life that can be traced back 12,000 years.

Bosnians and Herzegovinians are welcoming and hospitable. In fact, it is not rare for complete strangers to invite guests for a cup of coffee in one of the trendy cafés of Sarajevo. The capital offers many choices of accommodation from basic apartments to luxurious five-star hotels that rival the best in the world. Outside the city, independent hotels, bed and breakfasts popular with couples, and motels are common. Backpackers can rest their feet at private houses marked zimmer or sobe, indicating they have rooms for rent.

It is possible to reach Bosnia and Herzegovina by plane, train, or even international bus, all of which converge in the capital. Sarajevo Airport in the Butmir suburb is the main gateway into the country, with flights to and from major European cities. Trains connect to Hungary, Serbia, and Croatia, but services are infrequent. International buses are a better option, with regular trips to and from neighboring countries. Ferry services connect to key cities on the Adriatic, while inter-city boats ply inland lakes and rivers. Trains are intermittent, even within the country, so it is advisable to take a bus or rent a car when getting between places.

Click here to learn about Things to Do in Bosnia & Herzegovina