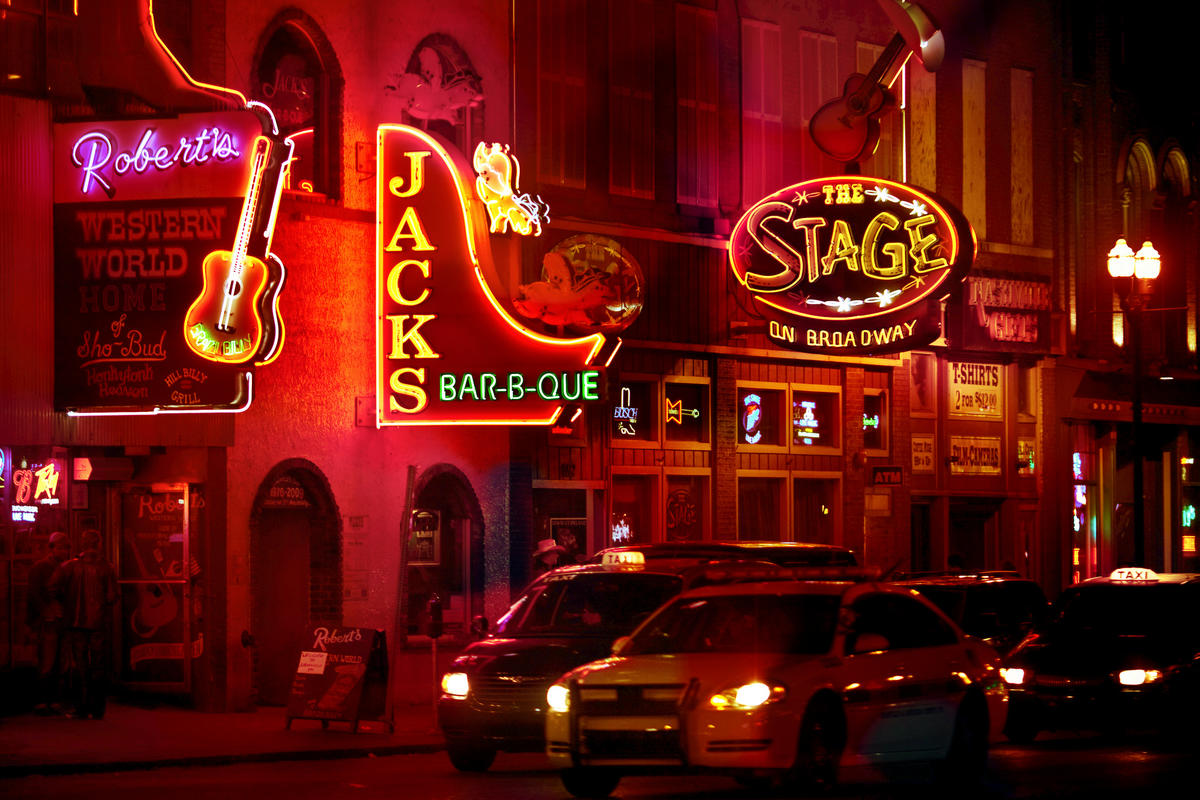 In this part of America, a lot of the food comes straight from farm to plate. Most of the restaurants in the state are casual down-home affairs where local favorites like barbecue, flaky biscuits, and country hams are taken to supreme levels. There are plenty of ethnic restaurants in the big cities, but Tennessee is best enjoyed on its own terms. That means big yummy platefuls of southern classics. Nightlife in the state is heavily centered around live music, as Nashville and Memphis are where wannabe stars come to get discovered. Prepare to be overwhelmed by the sheer quantity of the nightly music.

Bars and Pubbing in Tennessee

Nashville and Memphis handle the bulk of Tennessee’s nightlife, although Chattanooga and Louisville offer plenty of fun as well. Live music is the highlight of this state, with Nashville covering the country and western side and Memphis taking the blues and rock. You see buskers playing on most street corners in these two cities, but, in Nashville, the real action is found in Music Valley and the District. The District is definitely the livelier of the two, with historic bars and converted warehouses where The Bluebird Café (4104 Hillsboro Rd, Nashville) and Tootsie’s Orchid Lounge (422 Broadway, Nashville) have been holding court for decades. Music Valley is home to the legendary Grand Ole Opry (2804 Opryland Dr, Nashville) and the Texas Troubadour Theater (2416 Music Valley Dr, Nashville), where great live music is guaranteed.

Memphis holds its own in the live music department as well, and Beale Street is the epicenter of the sound. This legendary street is kind of like Bourbon Street in New Orleans, a nightly party that rolls from bar to bar along the street. It’s a bit chaotic but rarely dull. For a more authentic Memphis experience, get off of Beale Street and head to Wild Bill’s (1580 Vollintine Ave, Memphis) or the Hi-Tone Café (1913 Poplar Ave, Memphis), where you’re guaranteed amazing music without the tourist throngs. By law, the bars in Tennessee stop serving alcohol at 3:00a.m, and the doors shut soon after.

Dining and Cuisine in Tennessee

If you enjoy mouthwatering home-cooked southern food, then Tennessee will not disappoint. Nearly every town of note has a clutch of amazing local restaurants that have high standards to uphold. Tennessee’s larger cities take this food appreciation to the next level. In Memphis, the French-Creole cuisine at Restaurant Iris (2146 Monroe Ave, Memphis) warrants the awards it has won. But for local barbecue, try Corky’s Ribs & BBQ (5259 Poplar Ave, Memphis) and Rendezvous (52 S. 2nd Street, Memphis) for dry-rubbed ribs. Throw in some classic sides and you’ve got Tennessee cuisine at its finest.

Nashville is the state’s other star representative of New American cuisine and good old fashioned southern diner food. In the morning, it doesn’t get any better than the southern breakfasts at Loveless Café (8400 Tennessee 100, Nashville). The Southern soul food at Swett’s (2725 Clifton Ave, Nashville) has been wooing folks for decades, but for a taste of the new direction in Southern cuisine, check out the Capitol Grille (231 Sixth Ave N. Nashville). Tourist towns like Pigeon Forge offer loads of dining options, but most are predictable chain-style restaurants. Bennett’s Pit Bar-B-Que (2910 Parkway, Pigeon Forge) is an exception to the rule.