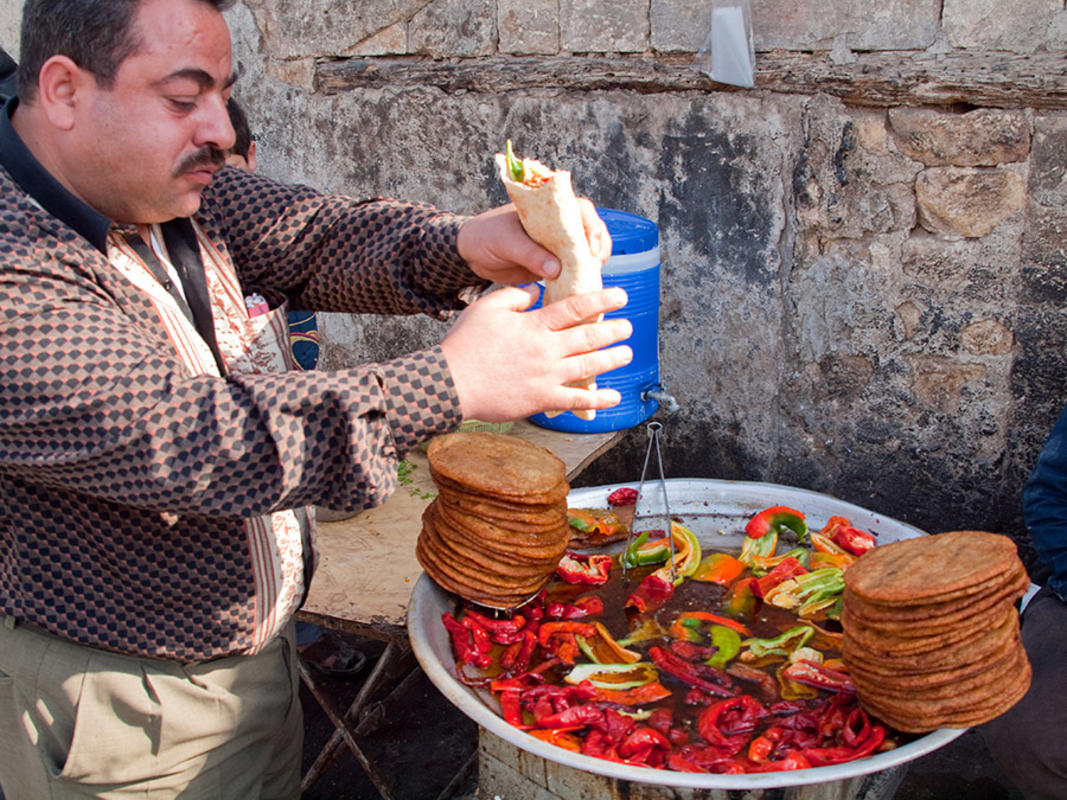 Many local establishments, both in and out of large cities, serve great local food at reasonable prices. There are many international options, however, especially in the bigger hotels, for travelers who prefer a bit more variety. The bar scene in Syria is pretty much centralized in Damascus but here there are plenty of options. Whether travelers are looking for a quiet night out or a taste of local beats, there is something for everyone.

Syria’s nightlife is largely located in the capital city, Damascus. While some may argue that nightlife here is tamer than in other regional centers, there are several opportunities to have a good time after dark. British travelers will be particularly pleased with the number of pubs on offer, usually located in or near the offices of foreign missions in the country. Most of the larger nightclubs are situated in upmarket hotels

While many night time establishments in Syria are not particularly female-friendly Galeri Adbal (Sharia Shaweesh, Old City, Central Damascus) certainly is. A trendy spot located in a trendy area, this establishment is great for knocking back a few drinks and interacting with new people. The space hosts regular art exhibitions as well and is popular with local artists and students in Damascus.

Great for cocktails and perhaps a bit of intellectual conversation before dinner XO Bar (Four Season Hotel, Central Damascus) is a swanky, gentleman’s club style bar popular with local journalists and businessmen in the city. The atmosphere is relaxed but sophisticated and the barkeeper makes some mean drinks.

If travelers are yearning for the sounds of traditional Syrian music, they should look no further than Takaya (Sharia Qasarath-Thaqefeh, Old City, Central Damascus). From around 9pm every night, the resident musician strums out traditional Oriental rhythms and classic Syrian songs. The décor matches the music perfectly boasting Oriental designs and comfy, lounge-worthy sofas.

For a bit of fun head to Abu Nawas in Homs (Sharia Ragheb al-Jamali Train Station Area Safir Hotel, Homs) which is a 1970s themed retro bar. Pumping out all the greats from Abba to the Bee Gees, this lively bar will get everyone off the couch and onto their feet. Not many people know about this little place either which means crowds are kept to a minimum.

Syrian cuisine is an exciting mix of Mediterranean and regional Middle Eastern influences. There are several local restaurants, both upmarket and more rustic, at which travelers can sample the national fare. For those wanting more variety there are also a host of international options on offer, especially in the larger city centers. Tipping, in both large and small establishments is expected and is usually about 10 percent of the bill total.

Labeled the best restaurant in Damascus, Al-Hallabi (Damascus Four Seasons Hotel, Central Damascus) serves up authentic local cuisine in the chicest of settings. Put together by the world renowned Chef Mohammed, the dishes at this fine establishment are popular with Syrians and travelers alike. As if the meals weren’t good enough, the restaurant boasts a stellar wine list as well.

Another great Syrian option, Aldar Restaurant (Old City, Central Damascus) in the capital is famous for its skillful fusion of old and new. This classy establishment takes some of the country’s most well-loved dishes like borek and sojok and adds modern international twists to them. On Tuesday nights the restaurant also hosts live jazz evenings.

Offering a range of cuisines including French, Syrian and Aleppan, Beit Sissi (Sharia as-Sissi, New City, Aleppo) is one of the most famous restaurants in Aleppo. Travelers should definitely make bookings as the restaurant becomes quite packed, especially on the weekends when Aleppo’s finest are out in full force.

For a quick snack and perhaps even a coffee why not head to Café and More in Latakia (Sharia al-Mutanabi, City Center, Latakia). Here, travelers will find the strongest coffee and the most delicious pastries and cakes. There are, however, also many savory options for those with an aversion to too much sweetness.