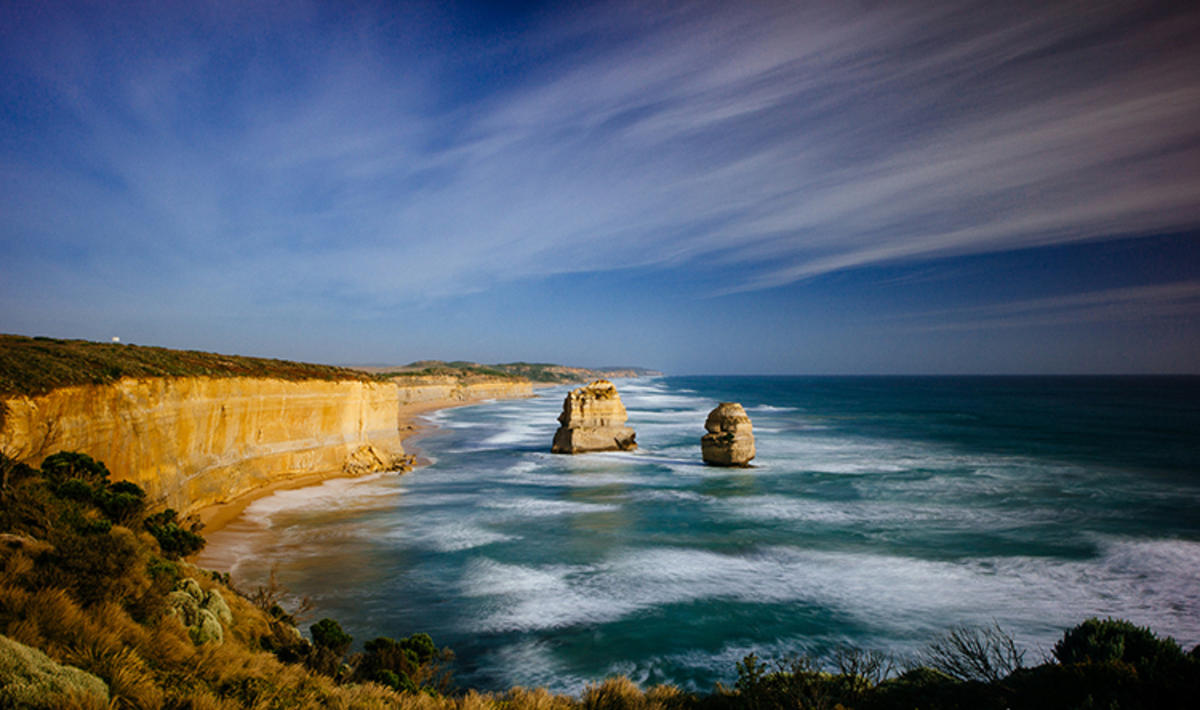 Australia is such a large, plentiful country with various landscapes begging to discover. When it comes to attractions, no other country in the world boasts such a rich menu of things to see. Australia is an solitary nation, and with this isolation comes many unique landmarks. Getting from point A to point B is usually best achieved via aircraft, as the sheer size of Australia can be quite daunting. Nevertheless, the country’s diversity means some sites are best accessed by van, four-wheel drive, bus, train, boat, or by foot.

Located just north of Brisbane, at the southern gateway to the Great Barrier Reef, Fraser Island National Park is a must see attraction for everyone. Filled with magnificent natural elements like the crystal blue Lake McKenzie and Kingfisher Bay, Fraser Island has become the second most visited landmark in Queensland, behind the Great Barrier Reef. It is a UNESCO World Heritage site as the world’s largest sand island. It is possible to stay on the island, as Kingfisher Bay contains a resort. In addition, camping facilities are available across the area, but be wary of native wild dogs, known as dingoes, who serve as the primary residents. Although dangerous to touch, these dogs will not disturb tourists. Address: Queensland, Australia Phone: +61-7-4191-2600 Website: http://www.derm.qld.gov.au/parks/fraser/index.html

When it comes to a family day out, the Sydney Aquarium can hardly be beat. Opened during the bicentenary year of Australia’s settlement, the aquarium boasts 525 feet (160 meters) of underwater tunnels where Australian marine wildlife swim above. River and oceanic zones are on display within the aquarium and home to famous Australian wildlife, including platypus, dugong, saltwater and fresh water crocodiles, and penguins. In addition, the largest collection of sharks in captivity is located inside the aquarium. This attraction is found within Darling Harbour, and can be reached from most inner-Sydney hotels on foot, by monorail, or even by harbor ferry. Address: Darling Harbour, 1-5 Wheat Road, Sydney, NSW Australia 2000 Phone: +61-2-8251-7800 Website: http://www.sydneyaquarium.com.au

No other building in Australia radiates a fascinating heritage like Melbourne’s Exhibition Building. This UNESCO world heritage site was erected in 1880 to host the International Exhibition of 1880 to 1881. Even though parts of the building have been demolished through fire or old age, much of the Main Hall remains totally intact. The Exhibition Building can be toured through the Melbourne Museum, which is located next door. Built using a mix of classic European influences, the landmark is regarded as one of the world’s most spectacular exhibition buildings. Address: 9 Nicholson Street, Carlton, Melbourne Victoria 3053 Phone: +61-3-8341-7777 Website: http://museumvictoria.com.au/reb/

The pride and joy of Australia’s natural landmarks lay in the remote center of the country. Uluru, formerly known as Ayers Rock, stands 1142 feet (348 meters) tall and takes up a massive area providing quite the challenge to adventurous climbers. About 19 miles (30kms) from Uluru stands Kata-Tjuta, also known as Mount Olga for two centuries. Plenty of indigenous art can be found along the rock walls of both sites, some of which is more than 40,000 years old. Visitors can fly from most major cities into Connellan Airport, but vans or buses are the easiest form of transportation into the national park. The closest accommodation is available at Yulara. Address: Lasseter Highway, Yulara, Northern Territory, Australia 0872 Phone: +61-8-8956-1100 Website: http://www.environment.gov.au/parks/uluru/

Thought by many to be the most astonishing piece of architecture in the world, the Sydney Opera House cannot be overlooked when holidaying in Sydney. Tours of the interior are available, however, just viewing the Expressionist design from outside will be enough to satisfy most. The site still regularly hosts performances from ballet to opera to orchestra, catering to more than one million patrons annually. A concert hall, dramatic theater, opera theater, playhouse, and forecourt are the primary features of the building. The site is within walking distance from Circular Quay, which is the main ferry and train port for Sydney Harbour. Address: 2 Macquarie Street, Sydney, NSW Australia 2000 Phone: +61-2-9250-7111 Website: http://www.sydneyoperahouse.com/

Click here to learn about Australia's Food and Restaurants