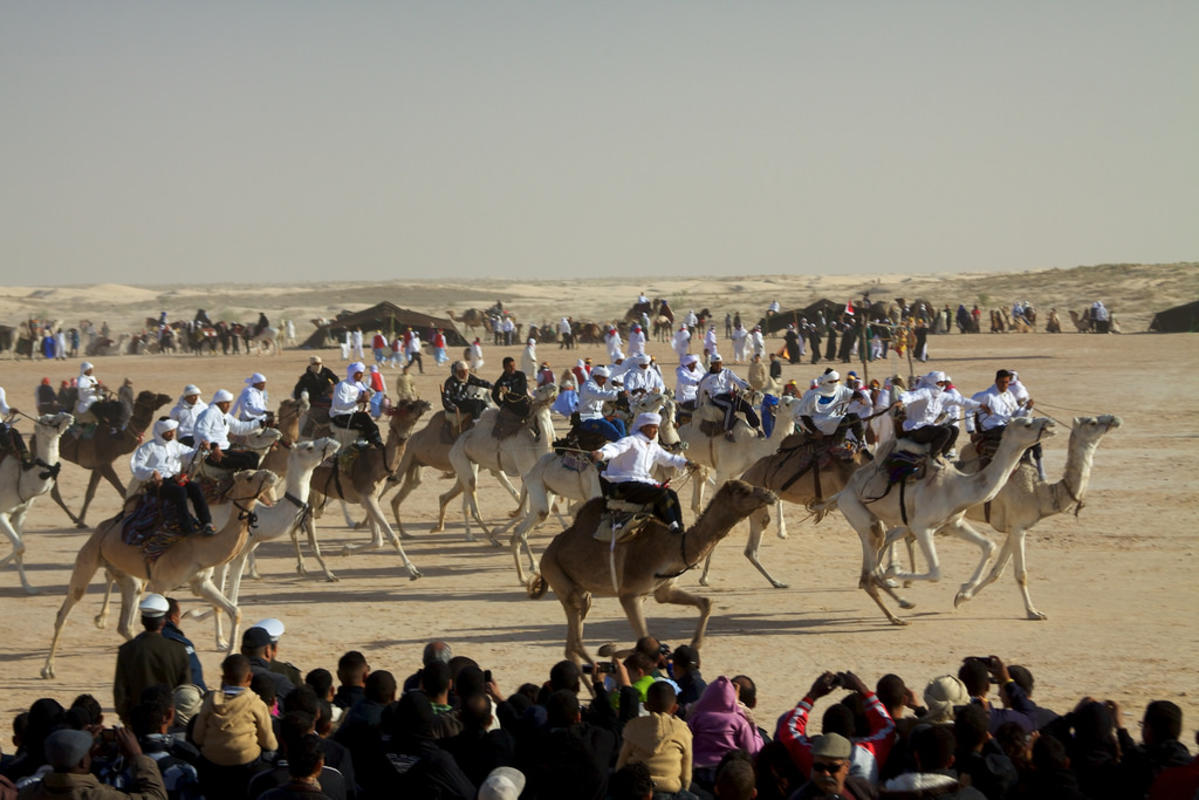 Most of the Tunisia holidays and festivals take place in summer, and most are focused on music, crafts, or other aspects of Tunisian culture. The Tunisian Medina Festival livens up the holy month of Ramadan in the Tunisian capital each year, while Carthage and Hammamet each host their own international festivals, filled with music, dance, and creative arts. Tunisia closes each year with its oldest festival of all, the International Festival of the Sahara, a tribute to southern Tunisia’s traditional Sahara Desert culture.

The municipal theater in the heart of Tunis is the main venue of this festival, which is held in the Tunisian capital during the Muslim holy month of Ramadan, which can fall at any time of the year. In addition to the usual array of religious ceremonies that normally take place in Muslim cities during Ramadan, this festival also features international films and musical performances. Street shows and people dressed in medieval costumes spill out across the city.

Festival of the Oases of Mountain in Tamerza

Festival of the Purebred Arabian Horse of Maknassy

No known breed of horse has a longer history than the 5,000-year-old Arabian horses that are showcased during this June festival. The ancestors of today’s Arabian horses carried conquering armies across ancient Mesopotamia. An Arabian horse racing display is the main event of this festival’s first day, while the next two days are dedicated to an international Arabian horse show. Africa’s largest horse show also includes a craft fair featuring artisans from across Tunisia.

At no other time of year does the always-popular city of Carthage welcome more visitors than during this annual festival. Held in Carthage’s Ancient Roman 7,500-seat amphitheater, the festival starts in the middle of July and continues into August. The first International Festival of Carthage was held in 1964, but the event has since grown into one of Northern Africa’s largest entertainment festivals. James Brown, Louis Armstrong, and Ray Charles are just a handful of the legendary musicians who have performed here.

Like its sister festival in Carthage, Hammamet’s annual international festival is a celebration of music, dance, and other performing arts. For more than a month between July and August, this picturesque coastal community on northeast Tunisia hosts dozens of jazz and other musicians from around the globe. However, this is not longer just a music festival; visitors now also have roughly a dozen French theatrical plays to choose from.

This festival on Tunisia’s ‘island of lotus eaters’ starts in July, lasts until August, and attracts visitors from across the country and the world. Djerba’s Houmt Souk is filled with performances by local actors, musicians, and visual artists. One day of the festival is dedicated entirely to children’s entertainment, another day is dedicated to sports, and a third focuses on arts and crafts made by women. The 10-day Guellala Pottery Festival also occurs during this period.

Performers from 10 different countries take part in southern Tunisia’s largest cultural festival. Apart from a brief period during WWII, this festival has taken place every year in one form or another since 1938, and became international in 1991. Parades, poetry recitations, film screenings, and horseback riding and racing along southern Tunisia’s oasis are among the highlights of this festival, which starts in late November and extends into December.

International Festival of the Sahara

Each December, Tunisia ends each year with its oldest and most famous festival. This Douz festival was originally named the Camel Festival when it was held for the first time in 1910. It has since grown into a four-day tribute to southern Tunisia’s nomadic cultures and traditions. Douz’s H’naiech Stadium hosts most of the main events, including camel marathons, Arabian horse racing, and traditional Bedouin wedding ceremonies. However, the most popular event of all may be the poetry contest, which is sponsored by Abdellatif Belgacem, a famous desert poet.