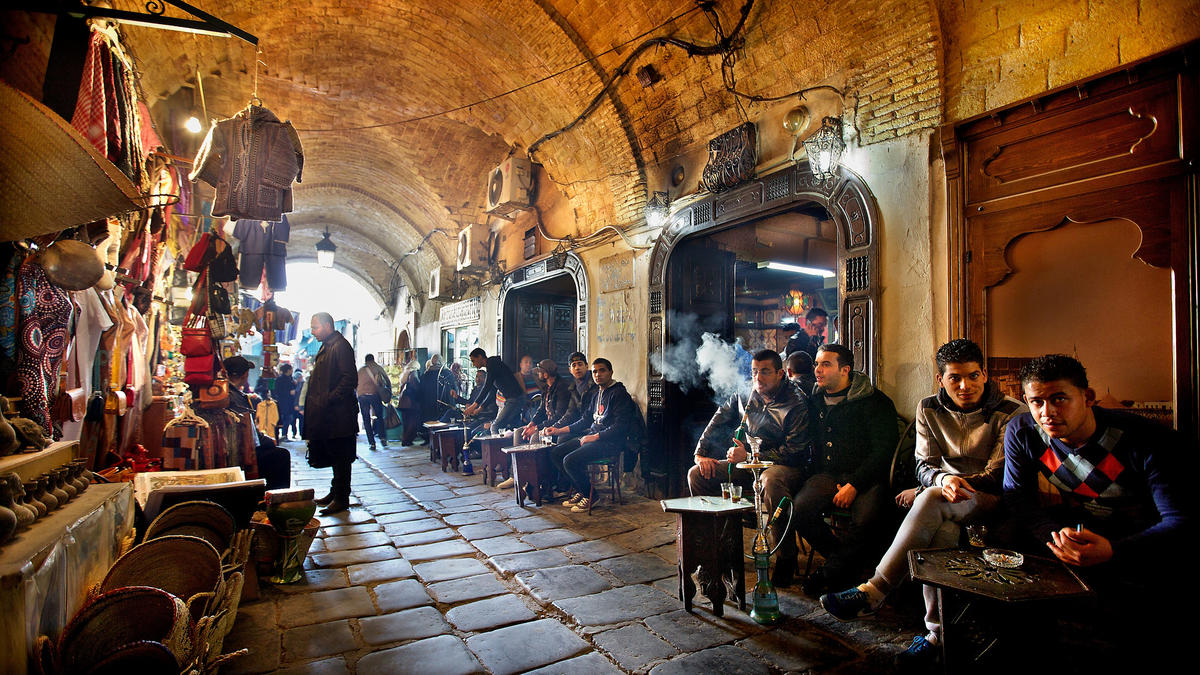 The ancient Roman city-state of Carthage is merely the most famous of the hundreds of remarkably well-preserved Roman landmarks scattered throughout Tunisia. Lesser-known, but no less impressive, are the several underground buildings that still stand from the times of the ancient Roman city of Bulla Regia. Tunisia’s present-day capital, Tunis, hosts a fascinating mix of centuries-old Arabic walled medinas and 19th century French colonial architecture. Star Wars fans will not want to miss seeing the film’s opening scenery for themselves in the village of Matmata, where the fictional home of Luke Skywalker’s aunt and uncle still stands. The country’s eight national parks cover more than 875 miles of Mediterranean Sea coastline, serene forested mountains, and the sprawling Sahara Desert.

No visit to Tunisia’s national capital would be complete without exploring the city’s old quarter, better known as Al-Madinah. Although this walled medina was first constructed in the 7th century AD, the golden era, when Tunis was one of the Islamic world’s most prosperous and powerful cities, lasted between the 12th and 16th centuries. Visitors will see remnants of all of these eras while meandering through Al-Madinah’s winding and narrow streets, where vendors sell much of the same exotic foods and handmade merchandise as their predecessors, centuries before. Address: Tunis, Tunesia Phone: n/a Website: n/a

Byrsa Hill boasts the best view of the many Roman ruins that survive in Carthage. No Ancient Roman bathhouses outside of Rome were larger than Carthage’s thermal Antoine Baths, and few Ancient Roman amphitheaters can rival the size of the one in Carthage. Many more unearthed Carthage ruins can be viewed at Byrsa Hill’s Carthage Museum. Today, Carthage is a wealthy Tunis suburb containing the Tunisian presidential palace and the Dar El Hout Oceanographic Museum. Address: Carthage, Tunisia Phone: +216-71-730-036 Website: http://www.commune-carthage.gov.tn/

The splendid 13th century Hafsid palace, containing Tunisia’s largest museum, is nearly as impressive as the museum’s exhibits, which are divided into different eras of Tunisian history. Ornate ceilings rise above the ancient Roman mosaics, which are displayed alongside Ancient Greek and medieval-era artifacts. Saturday crowds are much larger than those on weekdays, but the surrounding stone gardens are ideal for those to relax outside. Address: Le Bardo, Tunis 2000, Tunisia Phone: +216-1-513-650 Website: n/a

Each year, thousands of birds fly south from Europe to spend their winters near north central Tunisia’s shallow Ichkeul Lake, the centerpiece of the coastal national park. The limestone Jebel Ichkeul Mountain at the lake’s southern edge was once a 13th century hunting park where royalty attempted to capture wild boar and other smaller species. In 1729, the Sicilian king gave the Bey of Tunis a pair of water buffalo, which are believed to be the direct ancestors of every water buffalo that roams Jebel Ichkeul today. Address: North Central Tunisia Phone: n/a Website: n/a

This southern Tunisia national park, the country’s largest, is situated in the heart of the Sahara Desert, less than 50 miles south of Douz. Shelters and guards protect visitors from the cobras and gazelles that roam around the desert vegetation of this Grand Erg Oriental national park. The gigantic boulders in the park’s west end were created by the erosion of plutonic rocks, while artifacts unearthed from the park date between the Holocene era and WWII. Address: Southern Tunisia Phone: n/a Website: n/a

Although this ancient Roman city is not quite as well-known as Carthage, it is well worth the trek to northwest Tunisia to see. Bulla Regia is among the few Ancient Roman sites where visitors can see complete Roman rooms, such as the mosaic-filled House of Amphitrite, the House of the Fishing Scene, and House of the Hunt. Many Bulla Regia buildings were built underground to keep people cool beneath Tunisia’s hot sun. Two 6th century Christian basilicas with marble columns, the Forum and the Julia Memmia baths, are among Bulla Regia’s other impressive buildings. Address: Northwest Tunisia Phone: n/a Website: n/a

The entire family can swim and play with the dolphins at this animal park, which more than 410 animals call home. Giraffes, cheetahs, and meerkats are among the other 61 animal species housed in this park’s large enclosures. Visitors can also enjoy traditional Tunisian food, music, and dancing at the park’s Shaka Restaurant. Address: Route de Sousse, Hammamet Phone: +216-73-252-723 Website: http://www.friguiapark.com/