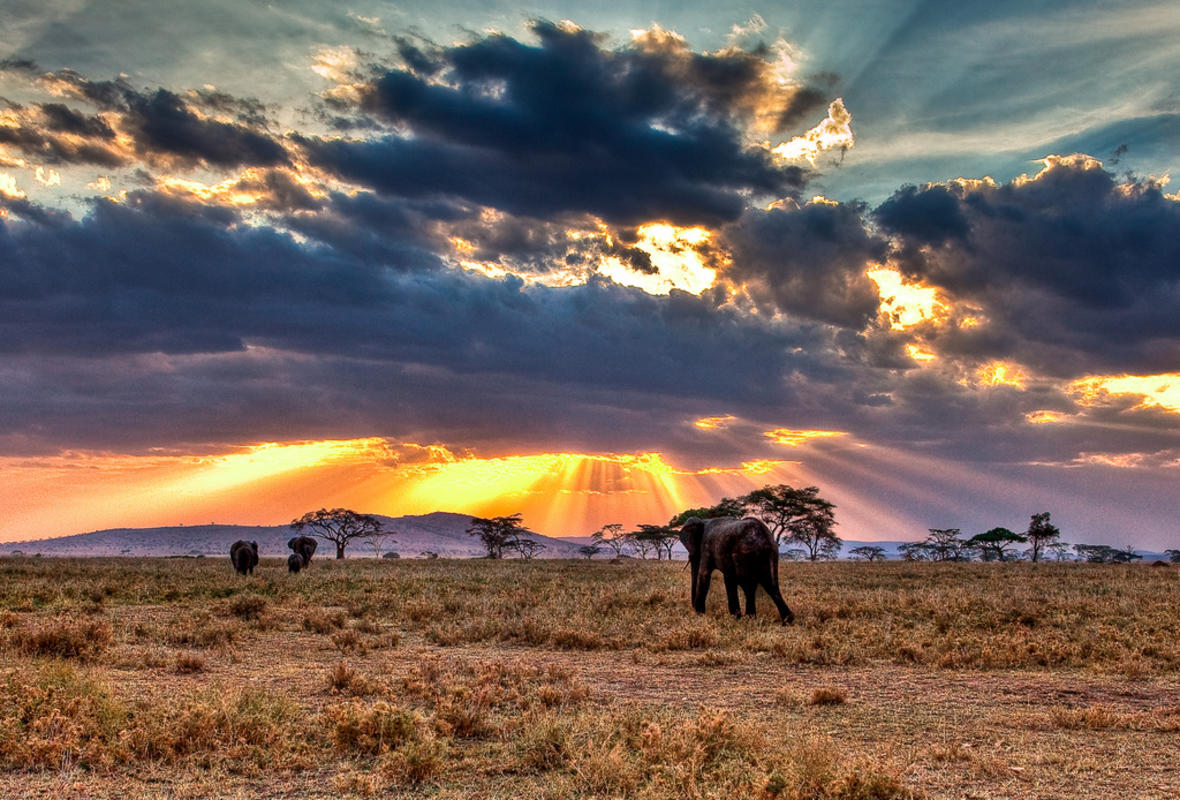 Tanzania’s wildlife reserves and national parks are the obvious main draw, with the likes of the Serengeti plains (for the animal migrations) and Ngorongoro Conservation Area making the country world famous, but these can only be seen on a guided safari. Mount Kilimanjaro—accessible even to inexperienced hikers—is another standout attraction, while the beaches in the Zanzibar archipelago are also popular. The old town of Zanzibar city has the most impressive urban landmarks.

The Serengeti is the star of Tanzania and, along with the Maasai Mara Reserve in Kenya, is one of the main draws to the Africa in general. Stretching into neighboring Kenya, this vast plain—know as the endless plain in Maasai speak—sees the Great Migration where two or three million animals, including herds of wildebeest, head for seasonal grazing. Lions and cheetahs bring up the rear to take out the weak, while massive crocodiles take opportunistic swipes at individuals crossing the rivers. The migration heads northward in June, returning from November, with January and February the best months to be on safari. Address: Serengeti National Park, Serengeti, Northern Tanzania Phone: +255-27-250-3471 Website: http://www.serengeti.org/

The 19,340-foot volcanic cone of Mount Kilimanjaro is one of the world’s most striking mountains as it rises right out of the flat African plains. It is the highest solitary peak on earth and makes for amazing hiking. Even inexperienced trekkers can climb it (with guide) and there are half a dozen routes via the lush rainforest around the base. The Marangu trail is the most popular, taking five days and including stays in mountain huts. Sunrises on the Tanzania mountain are very special and the area is best experienced August through November. Address: Mt Kilimanjaro National Park, Hai Phone: +255-27-250-3471 Website: http://www.tanzaniaparks.com/kili.html

Home to the world famous Ngorongoro Crater and Olduvai Gorge, the stunning Ngorongoro Conservation Area rises over the Serengeti in the north. The main draw is the crater itself, which was formed by a caldera volcano that collapsed in on itself due to the size. The result is a ring of mountains clad with forest and a 12-mile diameter, half mile deep, crater containing thousands of animals, including rhinos, buffalos, hippos, zebras, wildebeest, and flamingos. There’s good guided hiking around the rim, where lodges have been set up. Tours of the crater floor are by four-wheel drive. Address: Ngorongoro, Northern Tanzania Phone: +255-27-253-7006 Website: http://www.ngorongorocrater.org/

This stunning UNESCO World Heritage site is much less visited than the great Tanzanian wildlife reserves in the north and is one of the best places to spot a rhino. The Selous Game Reserve is massive and contains a wider variety of animals than the Serengeti, plus it is relatively close to Dar es Salaam. Mikumi National Park adjoins Selous, while off to the northwest are the Udzungwa Mountains, which boast very good hiking and camping. Address: Morogoro, Southeastern Tanzania Phone: +255-22-212-8485 Website: n/a

Zanzibar is the main island of the Zanzibar archipelago, which lies off of the east coast of Tanzania. It is noted for its exotic beaches, great diving and deep-sea fishing. The old section is known as Stone Town, and boasts intriguing Arabic buildings, twisting alleys and busy souks. The “Spice Island” was also known for its vast fruit and spice plantations and for the slave industry, and there are dozens of other landmasses in the chain including Pemba Island. Address: Zanzibar Archipelago, East Coast Phone: n/a Website: n/a

The old part of the city of Zanzibar is the center of the spice trade. Locally known as Mji Mkongwe, it was used as a base by many people, including the Portuguese, Persians, and British and is a place of tight, winding streets and intriguing old bazaars. There are mosques, churches, mansions, and squares galore which make for an interesting Tanzanian excursion on foot. Be sure to visit the Slave Market, Anglican Cathedral and Old Fort. Address: West Zanzibar Phone: n/a Website: n/a

Also known as the Arab Fort, Zanzibar’s Old Fort—residing in Stone Town—is the oldest building in Tanzania. It was constructed by the Omanis in the 17th century to keep the Portuguese out, protecting their hold on the lucrative “Spice Island,” and was later used to hold slaves and as a rail depot. Today it is home to the Cultural Center along with arty shops and the occasion dance troupe. A good viewing angle can be seen from the neighboring House of Wonders, another popular Stone Town landmark. Address: Sukokuu Street, Stone Town, Zanzibar Phone: n/a Website: n/a

A quieter alternative to Zanzibar, Pemba Island is farther north in the archipelago and is celebrated for its scuba diving. It features vertical underwater cliffs and rich corals with several operators running reasonably priced day trips out to the best sites. Pemba also has a striking interior strewn with farms, while Chake-Chake features impressive archeological sites. You can fly here or take the ferry. Address: Zanzibar archipelago, Northeastern Tanzania Phone: n/a Website: n/a

Touted a “Haven of Peace”, the Tanzanian capital is a sprawling port town to the south of Zanzibar. The once diminutive fishing village today is a vast metropolis made up of several cultures and features a mix of Swahili, Asian, British, and German buildings. There are some interesting museums, including the National Museum, while the Botanical Gardens make a great escape on a hot day. Kariakoo Market is good for souvenirs or you can spend your day lazing on the beaches of nearby Bongoyo Island, accessible by cheap ferry. Address: Dar es Salaam, Eastern Tanzania Phone: n/a Website: n/a

Tanzania’s foremost museum is actually a collection of five museums that include the Village Museum, the National History Museum, Arusha Declaration Museum, and the Nyerere Museum. Originally set up in honor of Britain’s King George, the main National Museum covers the history of the county. Exhibits include the Paranthropus boisei bones, Kilwa relics, artifacts from German and British rule, and Chinese pottery. The museum is close to the botanical gardens for a full day of sightseeing. Address: Museum and House of Culture, Shaaban Roberts Street, P.O. Box 511, Dar es Salaam Phone: n/a Website: http://www.houseofculture.or.tz/

Arusha Arusha is the main gateway town to the Northern Safari Circuit, lying just east of Serengeti National Park and the Ngorongoro Conservation Area. It’s a sizable place with good facilities, although it is merely a launch point for Tanzania’s star attractions. Must-dos include the huge Mount Meru overlooking the town, the nearby villages and the Maasai market. Address: Arusha, Northern Tanzania Phone: n/a Website: n/a