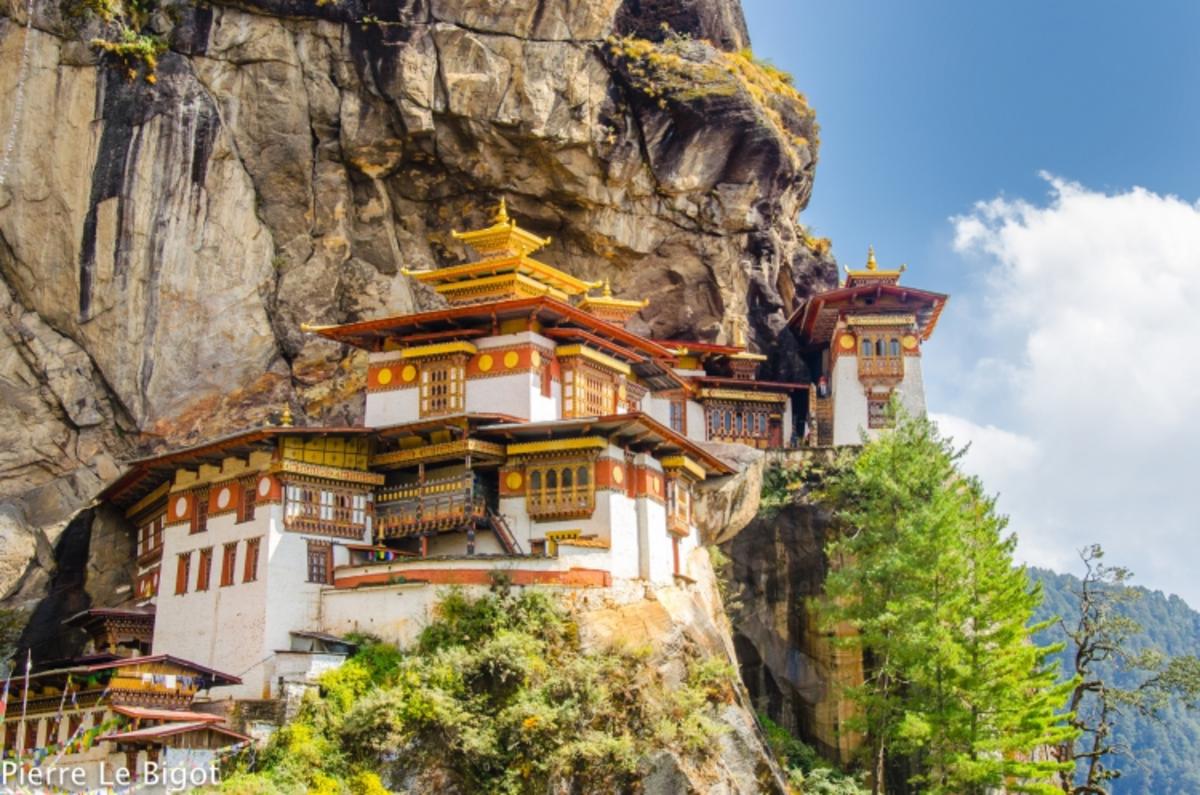 This devoutly Buddhist kingdom is ruled by the young King Jigme Khesar Namgyel Wangchuck, whose father introduced the famous theory that Gross National Happiness is more important than Gross National Product. As a result, Bhutan is the only country in the world which measures its inhabitants’ happiness. So far, the experiment seems to have been successful.

Excavations and ruins suggest Bhutan was settled as long as 4,000 years ago, although the written history of the area begins around the time Buddhism was introduced to the central region of Bumthang, in the 7th century. Legend states the great Tibetan lama Guru Rinpoche visited Bhutan in the 8th century. Influenced first by neighboring Tibet and in the 14th century by Yuan Dynasty China and its Mongol rulers, the country’s political development has been strongly affected by its religious history.

Previously divided into warring fiefdoms, Bhutan was finally unified in the 17th century by Shabdrung Ngawang Namgyal, a military leader and Tibetan lama who escaped persecution by fleeing Tibet. Shabdrung was responsible for the series of defensive fortresses still visible today and initiated a legal code to bring the local rulers under central control. Both moves were instrumental in protecting Bhutan from raids by the warlike Tibetans.

During Shabdrung’s rule, Bhutan was visited by Portuguese Jesuit explorers on their way to Tibet, which was the first contact the country had with Europeans. After Shabdrung’s death in 1651, which was kept secret for an astonishing 54 years, Bhutan again returned to internal conflict and, in 1711, began a war with the powerful Mughal Empire. This unwise move led to an unsuccessful attack by the Tibetans in 1744 and chaos in the country.

By 1772, Bhutanese forces had captured the nearby state of Cooch Behar, whose ruler appealed to the British East India Company for assistance. In 1774, having driven the Bhutanese forces out of the occupied state, the British East India Company attacked Bhutan itself. A peace treaty forced the country back behind its earlier borders, and conflict with British forces continued for 100 years until the Duar War in 1864, which was won by the British.

Civil war raged on in Bhutan from the late 19th century to 1907, and the establishment of the monarchy did little to bring peace. When India won independence from British rule in 1947, Bhutan was the first country to recognize the sub-continent as an independent country, and, in 1953, the third Bhutanese king, Jigme Dorji Wangchuck, formed a national assembly followed by a cabinet in 1964. Hindu Bhutanese originally from Nepal were forced out of the country in the 1990’s in an effort to strengthen the country’s Tibetan Mahayana Buddhist identity and culture.

Bhutan’s culture is strongly based on its Tibetan form of Mahayana Buddhism, which contains a sprinkling of Tibet’s ancient Bon shamanist religion. The country’s rich heritage, protected by Bhutan’s isolation from the modern world until the 1960’s, is still very much in evidence. For most visitors to the country, Bhutan’s traditions and uniqueness are the main attractions, just ahead of its spectacular and mostly unspoiled natural beauty.

Bhutanese national dress is still worn across the country, and its design is tightly linked to class and social status. Men wear a belted, knee-length robe and women wear ankle length dresses, again belted at the waist. The texture of the fabric, its colors, its embroideries, and its woven decorations all determine the wearer’s class, as do the colors of the scarves and shawls carried by women. In Bhutan, traditionally a feudal society, status plays a strong part in human interaction.

Bhutanese law requires the wearing of the national costume in all public places, especially during the many religious festivals. These occasions see women in their finest, bedecked with heavy jewelry which is ornamented with coral and uncut turquoise stones. Family life revolves around the temples, and inheritance passes through the female line. Arranged marriages are common in rural areas and, occasionally, polygamy is an accepted state.

Etiquette here is important, with a government ministry responsible for maintaining the standards and prerequisites of clothing, eating, speech, and respect to officials and the Buddhist clergy. The long-protected indigenous forms of the Buddha’s teachings are preserved by a charitable institution set up in 2002. The two main languages of Bhutan, Sharchop and Dzongkha, are closely related to the Tibetan language, while Bhutanese art with its innumerable divine beings is closely related to Tibetan art.

The Bhutanese national sports of archery and digor, which involves the throwing of horseshoes and metal balls, are firmly rooted in the cultural heritage of the country. Archery contests are regularly held, and involve as much a social element as competition. Dancing, music, food, and drink are part of the riotous challenges between villages, with local supporters doing their best to distract the rival team. Another popular team sport involves throwing heavy wooden darts at a target between 30 and 60 feet away.

Click here to learn about the Weather in Bhutan