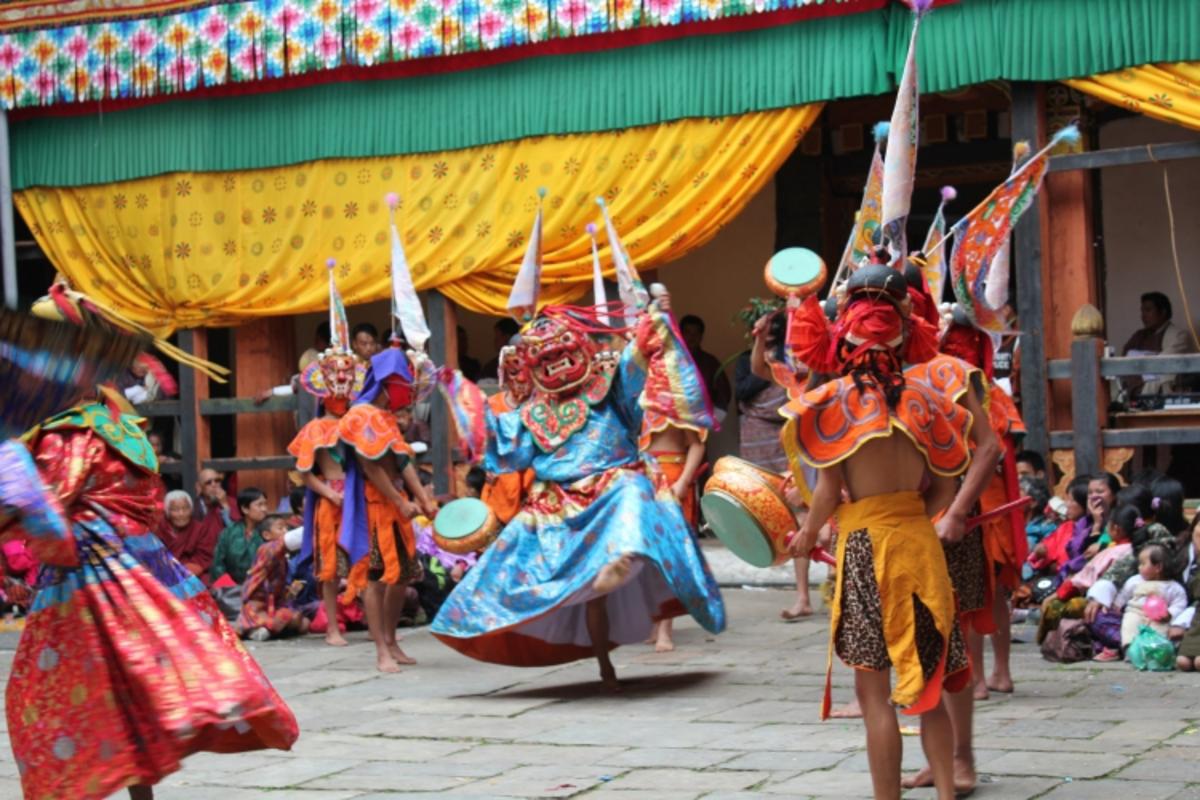 Bhutan holidays are invariably based on events in the Buddhist calendar, and occur all over the country throughout the year. Lasting between two and four days, they are joyous occasions marked by masked and costumed dances by monks, as well as townspeople. These dances are accompanied by traditional music and song, processions, trials of archery, and other indigenous activities. Bhutanese festivals aren’t much like the fiestas and carnivals of the Western world as they involve centuries-old rituals which include shamanist and animist elements. The Tshechu festivals are the most important, and include the unveiling of huge and rare painted silk Buddhist thangka (hangings).

This celebration of the arrival of Bhutan’s famous colony of black-necked cranes takes place in Phobjikha Village every November. It’s an event which not only celebrates the birds return to their nesting place, but is aimed at the conservation of these rare species. The birds are welcomed home with costumed and masked dances representing the cranes, dramatic performances, and children’s songs.

Set in Trashiyangtse in the east of the county, this festival celebrates the banishing of a local demon by an 18th century lama, Ngawang Loday, who built the stupa in memory of the event and is a popular place of pilgrimage. The festival takes place in Bhutan every March.

This lively festival takes place annually in July, showcasing the nomadic lifestyle of the people in Bhutan, as well as honoring their religion, traditional songs, dances, and music. It’s a display of living culture in an area that only recently began accepting outside visitors.

The Gomphu Kora Festival, another of Bhutan’s pilgrimage events, is set in the eastern region and takes place every March. Its heart is the circumnavigation of an ancient cave linked to an 8th century legend in which an evil spirit was destroyed by Guru Padmasambhava. Pilgrims have visited the site for more than a millennium, including those from the Dakba tribe of north India.

This rare event takes place in a remote valley close to Thrashigang Dzong, which is inhabited by the nomadic Brokpa tribe. The high valley is untouched by the modern world and its peoples live as they have for centuries, rearing yaks and other animals. Bartering takes the place of currency and the women can take several husbands. The three-day festival is a unique occasion that ends with the unfurling of a huge thangka (Tibetan silk painting).

One of the largest events in Bhutan, the three-day Thimphu Festival begins on the 10th day of the eighth lunar month. Costumed dances include the Dance of the Black Hats and masked movements performed by monks. Rituals and prayers continue for a full three days, concluding with the display of a giant, holy thangka.

This festival, held in Bumthang’s Ura valley every May, is famous for its unique Ura Yakchoe dance. During the event, a sacred relic is displayed, and its legend is retold through dramatic interpretations. The story goes that one day; an old woman was visited by a llama, who asked her for a glass of water. When she returned with it, the llama had disappeared, leaving behind a sacred image, which has been owned by her descendents to this day.

Trongsa in central Bhutan is the sacred heart of the country, and its Trongso Tshech draws thousands every December. Held over four days, the events sees devout Buddhists arrive from across the country to receive blessings from the unfurling of the sacred Thongdrol on the final day. The mask dances and traditional rituals have been performed here for hundreds of years.