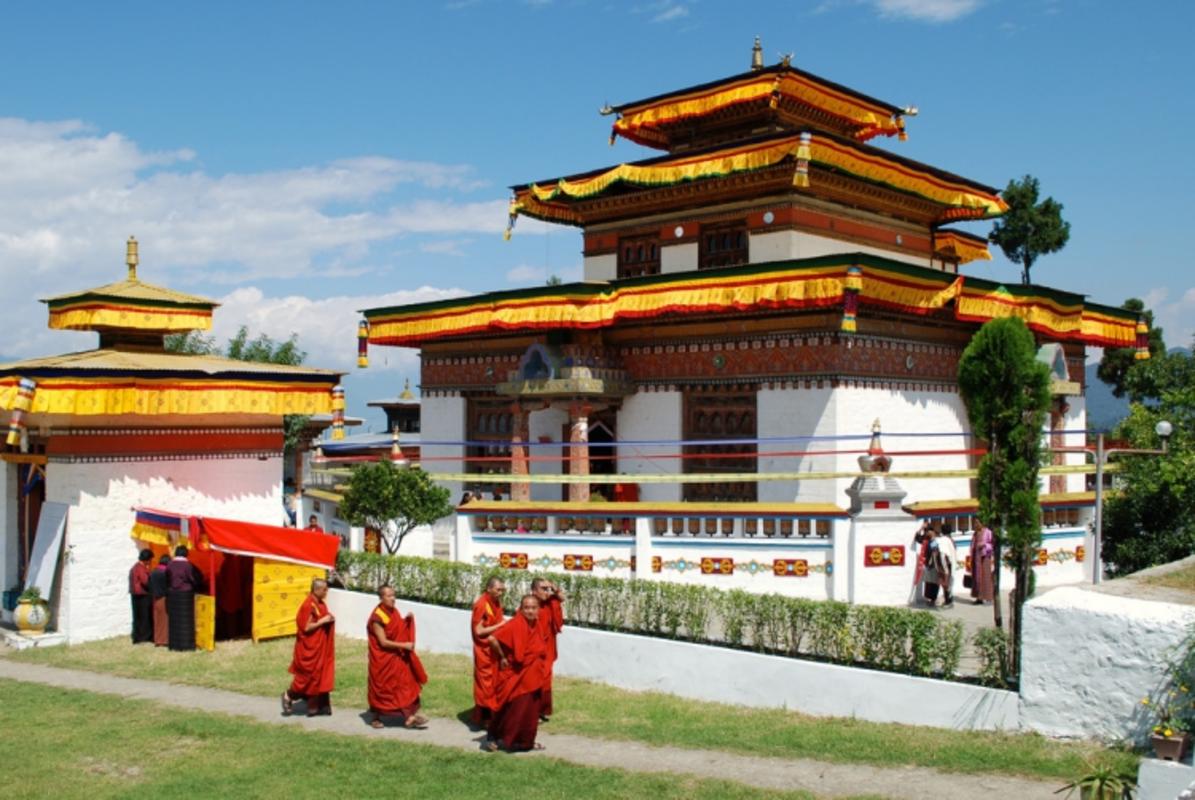 Attractions in Bhutan encompass religious sites, remote traditional communities, unspoiled natural vistas, and the breathtaking magnificence of the high Himalayas. The country’s 20 unique districts all hold numerous natural and manmade landmarks, with the prearranged tours and their professional guides able to cover premier sites, giving the best views, most famous temples, and most authentic settlements.

Set in the Wang Valley, Thimphu has been Bhutan’s capital since 1961. It’s the most westernized city in the country, with five-star hotels, commercial areas, and internet service sitting side by side with the unique Bhutanese architecture evident in the city’s homes, temples, chortens, fortresses, and monasteries. Address: Wang Valley Phone: n/a Website: http://www.abto.org.bt/destinations/thimphu/

Set in a broad, fertile valley, picturesque Paro is home to the National Museum and row upon row of traditional, brightly-decorated homes with charming designs and motifs adorning their walls. It’s the first sight of Bhutan for air arrivals, as the tiny airport is here and a single national highway links it to the capital. The city is overlooked by spectacular Taktsang Monastery from its site halfway up a sheer mountain face. Address: west of Thimphu Phone: n/a Website: http://www.abto.org.bt/destinations/paro/

Over 500 years old, this temple is linked with Bhutan’s favorite folk hero, known as the Divine Madman. Born in Tibet, Lama Drukpa traveled the length and breadth of Bhutan, raging against the country’s strict religion-inspired regime and illustrating his own beliefs with extremely offbeat sexual practices and other excesses. The maverick saint’s popularity with everyday Bhutanese continues today, with brightly-colored penises a favorite for decorating the exterior walls of houses. The present abbot is believed to be the reincarnation of Lama Drukpa Address: Punakha Phone: n/a Website: http://www.lonelyplanet.com/chimilhakhang

One of the country’s finest fortresses, Rinpung Dzong has protected Paro from its perch on a lofty promontory for over 350 years and was the headquarters of Bhutan’s government from the late 17th century to the early 1900s. A highlight is the imposing picture of the wrathful aspect of the deity Chenresig in the form of Gasin-re. Address: Paro Valley Phone: n/a Website: http://www.abto.org.bt/destinations/paro/

Wangdichholing was the first palace in Bhutan not originally built as a fortress, and was the royal residence of the country’s first king, Ugyen Wangchuck. Built in 1857, the giant structure towers over its valley and is now used as a school for young novice monks. Five massive prayer wheels are found in the square chortens. Address: Jakar, Burnthang District Phone: n/a Website: http://www.abto.org.bt/destinations/bumthang/

The remote, rugged, and totally unspoiled beauty of the Haa Dzongkhag valley holds isolated, traditional communities mostly involved in growing enough crops on the two percent of arable land to sustain them through the cruel winter months. Yaks are the beasts of burden here, and the many temples are dedicated to the district’s protective deity, Chhundu. Forests of oak, blue pine, and fir conceal ancient monasteries with legendary histories going back hundreds of years. Address: Western Bhutan Phone: n/a Website: http://www.abto.org.bt/destinations/haa/

The Bumthang District of Bhutan is the country’s spiritual heartland, containing the most precious holy sites, and a center for ancient traditions. Buddhist influences are everywhere: prayer flags flutter in the winds, large prayer wheels adorn the temples, and sacred symbols are seen painted on the walls of homes. The original Himalayan culture thrives here, and the Jakar Dzong (Fortress of the White Bird), set atop the summit of a mountain guarding the Chhoekhor Valley, watches over the land as it has for generations. Address: Central Bhutan Phone: n/a Website: http://www.abto.org.bt/destinations/bumthang/

Famous as the nesting place for Bhutan’s flocks of black-necked cranes, Wangdue was legendarily a desert and still has a profusion of cacti growing wild. Two national parks, Jigme Dorji and Jigme Singye, extend into the district, and the fortress of Wangduephodrang Dzong clings to a precarious cliffside above the valley. Address: between Trongsa and Phunakha Phone: n/a Website: http://www.abto.org.bt/destinations/wangdue/

Click here to learn about Food and Restaurants in Bhutan