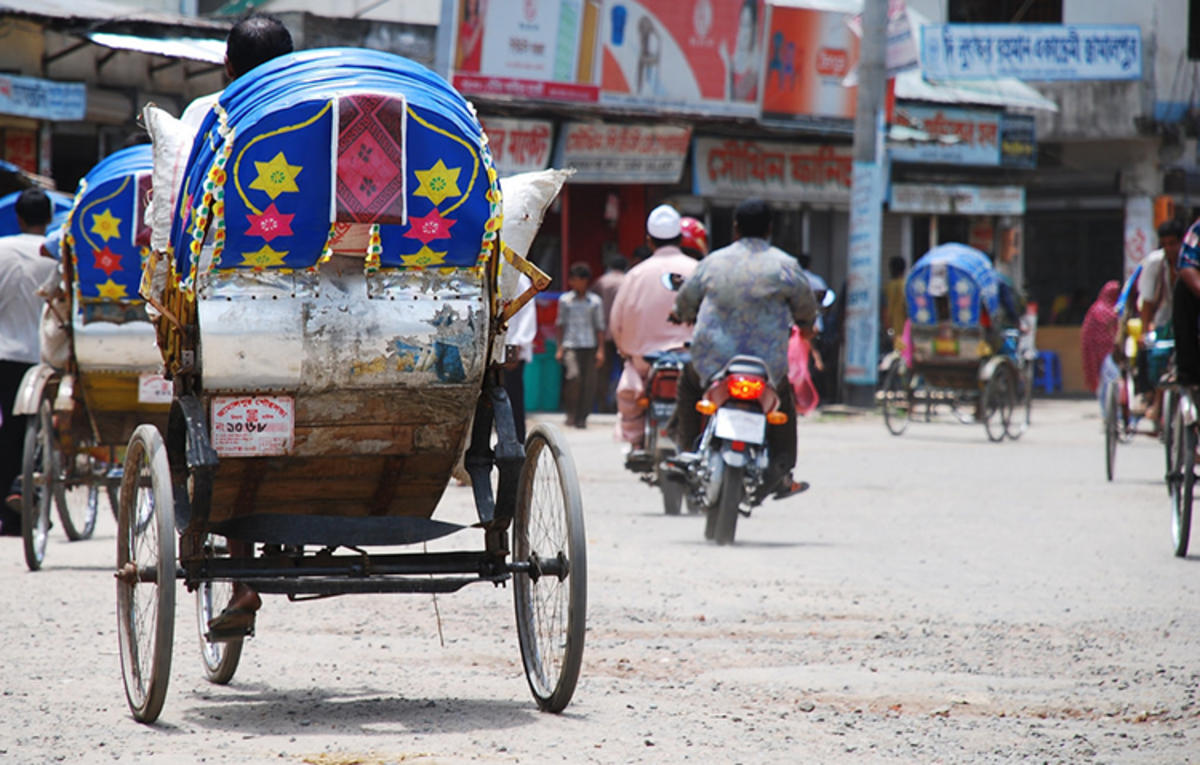 It’s easy to find taxis in Bangladesh’s capital, as well as other large cities like Chittagong. In Dhaka, black or yellow cabs ply the roads and they all have meters, but you will likely still have to negotiate the fare. Black taxis start at Tk25, but yellow cabs charge more because the vehicles are newer and air conditioned. It is advisable to take a CNG or an auto-rickshaw to travel cheaper and as a way to elude the persistent street vendors and beggars. These three-wheel taxis run on compressed natural gas, giving them their name. Like conventional cabs, these ubiquitous local taxis are metered, though drivers usually choose not to use them. Traffic is very congested during peak hours so allow plenty of time to get around. There are many taxi providers in Dhaka, including Anudip Autos Ltd. (+88-02-912-5138), Cosmo Cab (Pvt) Ltd. (+88-02-812-7191) and Navana Taxi Cab Co. Ltd. (+88-02-955-2212).

Renting a car is possible, although not always advisable. Navigating can be tricky as there are many reckless drivers, and locals try to do everything possible – including driving down the wrong side of the road – just to get ahead. Traffic cops man most intersections, but this does not necessarily mean better driving conditions. If you are up for the challenge, there are many rental companies in Dhaka and elsewhere in the country, including Bangladesh Parjatan Corporation (+88-2-914-0790 or +88-2-811-7855-9) and Dhaka Tours Rent-A-Car Association (+88-2-966-3134 or +88-2-861-1313). Popular international companies including Europcar and Hertz (+88-2-988-1290) are also here. Getting a car with a driver is a better option, especially when visiting for the first time.

Bangladesh’s waterways are not just for sightseeing and cruises, they are widely used for passenger and freight transportation. Rocket Steamer offers connections between Dhaka and Khulna via Barisal, along with local boat tours. The service runs on a regular schedule, but booking in advance is advised. The journey takes 26 to 30 hours to complete so it’s worth paying extra for more comfortable accommodations. The fares are quite reasonable (even for first- and second-class travelers). Ferries often have a central sitting or dining room serving different kinds of Bengali meals. Smaller boats also serve shorter distances, but are best avoided during rainy seasons and holidays when city dwellers flock to the piers to return to their rural hometowns.

City buses can easily get overcrowded and if you don’t want to join other passengers on a thrilling high speed joy ride, opt for a rickshaw or taxi instead. Buses that run domestic routes are more peaceful and generally in better condition. Nonstop services are available to and from principal towns like Dhaka, Saidabad, Gabtoli, and Mohakhai, all of which have central terminals. Bangladesh Road Transport Corporation maintains a reliable, countrywide service network.

The rail system is operated by Bangladesh Railways and has routes throughout the country. An express train between cities is also available with fares the same and sometimes cheaper than bus tickets, but journeys can last longer as a result of roundabout routes. Bookings can be made over the phone if you speak Bengali, otherwise, it is better to purchase tickets at the station from computer desks.