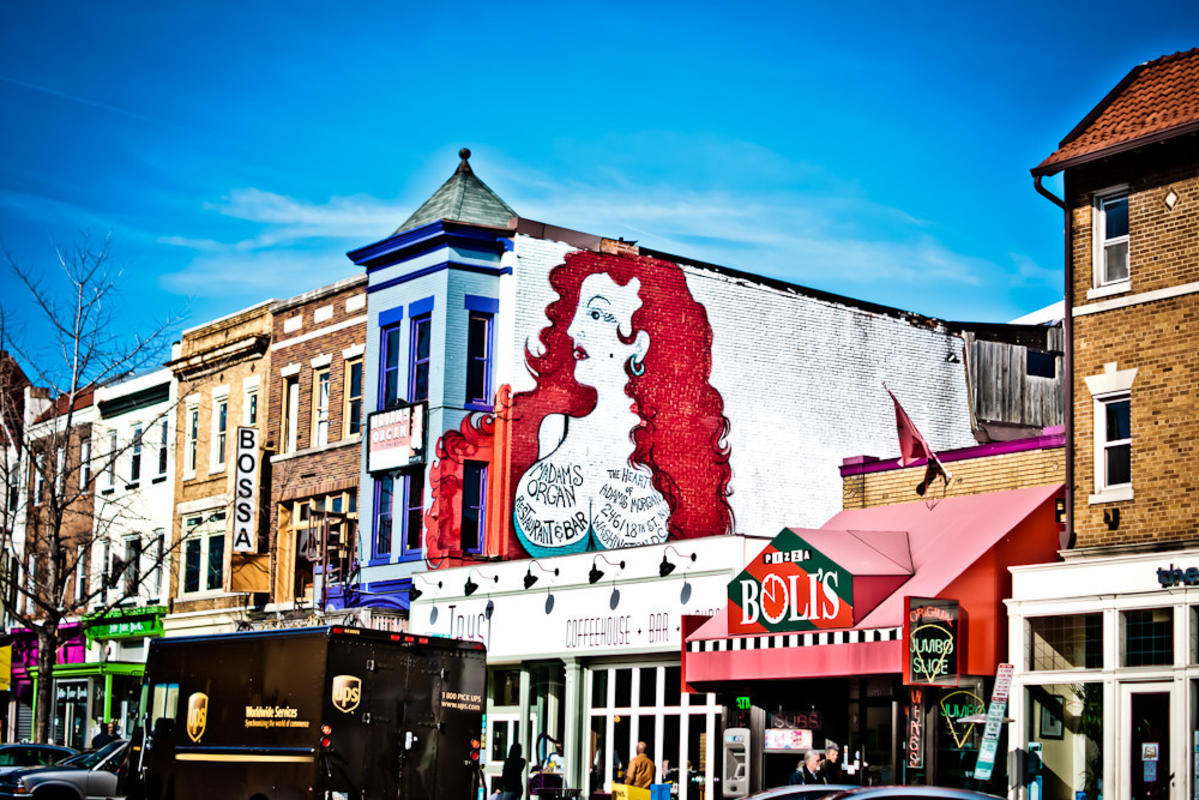 Ethiopian cuisine is a staple in Washington, DC thanks to its large Ethiopian community. It generally consists of a spongy bread (injera) with a spicy stewed mix of meat and vegetables. Salvadoran pupusa (corn tortillas stuffed with cheese, fried pork or refried beans) has become a common word in the city and all visitors leave knowing it. As the capital city of the nation it is easy to get hold of American wines and microbrews, though international wines and beers can also be seen everywhere.

Bars and Pubbing in Washington

There is no shortage of places to drink in the capital city, with everything from pumping nightclubs to upscale jazz bars at your fingertips. Despite the fact the go-go performances have been banned in DC, these can still be found in clubs that front as jazz clubs. The best place in the city to see a go-go performance is Takoma Station Tavern (6914 4th St NW, Takoma, Northeast) though this area is certainly not the center of the city’s nightlife. The Adams Morgan area is home to some of the city’s hottest clubs such as the sushi bar/nightclub Saki (2477 18th St NW). No trip to Adams Morgan is complete without an evening at Madam’s Organ (2461 18th St NW), which is a fixture in the neighborhood.

The Dupont area is dotted with bars, nightclubs, cafés, and lounges and is a well-established nightlife spot. Bier Baron (1523 22nd St NW) serves a selection of 500 beers from around the world, while Cafe Citron (1343 Connecticut Ave NW) is a great place to sip on mojitos and margaritas. One of the city’s most famous clubs is the beautiful Eighteenth Street Lounge (1212 18th ST NW), whose DC clientele are as sophisticated as this revamped mansion.

Shaw’s U Street is for the more stylish DC crowd, which can be seen at the wine bar Local 16 (1602 U St NW). Live music is among the best in this area, with The Black Cat (1811 14th St NW) being a landmark hosting big and small name hip-hop and rock acts. Bohemian Caverns (2001 11th St) is the best place to listen to live jazz and has hosted the likes of Duke Ellington himself.

Dining and Cuisine in Washington, DC

One of the best places to dine in DC is Komi (1509 17th St NW, Dupont Circle), which has been rated as one of the best restaurants in the country and serves signature dishes such as chopped diver scallop with caramelized coconut and suckling goat with pita. Old Ebbitt Grill (675 15th St NW, West End) is one of the most famous restaurants in the city and has served steak to former presidents Cleveland, Harding, Grant and Roosevelt.

Etete (1942 9th St NW, Shaw) is the best Ethiopian restaurant in DC and is the one all others are compared to, while the best pupusas can be had at Don Juan Restaurant (1660 Lamont St NW, Adams Morgan). The upscale Mexican eatery Oyamel (401 7th St NW, East End) has a real Aztec feel serving classic dishes such as tacos and ceviches with an upscale twist.

Further out of the tourist area is the acclaimed Palena (3529 Connecticut Ave NW, Upper Northwest) that is owned by the former chef of the White House, Frank Ruta. Dishes here are influenced by traditional French and Italian cuisine with the chef’s own spin. BlackSalt (4883 MacArthur Blvd NW, Upper Northwest) is another famous restaurant in the same area, which is noted for its inventive seafood dishes such as Arctic char with green mole and wood roasted swordfish with pine nut-anchovy butter.

Click here for Shopping and Leisure in Washington DC