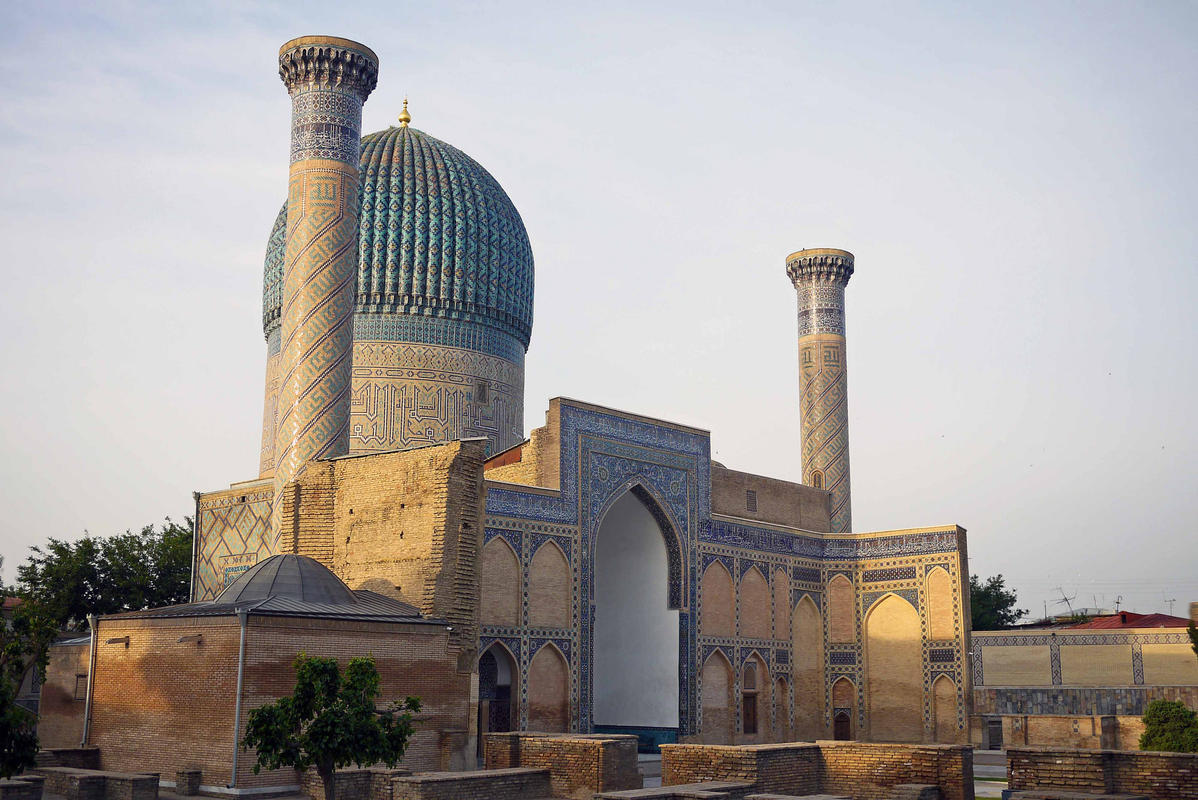 Visitors to Uzbekistan will be able to learn a lot of history in this part of the world as the country is home to a number of ancient and medieval cities, some of which are now UNESCO World Heritage sites. Within Bukhara and Samarkand are historic palaces, fortresses, mausoleums, and medreses (Islamic schools). As for natural attractions, national parks are aplenty, with the Nuratau-Kyzylkum Biosphere Reserve one of the best ones to visit.

Perhaps no other place in Central Asia encapsulates the grandeur and richness of the past civilizations that lived here than Registan Square in Samarkand. Meaning “Sandy Place” in Tajik, Registan served as the commercial center and central bazaar of this major medieval city along the Silk Road. The square has been reconstructed many times throughout Uzbekistan’s history. Today, visitors walking around the square will see three medreses (educational institutions for the study of Islam), each with its own large imposing gateway. Address: corner of Registan and Tashkent Registan, Samarkand Phone: n/a Website: n/a

Part of the reason why Samarkand became the grand imperial Central Asian capital was because of the great conqueror, Timur or Tamerlane. He established his capital in Samarkand in the 14th century and under him, Samarkand flourished. It is for this reason Timur, along with his grandsons, is buried in the city, at the Gur Emir Mausoleum. Visitors can take a look at the tombs at this site and marvel at the largest piece of jade in the world that is Timur’s tombstone. Address: Akhunbabayev in Navoi, Samarkand Phone: n/a Website: n/a

Another UNESCO World Heritage site in Uzbekistan is the historic city of Shahrisabz. in the Tajik-dominated mountainous lands of Qashkadarya in the south. While Samarkand was Timur’s capital, Shahrisabz is considered his birthplace. The city’s name means ‘Green City’ but the main attraction here is white―the White Palace, or Ak Saray (also spelled Aq Serai). Ak Saray, Timur’s Summer Palace, was designed to be the largest and most grandiose of his palaces. The size of the complex and the structures within, some of which used to the largest in Central Asia, is impressive. Unfortunately, however, many parts of the complex have been destroyed or now lie in ruins. This includes the 213-foot high towers of the entrance gates. However, its former grandeur can still be gleaned by visitors who walk around the site. Address: Shahrisabz Phone: n/a Website: n/a

In the Uzbekistan capital of Tashkent, visitors shouldn’t miss the most important historic site, the Moyie Mubarek Library Museum. This important Islamic site is where the oldest Quran, the holy book of Muslims, is said to have been found. The Osman (or Uthman) Quran is believed to date back to the 7th century. Being a library, it also contains 20,000 books and rare manuscripts numbering at around 3,000. Many parts of the site have been recently restored and make for a pleasant visit. Address: Zarqaynar 114 Old Town, Tashkent Phone: +998-71-160-0302 Website: n/a

History Museum of the People of Uzbekistan

Another site worth seeing in the country’s capital is the History Museum of the People of Uzbekistan. The museum gives a proper lesson on the history of Central Asia, traditionally known as Turkestan, from antiquity to present time. The artifacts contained here include a Buddha statue from a temple in Termez. Many exhibits tell about Uzbekistan’s more recent history, particularly the parts involving Soviet rule in the 20th century. Address: Sharaf Rashidova 30 City Centre, Tashkent Phone: +998-71-139-1779 Website: n/a

Like Samarkand, the UNESCO World Heritage city of Bukhara in the historic Transoxania region has a Registan Square. Here, visitors will find the city’s oldest structure, the Ark. The site served as the fortified residential area of the rulers of Bukhara. It is a town within a town, having been occupied since the 5th century. In the 1920s, however, the site was bombed by the Red Army. Today, visitors will find the ruins of the palaces, temples, military quarters, and warehouses, including the Reception and Coronation Court, last used in 1910 when Alim Khan was crowned here. Address: Old Town Registan Square, Bukhara Phone: +998-65-224-1349 Website: n/a

Uzbekistan has a number of national parks and one of the most worthwhile to see is the Nuratau-Kyzylkum Biosphere Reserve. Located between the desert and mountains of Central Uzbekistan, the reserve receives support from the UN Development Fund. It is a habitat for many of the country’s flora and fauna, including the Kyzylkum ram, the bearded and black griffon-vulture, the golden eagle, the Central Asian juniper, and the Bukhara almond tree. Various eco-tourism activities can be done in the park, along with hiking, horseback riding, and swimming in the lakes and rivers. Address: Visitor Center Nuratau-Kyzylkum, Yangiqishloq Village, Bogdon 1, 131200 Jizzakh Viloyati Phone: +998-72-452-1768 Website: http://nuratau.com