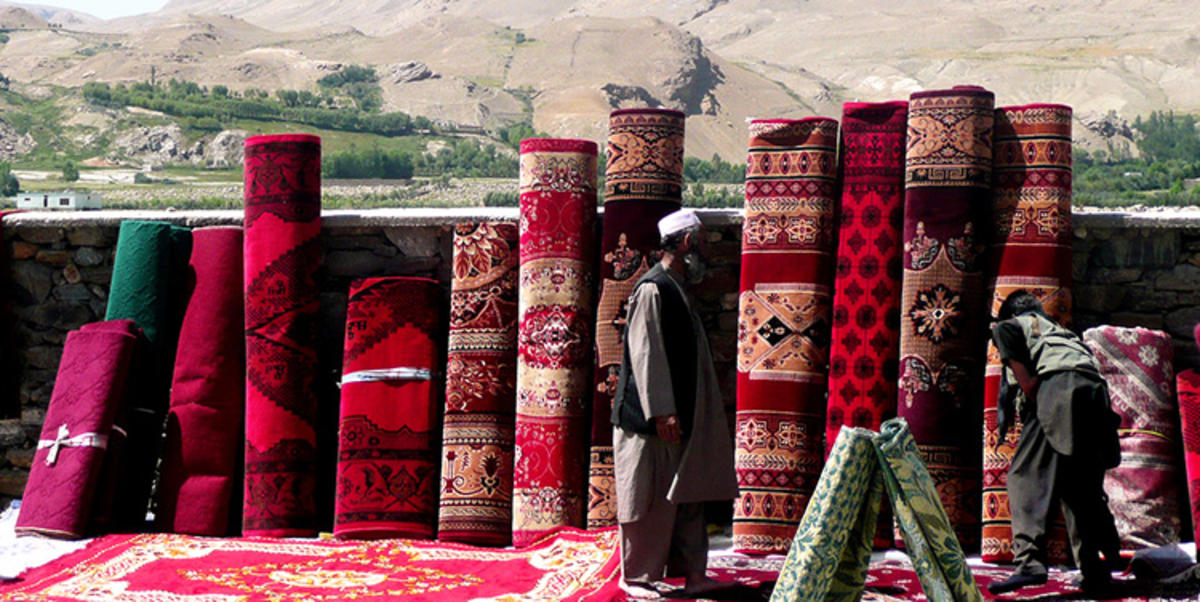 Shopping is extremely fun and rewarding, especially for collectors of ethnic weaves as Afghanistan is most famous for its locally made carpets and rugs and designs and patterns are often copied around the world. Carpet weaving is one of the longest standing traditions in the country, mostly done by Baluchi and Turkoman tribes in the south, west, and north. Bring your haggling skills as not only is bartering an accepted practice, it is very much a part of the Afghan shopping tradition.

In Kabul, you will find two famous shopping districts in Afghanistan. Chicken Street and Flower Street are the go-to spots for local gems, handicrafts, animal hair, jewelry, Buddha heads, and the ever-famous Afghan carpets. Other popular souvenirs include Kandahar embroidery, Turkman hats, Nuristani woodcarving, nomad jewelry, silk, Istaff pottery, brass, copper, and quality glassware from Herat. Do take note though that some of the handicrafts cannot be exported without a proper license.

Metalwork (vases, platters, elaborately decorated pots, and even knives) is also popular in Afghanistan. Many historians and collectors seek out authentic Afghan guns, though these make for rather problematic souvenirs, as importing firearms is extremely difficult anywhere in the world. Afghan jezail and pass-made rifles are of particular interest for enthusiasts.

Baluchi rugs are small carpets, often four by seven feet in size. They are traditionally small because large looms were not practical for the nomadic people who originally used them. Travelers love them because they can easily be carried anywhere. A prayer rug is a common example of a Baluchi rug along with the ‘nomad’s chest of drawers’, which is a type of beautifully decorated saddlebag to hang on tent walls when camping.

Turkoman rugs come in a wide variety of sizes. They can be compared to top of the line Persian carpets, especially when finely woven. Hatchli is a popular design, consisting of a simple cross shape on a vast surface. If you want to save money, buy from local markets and bazaars instead of commercial malls. Depending on how good your bargaining is, you can sometimes get over 50 percent off.

Click here to learn about Aghanistan's Food and Restaurants