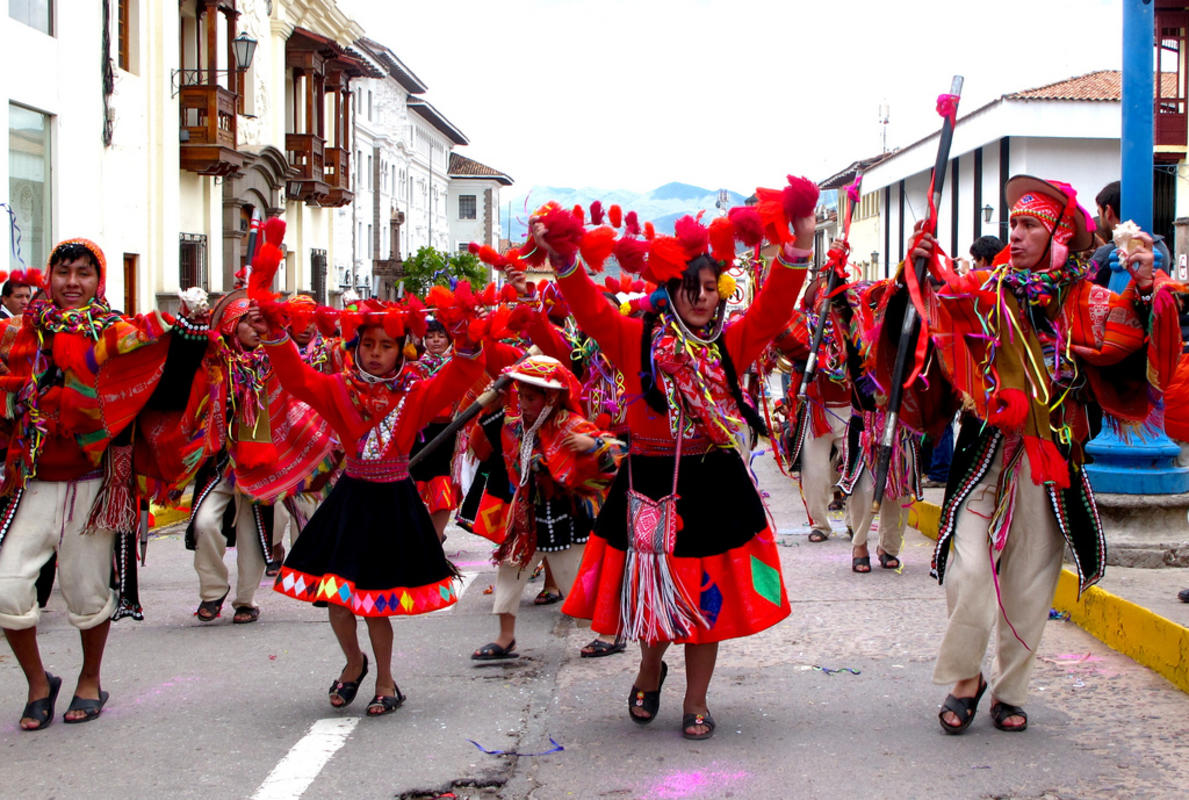 Peru celebrates about 3,000 festivals or fiestas every year. Most of them are localized, to commemorate a community’s patron saint according to the Christian faith that 95 percent of the population subscribes to. Some are national, such as Carnival and Inti Raymi, which integrate indigenous traditions. For something with no religious attachment, you can head to the Peruvian Paso Horse Festival, which honors the local breed, or the colorful Spring Festival, a celebration of dance.

Carnival is celebrated all over Peru at the start of Christian Lent each February, but with regional variations. One common theme is the act of planting a hollowed out tree filled with gifts and then dancing around it. The trunk is then hacked away by dancing couples with a machete until it is brought down. Notable places to experience it are in Cajamarca or Puno.

The Peruvian paso horse was first bred around 300 years ago, mixing a Spanish horse with an Arab stallion. Ever since, it has been a favorite breed worldwide for its strength and agility. This festival is a wonderful opportunity to marvel at the horses and the riders, known as chalans, who dress in a magnificent traditional costume with a white shirt, white pants, straw hat, and vicuna wool poncho. The highlight is the National competition, held near Pachacamac every April for five days.

This festival is held annually in Peru on June 24 to coincide with the Southern Hemisphere’s winter solstice, at the site of Sacsayhuaman near Cusco. It is a traditional Inca event that celebrates the sun, which was important in Pagan religions. The ceremony calls for the sacrifice of two llamas to a high priest, a tradition which has lasted for centuries. After the day’s festivities, the city of Cusco holds nightly celebrations for many days after.

An impressive religious festival held in the city of Cusco every year, Corpus Christi takes place 60 days after Easter when 15 saint and virgin processions come to greet the body of Christ at the Plaza de Armas. Seven days later, another parade sees the saints and virgins return to their resting place. The fiesta is an intriguing mix of Spanish and indigenous influences and the night before visitors are encouraged to taste 12 typically Andean dishes, including cuy, guinea pig, which is a delicacy.

This festival combines hundreds of years of Spanish history with age-old Peruvian traditions. It is celebrated for one week all over the country in the final week of September, but for one of the best, head to Trujillo where there are street parades and locals flamboyantly decorating their homes. A highlight is the marinera nortena, where two people dressed in costume dance and wave a handkerchief in the air to the beat of the music.