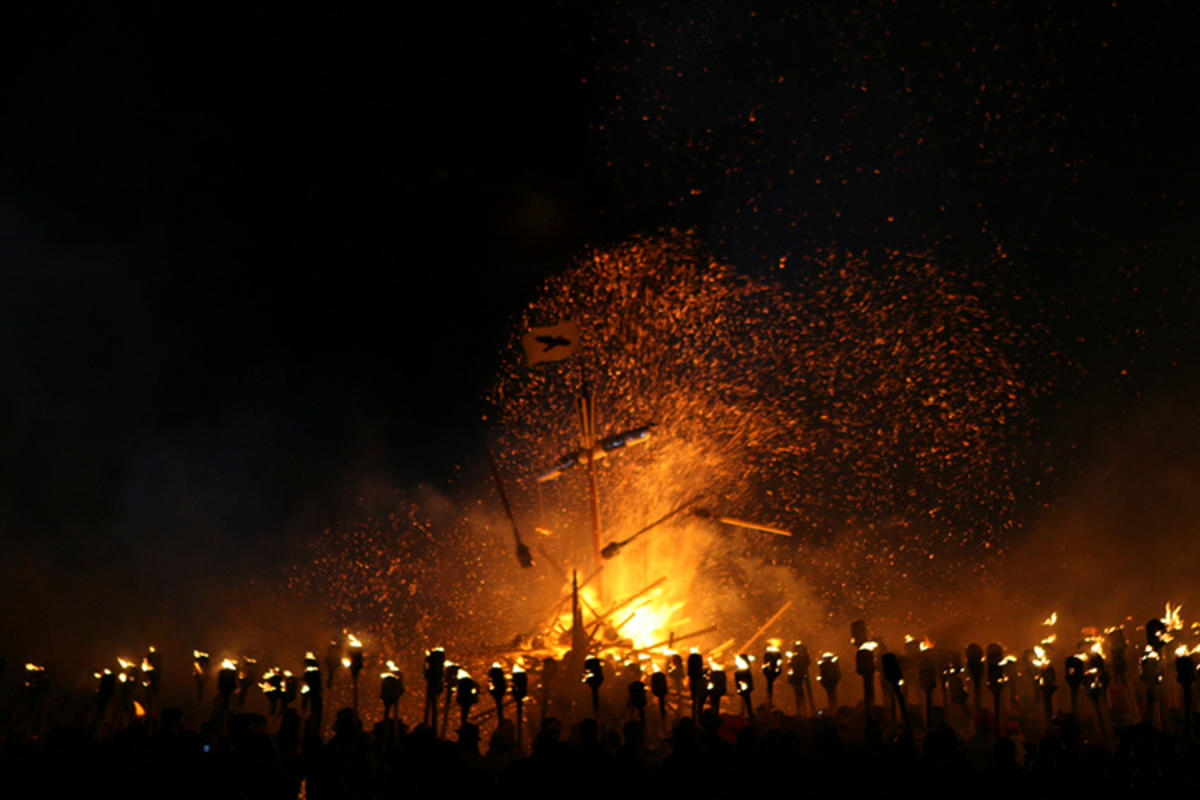 Vikings haven’t pillaged the Shetland Islands in more than 500 years but a walk through its capital city of Lerwick in late January may offer the impression that the warriors still have business to attend to. Bearded men wearing winged helmets and chainmail wield battle axes in the streets while a galley sporting a dragon’s head sits in the harbor.

No, this blast from the past is not a hostile takeover but a part of what is billed as Europe’s Largest Fire Festival. The revelry and fiery traditions of Up Helly Aa act as a momentary escape from the dreary Scotland weather as well as a chance for locals to celebrate their heritage and creativity. 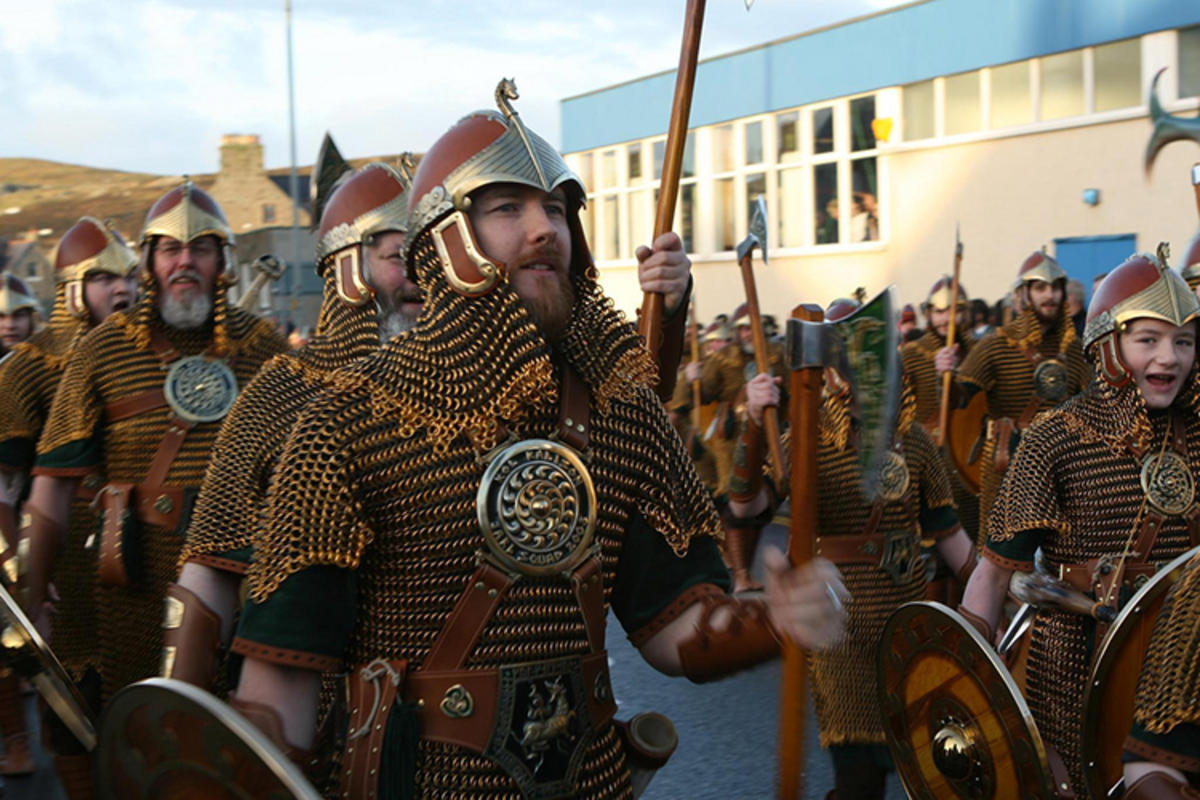 If you’re planning on attending Up Helly Aa, it is imperative that you're able to identify the town’s Guizer Jarl. The Viking leader, his band of faithful followers are essential to the day’s celebrations. They create the costumes, organize the day’s events and lead the parade through town. To be a part of the squad or picked to serve as the Guizer Jarl is an enormous honor and one not taken lightly: the group starts preparations nearly a year in advance.

The festivities begin with a 6 am meeting in the town center where secretly-drafted rules that govern the year’s activities are read. From there, the squad begins their romp through town to feast on food and interact with the locals. The march lasts all day and culminates with the highlight of the festival: fire.

When the sun sinks below the horizon and darkness blankets the village, nearly 1,000 men are given torches to once again wend their way through Lerwick. This time, a crowd of 5,000 people are in tow. From a distance, the procession looks like an impending river of fire. When they reach the burning site, the Guizer Jarl disembarks as torches arc the air and land in the hull of the dragon galley. The structure is soon more flame than boat.

The fire is eventually extinguished but the enthusiasm of the crowd is far from over. Hundreds of guizers visit a dozen beer halls throughout the night, each performing their rehearsed skits and musical performances. The parties are mostly private but render so many useless that the following day has been declared a national holiday. 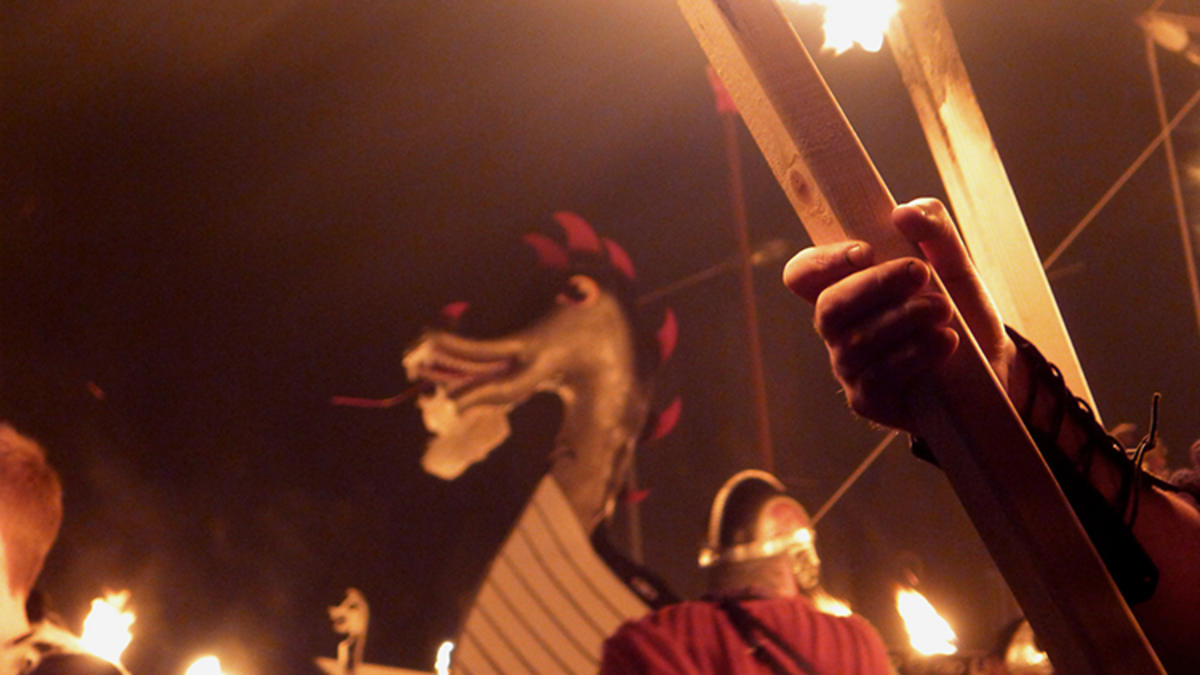 While the revelry of Up Helly Aa may seem nonsensical, its roots trace their way through 12 centuries of Norse tradition. The torch lit procession and burning of the galley hearken back to rituals that took place at the cremation of great chieftains. Elaborate costumes were part of prehistoric fertility rights. The feasting and dancing reflect the merriment of a classic Viking drinking hall.

There is a tremendous amount of pride that goes into the festival’s preparations. No one is allowed to be part of the Jarl’s squad unless they’ve been a resident for at least five years. The intricate design of the shields and outfits take hours upon hours every year and local tradesmen spend months building and painting the galley. It wouldn't be far off to say the townspeople spend 364 days of the year preparing for one day. 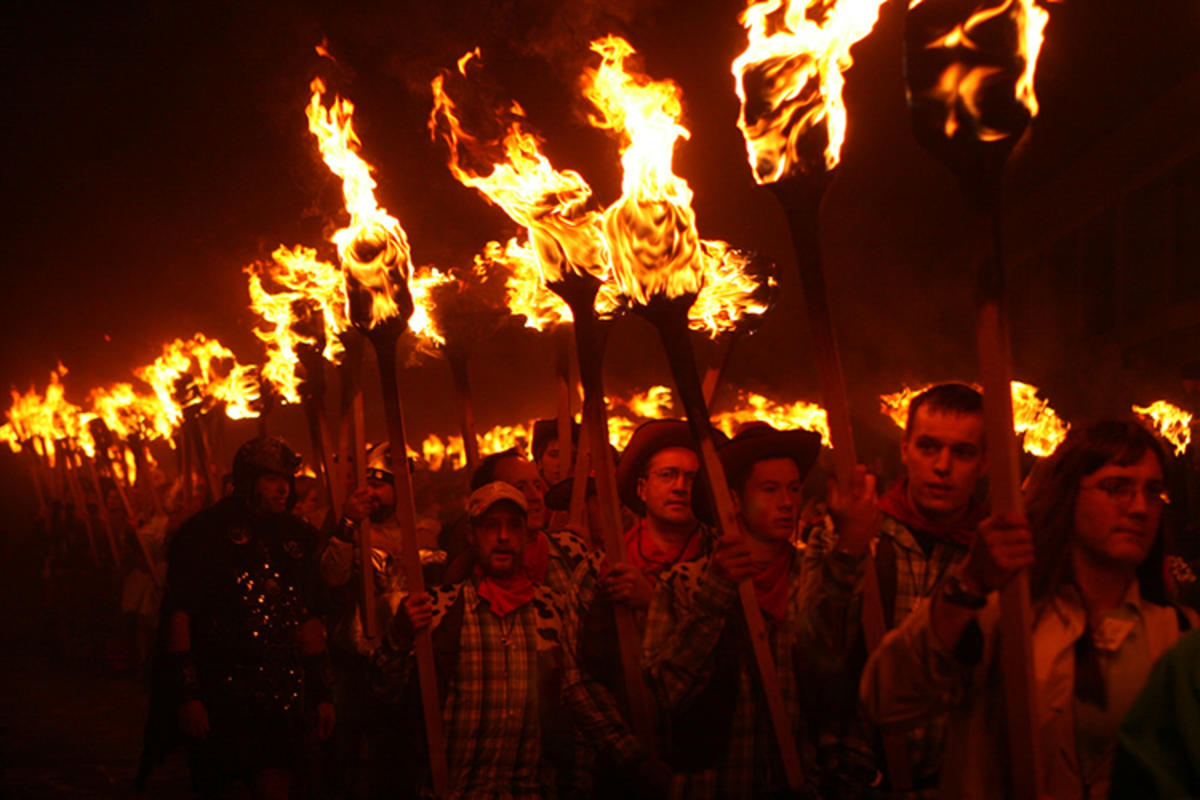 How to Experience It

If you want to see the Viking reenactments in person, you can participate in the morning march or the evening torchlit procession in person. You can buy tickets to some of the late night celebrations by contacting the Shetland Tourist Board in January. For those who can’t make it to the northernmost reaches of Scotland, tune into the city’s 60 North Television station, which provides live streaming of the event or check out their Facebook page for live updates. You'll want to be there though because the fomo is real.
YOU MIGHT ALSO LIKE