The snowmobiling capital of America isn't at a ski resort. It’s actually in Montana in a town called West Yellowstone. Home to just 1,200 people, if you take a look at a map — and an almanac — you’ll see that West Yellowstone is truly a snowmobiling paradise. Situated along the western edge of Yellowstone National Park and between three national forests, West Yellowstone is home to some of the most breathtaking scenery and terrain in the Lower 48. With more than 150 inches of snowfall a year plus 184 days of sun, those backcountry trails and perfectly powdered meadows are ripe for exploring this winter. It’s time to hit the trails while the powder is still fresh. 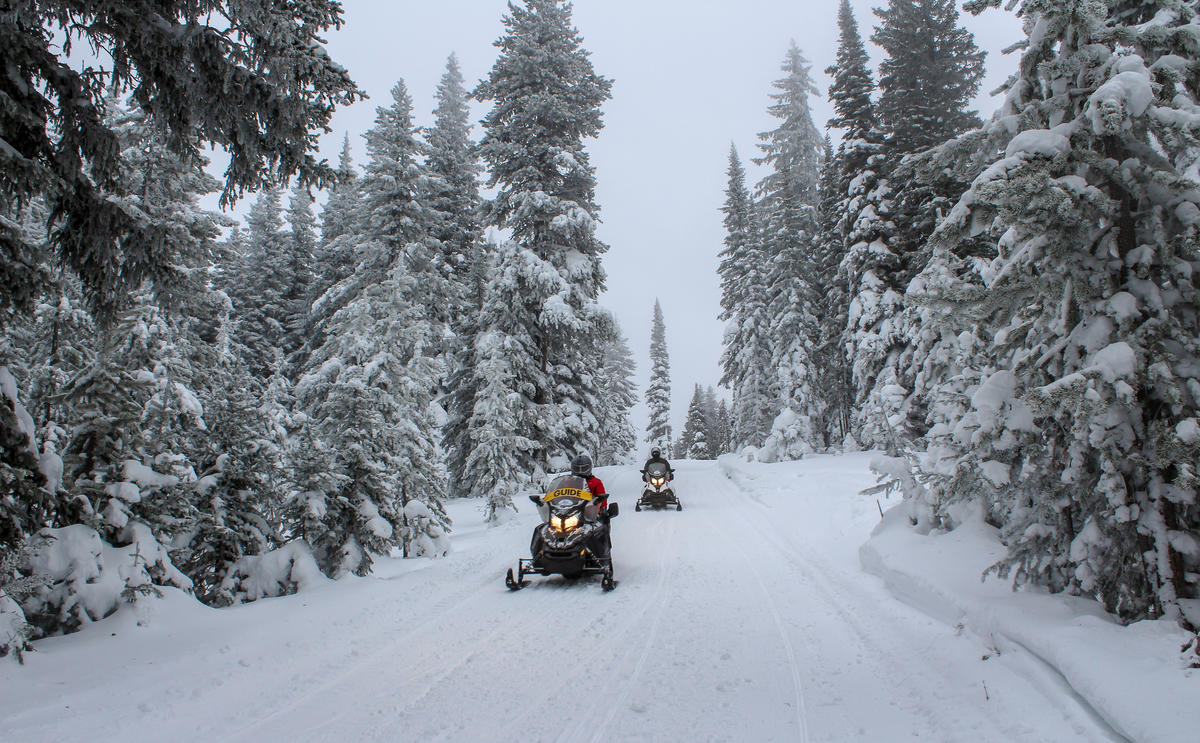 Most snowmobilers have heard of — if not visited — West Yellowstone a time or two for one specific reason: to sled Two Top Mountain. The first designated snowmobile trail in the Lower 48, Two Top Loop is famous for its terrain and nearly 2,000-foot elevation gain. It’s well-groomed and, on clear days, snowmobilers can see several mountain ranges, including the Grand Teton’s, and parts of Yellowstone National Park in the distance. Riding to the top isn’t the only photo-friendly moment either. The 30-mile loop from West Yellowstone follows the Idaho-Montana border and features many a friendly snow ghost — signature snow and ice coated trees — along the way. 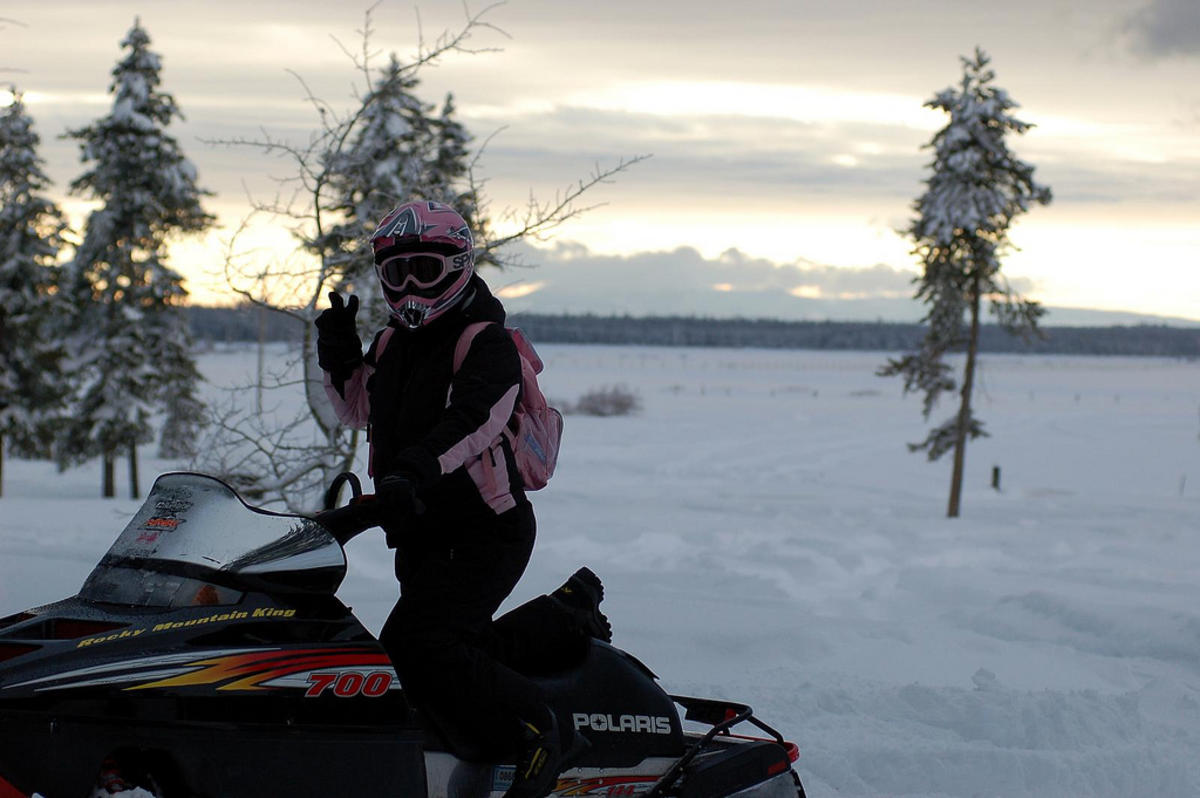 There are more than 400 miles of groomed trails throughout West Yellowstone and within the neighboring national forests — plus another 200 in the national park. Beginner snowmobilers will enjoy the wildlife along the Madison Arm Loop trail or the Horse Butte Loop along Hebgen Lake just outside of town, while more experienced sledders will want to tackle the Big Sky Trail. The 110-mile trail is not for the faint of heart. Though groomed in the beginning, it quickly becomes more of a powder experience, allowing riders to hone their skills along the way. As with any experience into a federally protected area, be sure to check into a guide service beforehand as they can provide updates on the trails and other helpful tips before you set out for the day. 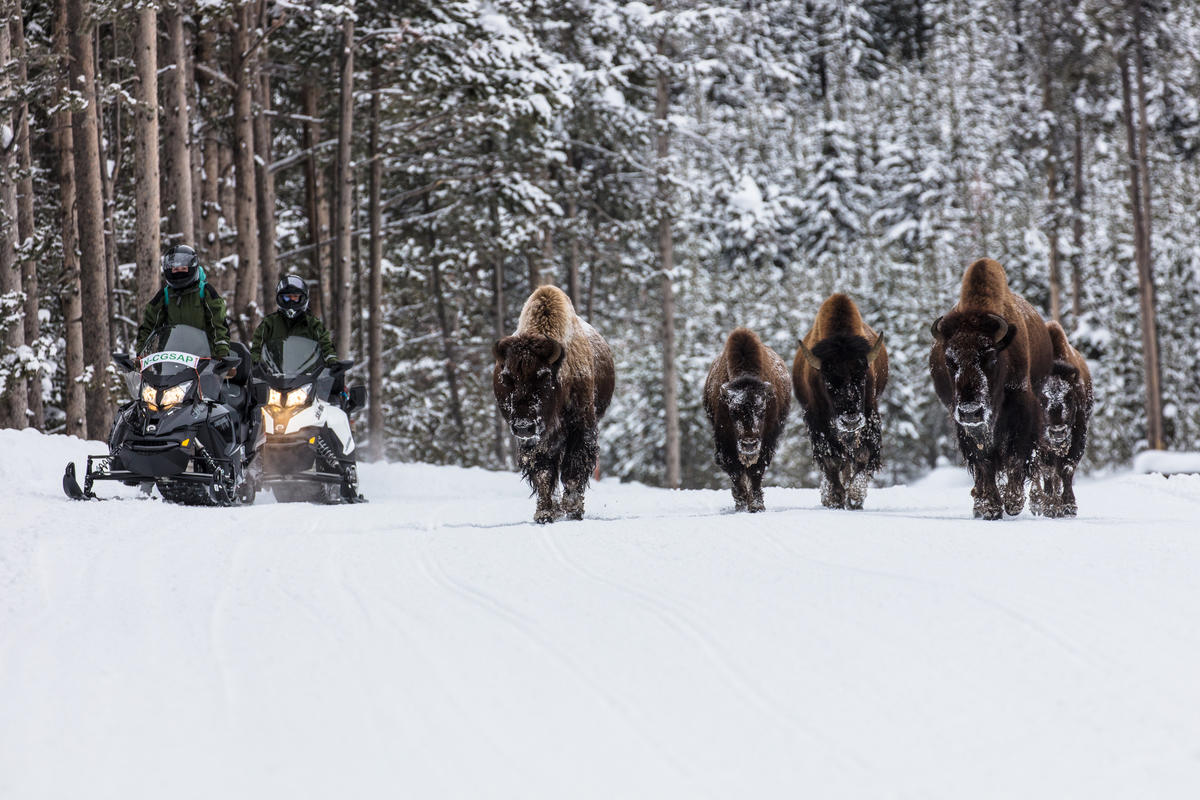 For years, snowmobiling into Yellowstone National Park during the winter months was by far the most popular form of transportation for visitors. In fact, it was the snowmobile that truly opened the park to winter visitors, allowing them to take in the steamy geysers and snow-covered wildlife unobstructed. However, the sheer number of snowmobilers flying through the park at top speeds in the 1990s (numbers topped 80,000 one season) proved to be too much of a disturbance — for both the animals and other visitors. Regulations were put in place — most recently in 2013 — to reduce the “blue haze” effect that had taken over the park. Now, no more than 51 groups of 10 snowmobiles are allowed into the park per day. Additionally, there are speed limits in place so that the buzz of the engines won’t disturb the animals or others guests.

It’s a happy compromise for all those adventure lovers who wish to enjoy the park their own way. Snowmobiling into the park is usually a full-day affair and must be done with a guide service. There are a number of tour operators throughout West Yellowstone who will be happy to craft an experience to suit your adventure style.

Have you ever ridden a snowmobile from your cabin to your favorite breakfast joint? You can do that in West Yellowstone. The main streets of West Yellowstone, especially those leading toward Yellowstone National Park and Two Top, are rarely plowed in the winter, making it a uniquely sledding-friendly town. And, as long as there’s snow on the ground, it’s all legal. More often than not, local residents ditch their vehicles in the wintertime to ride their snowmobiles alongside visitors from the Midwest. It’s an only-in-West-Yellowstone experience that, well, you just need to try.