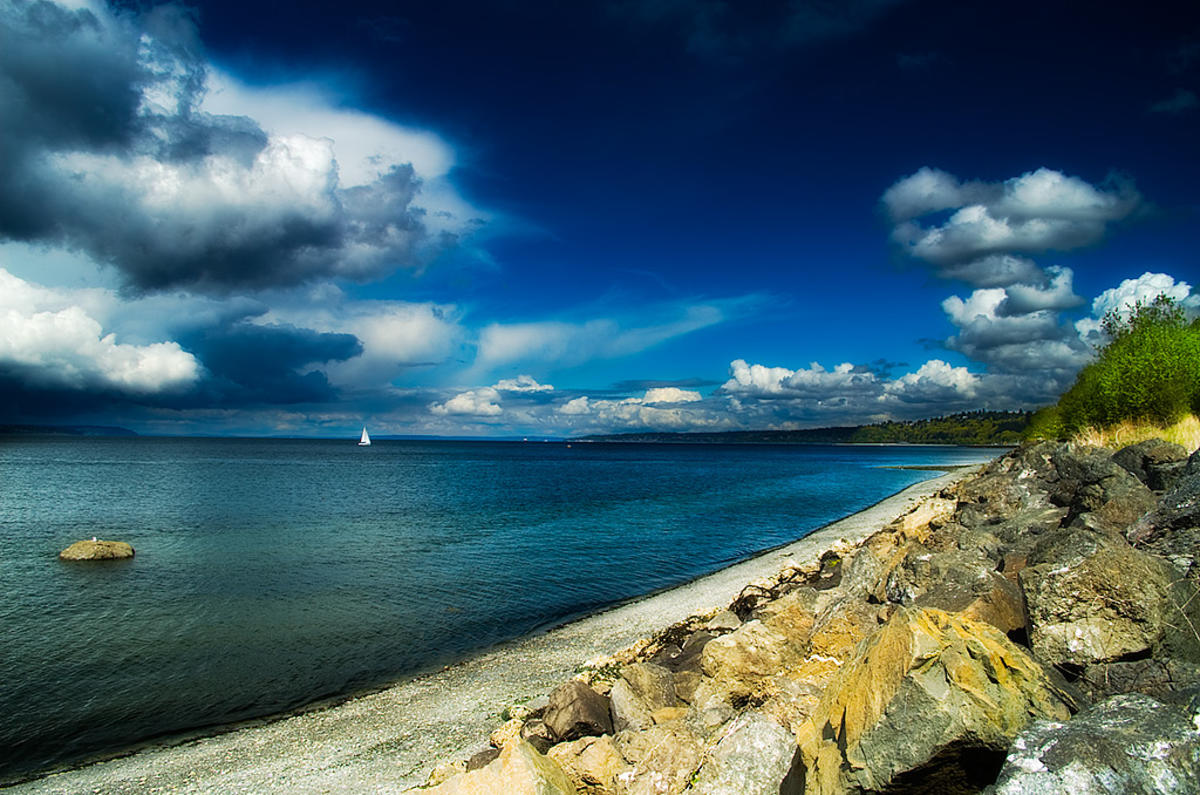 Washington State gets unfairly labeled as a soggy cold place virtually all year round. The fact is, Washington has several different climate zones and some of them are as dry as the desert. The Cascades form a rain barrier, creating very rainy conditions most of the year on the western side and fairly dry conditions in eastern Washington. Seattle gets rain regularly between October and July. Yet just across the Puget Sound, the San Juan Islands enjoy far less precipitation because they sit in a rain shadow. Beyond that, the Olympic Peninsula is so rainy that it actually has a rainforest.

July and August are the only two months when it will probably not rain. The temperatures hover in the perfect mid-70s (°F) zone and the blue skies send everyone into a frenzy of activity. This is the absolute peak tourist season because even the locals are out in droves. While you’ll enjoy sublime weather in summer, you’ll have to share everything with crowds of people. Late fall, winter, and spring are all characterized by rain and cool temperatures in the low 50s (°F). Seattle drops into the mid-40s (°F) in December and January, receiving the most rain as well. This double-whammy makes for unpleasant conditions, but loads of special hotel rates.

On the eastern side of the Cascades, the weather is generally 10°F cooler and significantly drier. In Walla Walla, summer highs reach into the upper 80s (°F), while winters drop to around 40°F. Winter is when most of the precipitation falls in eastern Washington, occasionally as snow. In the Cascades, it snows a lot during winter. Farther east, in Spokane, the winter lows are even colder but the year-round precipitation much lower than the rest of Washington.

On the western side of the Cascades, there is no better time to visit than July and August when the weather is truly inspiring. To avoid the crush of humanity, try visiting in September when the skies are still predominantly clear and most tourists have gone home. If you enjoy cool, rainy weather, then Washington is a paradise. Amazingly low hotel rates are standard from October through May.

In eastern Washington, there really is no bad time to visit. Winters tend to be cold and snowy, but if skiing is on the agenda, the Cascade ski resorts are fantastic. Summers are great from June right through the end of fall in October. Dry skies and nice, warm weather make for great conditions for exploring the outdoors east of the mountains. Again, winter is the prime time for low hotel rates here.