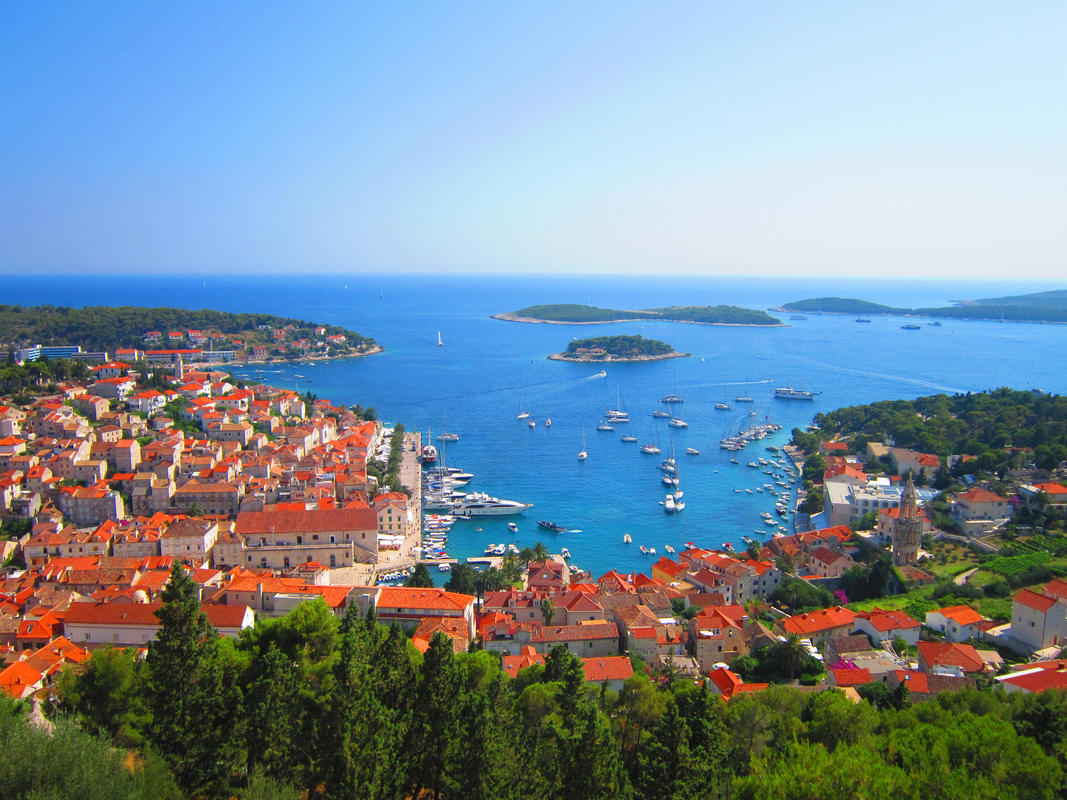 There’s an endless array of attraction in Croatia, many linked to its biodiversity and national parks even more than the iconic man-made heritage sites stretching back over two millennia. Many of the country’s historic towns are landmarks in their own right and contain a significant number of important buildings.

The historic center of the ancient town of Split was built around the Palace of Diocletian constructed as a retirement home for the former Roman Emperor. The original walls, temples, squares, main streets and massive gates are still visible, and people still live in the old-fashioned houses. The entire area is a UNESCO World Heritage site and contains St Duje’s Cathedral, built in 305 AD as Diocletian’s mausoleum. The ancient Jupiter’s Temple became St John’s Church and the two authentic Egyptian sphinxes brought by Diocletian to his palace are still standing. Address: Old Town, Split, Croatia Phone: +385-21-345-606 Website: http://whc.unesco.org/en

Tvirda is the Old City, built on the remains of a Roman town and home to several museums illustrating its troubled past. Set in the resort city’s main Trq Svetog Trojstva square is the imposing 18th century fortress built by the Hapsburg overlords. It’s a huge complex that contains plazas, mansions and tiny cobblestone streets with a surprising amount of ancient structures occupied by bars, nightclubs and restaurants. Address: Old Town, Ozijec, Croatia Phone: n/a Website: http://www.igocroatia.travel/tvirda

The medieval core of Zagreb know as the Upper Town, Gornji Grad looms over the Lower Town from its hilltop, with St Mark’s Square and its historic church the main focal points. A magnificent Baroque palace home to the country’s parliament lines one side, and on the other is a 16th century house, now the church parish office. The charming, cobblestone roads are lined with ancient homes, restaurants and small shops, and are a delight to wander, especially at night. Address: Gornji Grad Hill, Zagreb, Croatia Phone: n/a Website: http://www.croatiatraveller.com/Upper-Town

Korcula Town is a picture-perfect medieval walled settlement nestling on a promontory jutting out into the Peliesac Channel and almost completely surrounded by water. Tiny streets radiate out from the main arterial, and the Venetian Renaissance influence on its architecture culminates in the lovely 15th century St Mark’s Cathedral. The legendary explorer and friend to Chinese Emperors, Marco Polo, is believed to have been born here so be sure to visit his house. Address: Korkula Island, Croatia Phone: n/a Website: http://www.korculainfo.com/places/

The Old Town of Rovinj is easily explored on foot and is known for St Euphemia Cathedral, the Balbi Arch and picturesque Artists’ Street. The imposing gold medieval buildings were constructed out of huge blocks of local stone with a harbor and waterfront packed with ancient multi-story homes. For a fun day-trip, the ferry to Venice takes only two hours. Address: Rovinj, Northern Croatia Phone: n/a Website: http://histrica.com/istria/rovinj/

A UNESCO World Heritage site, this iconic religious building is one of Christianity’s earliest churches, and a supreme example of 6th century Byzantine architecture. All its basic components are original, and its earliest part, the oratory, contains the remains of a local saint. Magnificent Byzantine mosaics depicting bible stories cover its frontage and interior, and the early Christian bishop, Euphrasius, who commissioned the basilica is also represented. Address: Parek, Croatia Phone: +385-52-431-635 Website: http://whc.unesco.org/en/list

One of Croatia’s favorite National Parks, Krka is dotted with swift-flowing rivers, waterfalls and canyons and is one of Europe’s most important ornithological sites, with over 200 species calling the region their home. Set in central Dalmatia, the area was created to protect the fragile environment of the Krka River and its unique ecosystems. Rich in flora, its forests and mountains are home to eagles, falcons, eagle owls, vultures and 18 different species of bats, most of which are endangered. Address: Central Dalmatia, Croatia Phone: n/a Website: http://www.find-croatia.com//krkal

The stark, jagged slopes of the Biokovo mountain range dominate the Dalmatian coastline and are another protected wildlife area with St Jure Mountain the highest point. Rugged peaks and deep valleys, caves, rare plant life and the Biokovo Botanic Garden set above the village of Kotisina are all part of the conservation area. Walk, trek or mountain bike to get the best views, but much of the stunning scenery is accessible by car. Address: above Makarska village, Dalmatia, Croatia Phone: n/a Website: http://www.find-croatia.com/natureparks/biokovo.ht...

Opatija was famous for its healing waters in the late 19th century, and became a hub for wealthy Austro-Hungarian families who built extravagantly opulent mansions, endowed lovely parks and made the town into an exclusive resort community. Many Opatija area hotels offer spa and wellness services, and there’s no better place to sooth away aches, pains and worries. Address: Opatija Phone: n/a Website: http://www.opatija.net/

This interesting museum is the oldest of such in Croatia, founded in 1820 and containing artifacts from prehistoric times through the Classical Greek colonization, the Roman era, early Christianity and Medieval periods. Hellenistic ceramics, Roman glass, jeweled ornaments, and an extensive collection of antique coins and fine sculptured are its highlights. Address: Ulica Zrinsko Frankopanska 25, Split, Croatia Phone: +385-21-329-340 Website: http://www.inyourpocket.com/split/Archeological-Mu...

Museum of the City of Zagreb

Among a plethora of Zagreb museums, the Museum of the City of Zagreb has the advantage of being set in a monumental heritage building once the Convent of the Poor Clares. Exhibits span from Roman artifacts to present day treasures and give an interesting overview of over two millennia of the city and its culture. Address: 20, Opaticka Street, Zagreb, Croatia Phone: +385-48-51-361 Website: http://www.mgz.hr/

This stunning fortified town is located just a short journey from Zagreb in the southern foothills of Medvednica Mountain. Set on a projecting spur, the part-ruined town and its medieval walls can be seen for miles and is close to the famous Veternica Cave. Deserted in the 16th century after a major earthquake, the area is a fine example of architecture from the Middle Ages and sympathetic restoration has revealed many ancient stone carvings. Address: outside Zagreb, Croatia Phone: n/a Website: www.medievalwall.com/fortress-medvedgrad/

Just to the west of Split is the picturesque, historic town of Trogir, set on a tiny island off the mainland. Its center is a UNESCO World Heritage site and holds the Kamerlengo Castle, Venetian palaces, Romanesque churches and its original Hellenistic street plan. Highlights include the castle itself, the grand Church of St Lawrence cathedral and the 13th century Ducal Palace. The town’s marina is also a pretty sight to be seen lined with cafes and bars. Address: Near Split, Croatia Phone: n/a Website: http://whc.unesco.org/en/

Set in the isolated north-central region, Zumberak National Park is famous for its dramatic karst scenery, crazy rivers, waterfalls and variety of ecosystems. The hill villages are populated with descendents from the Uskok people with a unique heritage and folk traditions. Mountains, gorges, plains and a huge variety of flora and fauna make the park a dream destination for ecotourists and birders. Address: Slovenia borders, Croatia Phone: +385-13-327-660 Website: www.find-croatia.com/zumberak.htm

Click here to learn about Food and Restaurants in Croatia