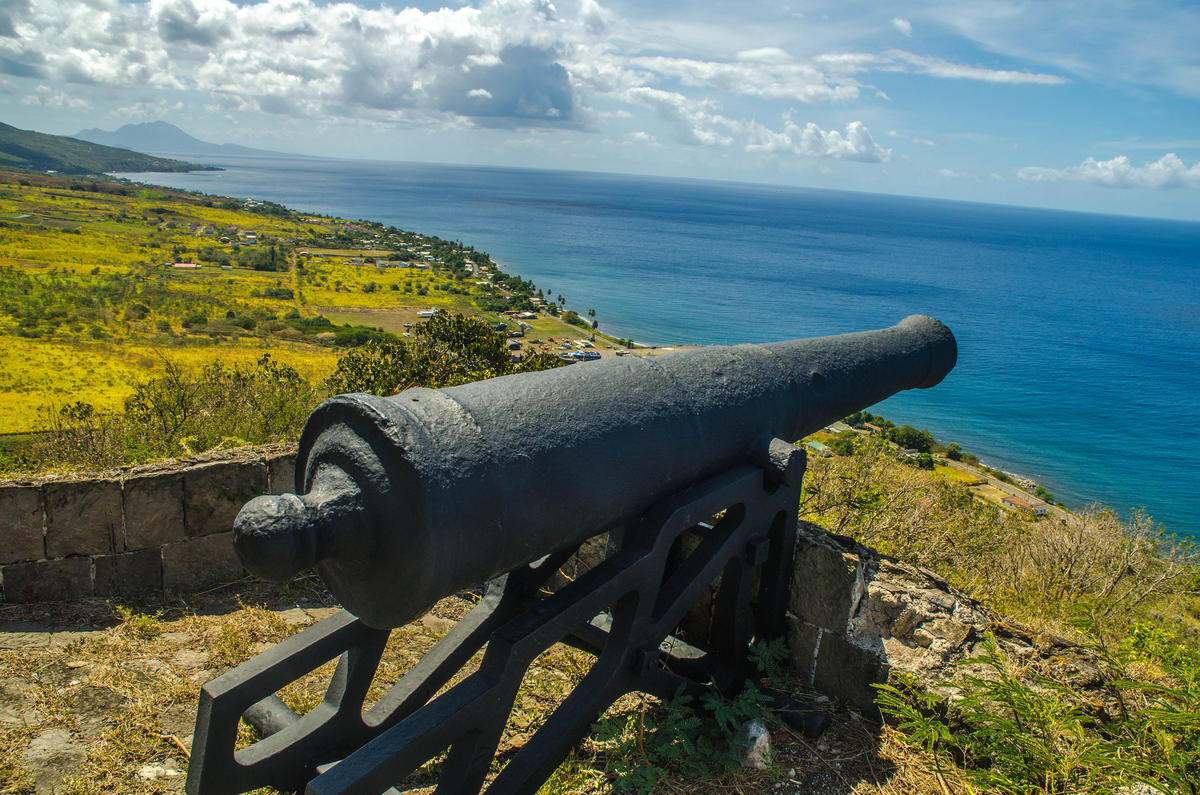 St Kitts and Nevis is a beautiful country in the tropics, and sites can be enjoyed on land or in the surrounding warm Caribbean Sea. St Kitts was one of the first islands of the Caribbean to be settled by Europeans, so provides a deep colonial history, such as Brimstone Hill Fortress, a protected historical site. The nature on that island, including Mount Liamuiga, is also inspirational. Certainly a trip to see the amazing nature underwater is worth it, such as at one of nineteen top dive sites.

The cliff top fortress is a national park in the country, and was also awarded UNESCO World Heritage status in 1999. It was the site of the famous battle of St Kitts, a power battle between the British and French colonial forces in the 18th century, which is reenacted every year. Construction of the fort began in 1690, and the might of it earned the nickname the ‘Gibraltar of the West Indies’. It was abandoned by the British around 1850. Address: Brimstone Hill Fortress National Park, north western St Kitts. Phone: +11-869-465-2609 Website: www.brimstonehillfortress.org

The major defense for the island of Nevis during colonial times was Fort Charles. Construction began in 1671, and was abandoned in 1854. 26 canons and some of the ruins still remain, overlooking the Caribbean Sea. Address: Fort Charles, Charlestown, western Nevis. Phone: n/a Website: n/a

Mount Liamuiga is one of the tallest peaks in the eastern Caribbean. It stands at 3,792ft on the island of St Kitts, and is actually a volcano, although the last verified eruptions were around 1,800 years ago. Today, lush tropical rainforests and cloud forests drape the slopes, providing a wonderful nature location. Address: Mount Liamuiga, central St Kitts. Phone: n/a Website: http://www.volcano.si.edu/world/volcano.cfm?vnum=1...

Dive sites of the southern Peninsula

St Kitts and Nevis hosts no less than nineteen world class dives sites. Many of them are located off the southern peninsula of the island of St Kitts, including the monkey shoals, which is a square mile of atoll coral. It offers amazing visibility for abundant sea life. There is also the shipwreck of the Corinthian, a boat that sunk in 1995, providing an easy grade dive of up around 70ft. Address: Various dive site, southern peninsula, St Kitts. Phone: n/a Website: http://www.prodiversstkitts.com/pages/sites.html

Basseterre is the capital city of St Kitts and Nevis, a visit here not only provides commercial value but historical enrichment as well. The city was founded in 1627 and made the capital in 1727. The city has encountered one of the hardest histories in the Caribbean, having been destroyed many times by war, fire, earthquakes, floods, and hurricanes. Despite this, there are still several historical landmarks left standing which can be seen. Address: Basseterre, central eastern St Kitts Phone: n/a Website: http://www.historicbasseterre.com/

Click here for Food and Restaurants in St. Kitts and Nevis