You Must See: The Peter Iredale Shipwreck 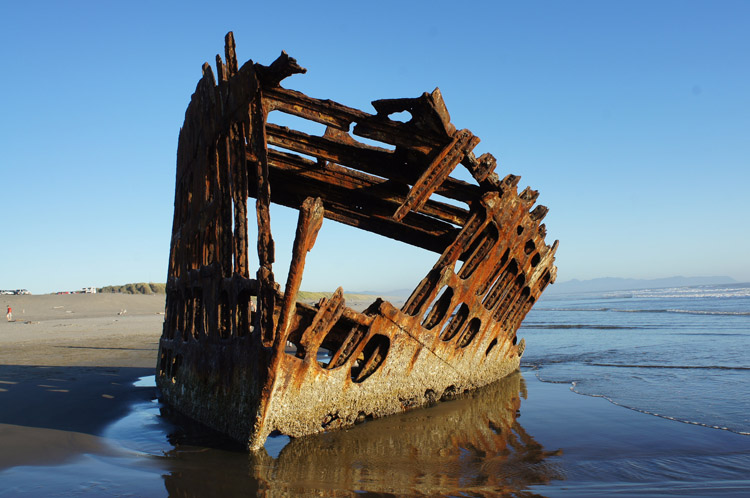 Called the Peter Iredale, the ship was abandoned over a hundred years ago on Clatsop Spit near Fort Stevens in Warrenton after a storm sent it reeling ashore. One of the most accessible shipwrecks in the Graveyard of the Pacific, the tides determine how much of this treasure is buried or unburied. Photographers love the skeleton ship and have captured thousands of incredible images with all types of lighting and angles eliciting a variety of moods. The wreck is contained within Fort Stevens State Park as part of the Lewis and Clark National and State Historical Parks so make a day of it and get your nature fix along with some sweet pirate selfies.

Here are some of our favorite shots of it:

Today's adventure : (aka yesterday's adventure) This is the Peter Iredale. She was built in 1890 and ran aground in 1906. A crew of 27, including two stowaways, all survived. Captain Lawrence's final toast to his ship was: "May God bless you, and may your bones bleach in the sands." I fought the waves just so I could touch her. 🚢🌊||

When driving up to Washington from Oregon I stopped at this shipwreck in the Fort Stevens State Park, OR. The ship is called Peter Iredale and is a famous sight along the northern Oregon coast. Even though it was pretty cold seeing this sunset made me forget about that. #oregon #oregoncoast #peteriredale #peteriredaleshipwreck #fortstevensstatepark #fortstevens #sunset #beach #roadtrip #ontheroad #2016travels #nikon #EarthFocus #shipwreck

This has to be one of my favorite shots from October at the Peter Iredale shipwreck of 1906. The ship ran ashore while heading to the Columbia River. It was here where I bumped into @jamesmeadphotography and he gave me a few pointers on capturing the Milky Way. I'm looking forward to eventually making my way back to the west coast and capturing more!! #peteriredale #oregon #PNWcast #igtravel #pnwonderland #pnw #milkyway #shipwreck #nikon #beach #landscape #instadaily #instagood #instagramers #loves_longexpo #phototag_it #picoftheday #mpixchallenge #FStoppersTravel #pacificnorthwest #pnw #globalpixels #exploregon #oregonexplored #pnwcollective #bestoforegon #oregonnw #pnwexplorations #best_skyshots #nightimages #wouldyoutravel