Ghouls, ghosts and gloomy gravestones are pretty standard fare for traditional burial grounds. This cemetery in rural Romania defies the stereotypes of cemeteries everywhere, though. In place of dull, gray headstones with formal epitaphs stand intricate blue crosses with decidedly fun — and slightly irreverent — prose. While solemn mourners may walk quietly through the rows of gray elsewhere, curious onlookers meander through the rows of colorful crosses, learning more about a small Romania town that prefers to look at the bright side of things. Sapanta, Romania may not have been on your radar, but this unexpectedly interesting place will surely need to be added to your itinerary. 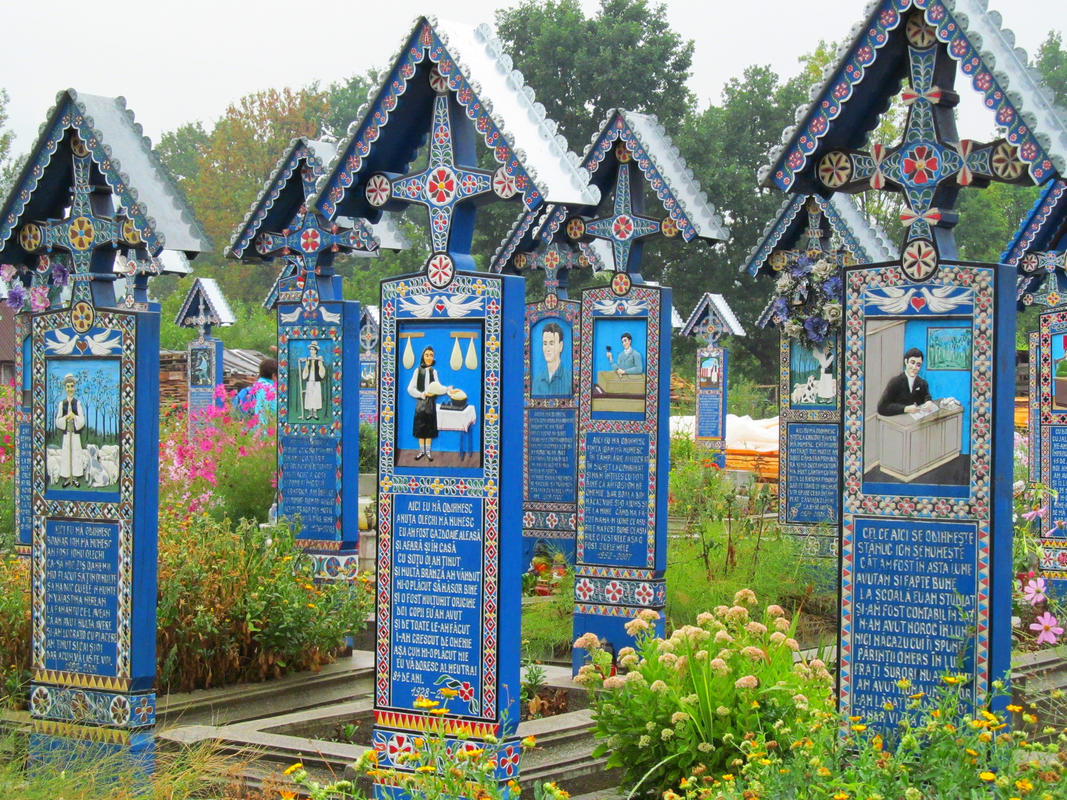 The Merry Cemetery and its tidy plots lie near the Romanian/Hungarian border in the small town of Sapanta. The cemetery's crosses share the same blue background and wooden structure, but there the similarities ultimately end. The artwork displayed on the graves is unique to the soul that now occupies the space below the ground. That is to say that each combination of geometric shapes, painted images and even the choice of color is a direct reflection of the occupants' personalities, interests, and quirks. For instance, geometric patterns in green symbolize life, yellow stands for fertility, red for passion and black for death. As you walk through the vibrant cemetery you’ll come across one cross showing a man tending his sheep (unfortunately unaware of the murderous individual behind him), while another depicts a small girl bending over her loom. The bright colors not only lend the area a cheerful note, but also serve as a source of information about the person's life, giving new meaning to "life after death." 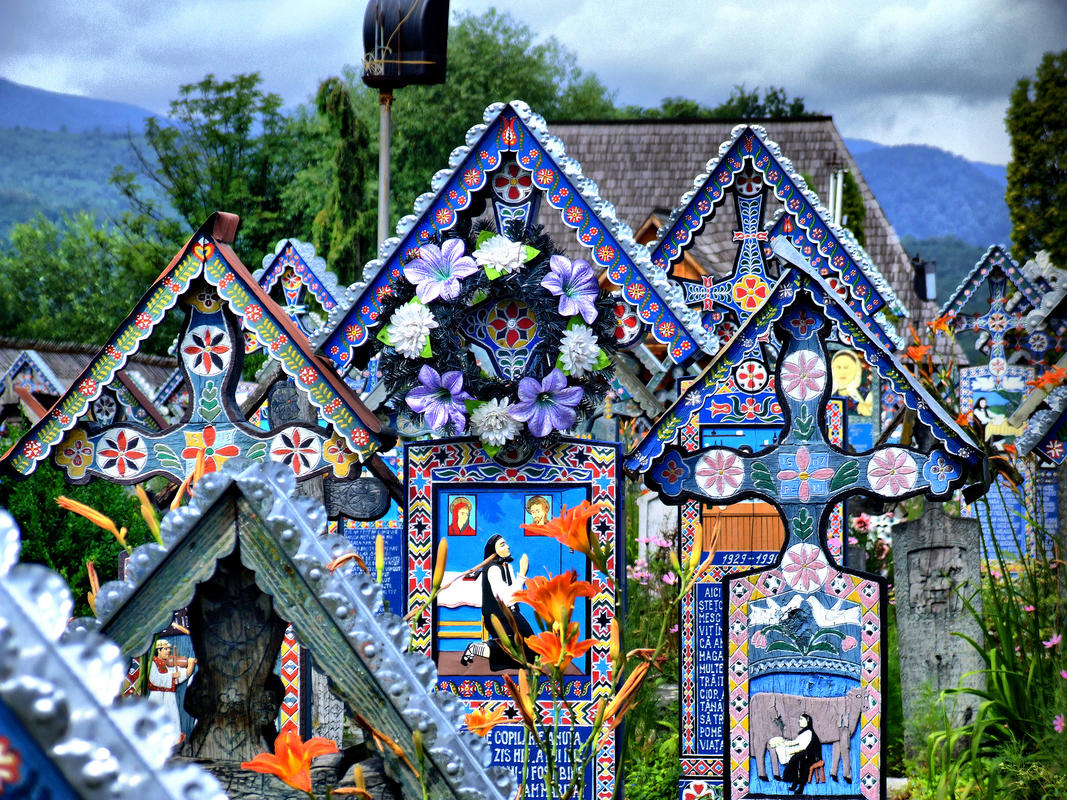 While modern-day tombstones tend to have dull, short epitaphs written on them, the ones in this cemetery offer a more astute — and good-natured — description of the persons below. The town drunk’s marker is perhaps one of the best examples of this. His grave is adorned with a black skeleton dragging a man down while he takes a long pull from his bottle. The lyrics underneath state: "Ioan Toaderu loved horses. One more thing he loved very much. To sit at a table in a bar. Next to someone else's wife."

Although some of the poetry seems rather disrespectful of the dead — seemingly spilling dirty secrets of infidelities and indiscretions — the sensible residents of small-town Sapanta don't seem to mind. After all, is there really such a thing as a secret in a town with fewer than 5,000 residents? The overall result is a refreshingly honest take on the men and women who have built and shaped Sapanta over the years. 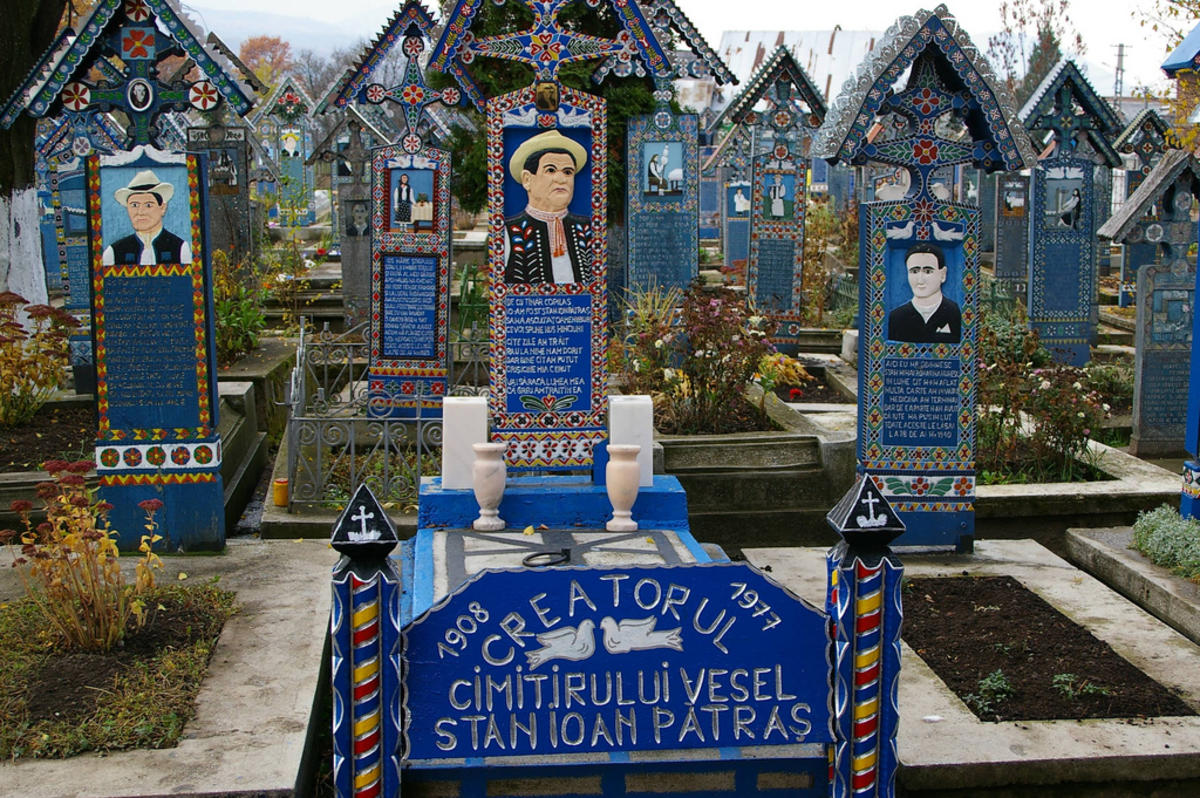 The Men Behind the Magic

Romania is certainly a country full of talented artists — its historic monasteries prove that. But, it takes a special person to create crosses worthy of the Merry Cemetery, for one must simultaneously be a poet, painter and sculptor. Ion Stan Patras was such a person. Patras started carving and painting crosses in the 1930s at the age of 14, and until his death in the 1970s, he was the only person to personally carve, paint, and write a poem for each grave, inserting his wry sense of humor along the way. Over a 40-year period, he designed some 800 crosses, including a portion of his own (pictured above), which you can visit within the cemetery, if you wish.

Patras’ handiwork was passed down to his most talented student, Dumitru Pop. Like his predecessor, Pop handcarves all of the crosses and personally pens the poem to accompany each cross. In his spare time he farms, carves furniture, and is, of course, ever on the lookout for his replacement so the tradition of the Merry Cemetery will live on long after he’s gone. 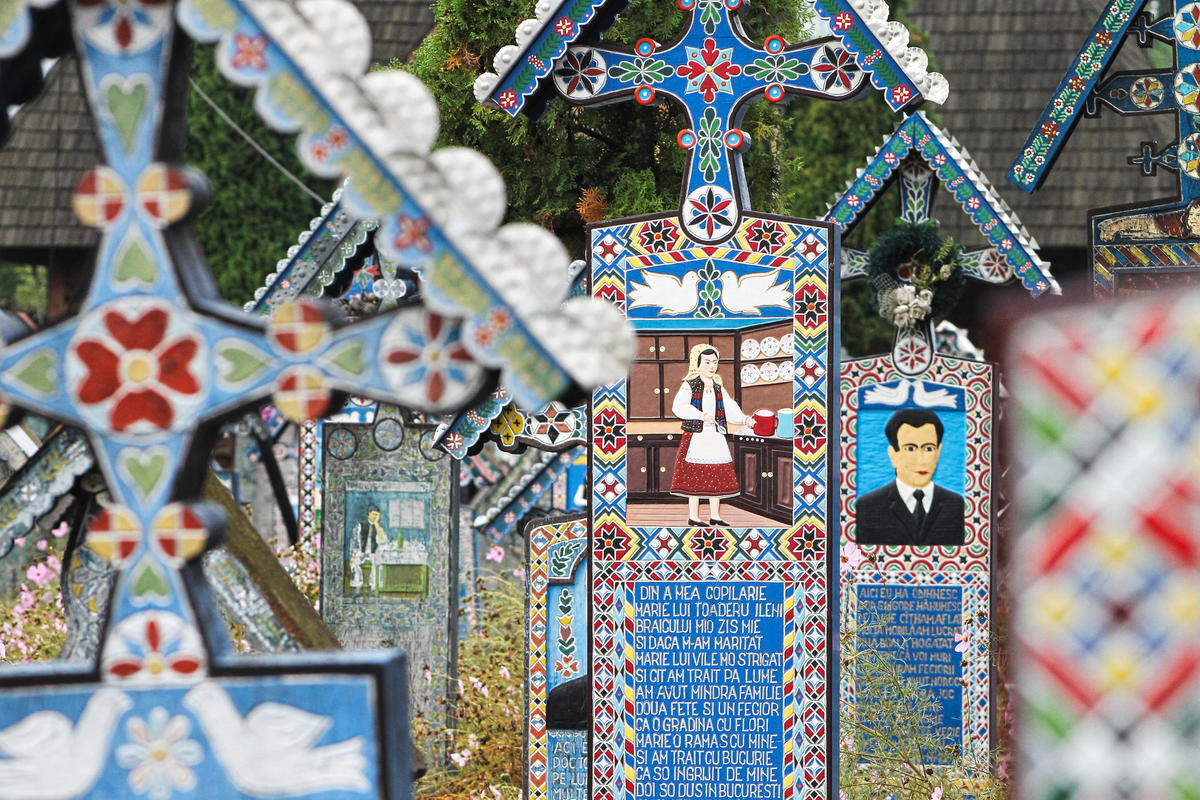 For decades Patras quietly worked for his community in isolation and anonymity. In fact, it wasn’t until a journalist published a story about him in the 1970s — shortly before his death —that outsiders began to take notice. Since then, thousands of visitors venture to Sapanta each year to see the cemetery for themselves. Their dedication is admirable — Sapanta is a little off the beaten path in northwestern Romania. The closest airport is in Oradea. From there, it’s another four hours by car. If you wish to tour the graveyard, you’ll want to hire a guide who can read the descriptions to you as most of them are written in Romanian, and if you choose to spend the night to explore more of this region (and who wouldn't?), you’re more likely to find a guesthouse in nearby Sighet.

The Best Art Museums in the World