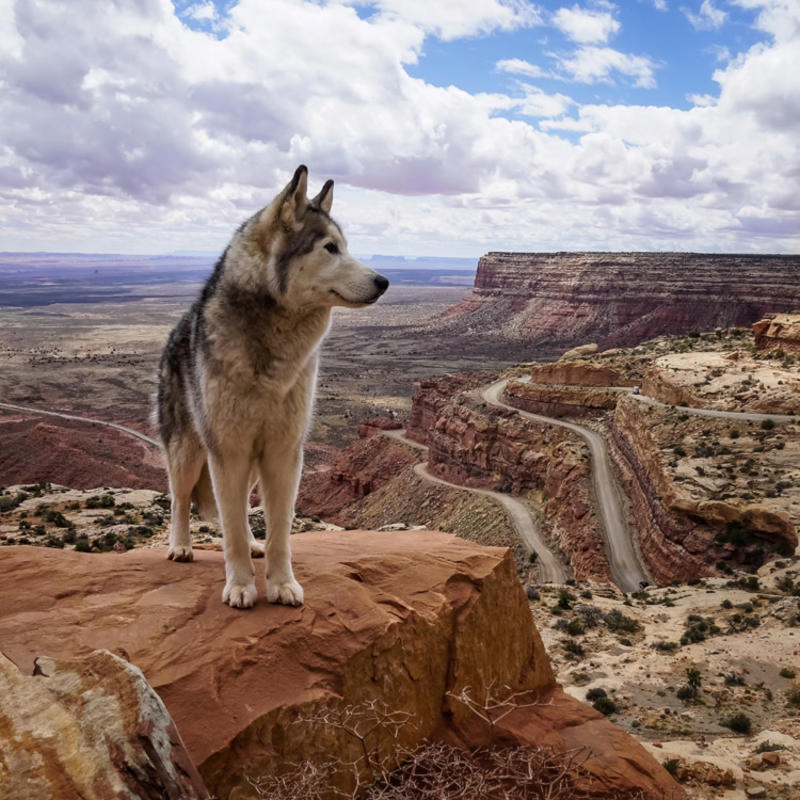 Kelly Lund owns one of the most recognizable pets on the planet, but if you met him, you’d never know it. Even more disinterested in fame is Loki himself. I’m not sure what I was expecting, but neither of the two are anything close to your typical celebrities. If you forget for a second that the wolf dog has well over a million social media followers (as a point of reference that’s about how many Tom Hanks, Julia Roberts and Tom Cruise have combined!), you may even say he’s the dog next door.

Yet somehow, Loki has mastered the blue steel gaze with his signature one blue eye, one brown to become an Internet sensation. Whether he’s wrapped in sleeping bags, hanging out in hammocks, perched on cliffs, or bounding through the backcountry, every adventure Kelly embarks on, Loki is right there by his side capturing it for the camera. They’re best friends, bound by a mutual love of the outdoors and wide-open spaces. And everywhere they explore, his audience comes right along with him.

If you can’t get enough of the adventure dog’s antics, here’s a behind the scenes look at this surprising duo’s story (courtesy of his human companion). 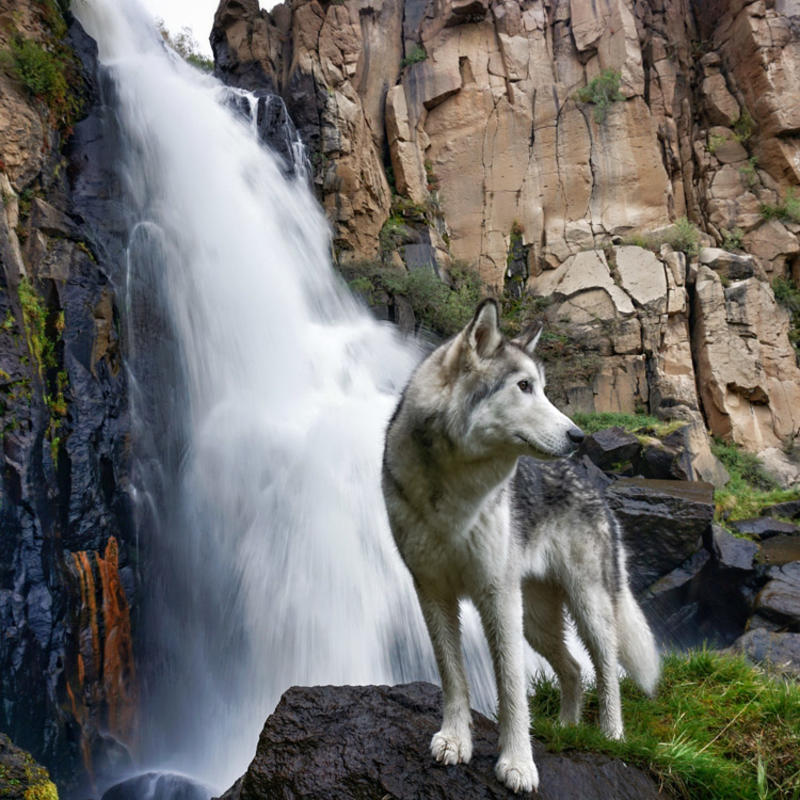 Your dog is more famous than most celebrities – how did this happen?

It started in November of 2013 when Loki was about a year old. My friends were making fun of me for posting so many pictures of him on Facebook and Instagram that they pressured me to make his own account. Unlike today, pet profiles were pretty uncommon. The first picture that really took off was him in front of a frozen waterfall: people loved it and several thousand people followed us that first week. A year and a half later, the Loki account had about 50 k followers and we started partnering with GoPro. There was one picture of us sleeping in a hammock that went viral, which led to being contacted by sites like Bored Panda and Buzzfeed for interviews. 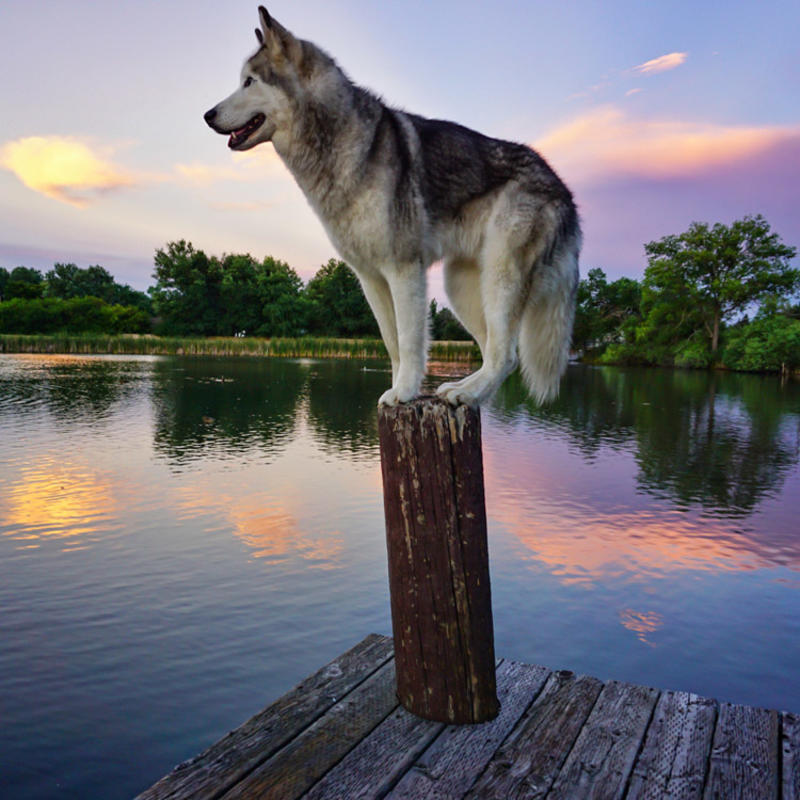 He’s all over the Internet…

Yeah, there’s been over 200 articles written about us and some that we don’t even know about. Most of the stories take the angle of the man who travels the world with his dog, which actually isn’t true. I’ve never left the country or flown with him (and won’t put him under the plane). In fact, I’ve passed up international trips that require leaving him for too long. 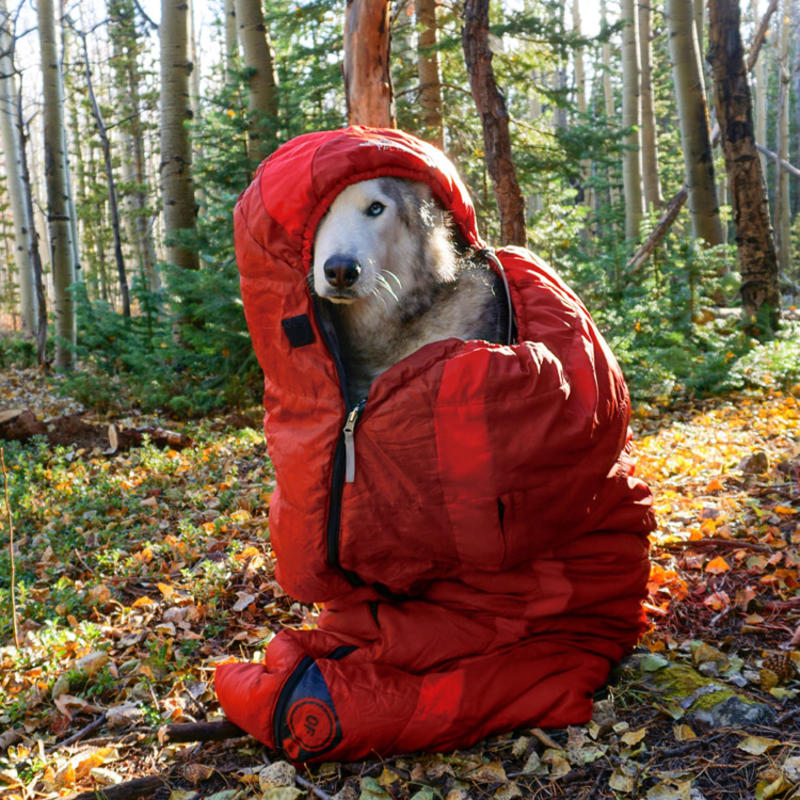 How often do you travel?

I actually have a full-time job working for the City of Denver as their Outdoor Recreation Coordinator. We run programs that get kids outside and active doing rope courses, snowshoeing, skiing, things like that. We have our other life reserved for long weekends and days off, and are gone about two weekends a month. It’s fun because it’s not my livelihood and I can keep the two lives separate. While it seems like we’ve been everywhere, we mainly stick to the territory within a 12-hour radius of our home in Colorado. 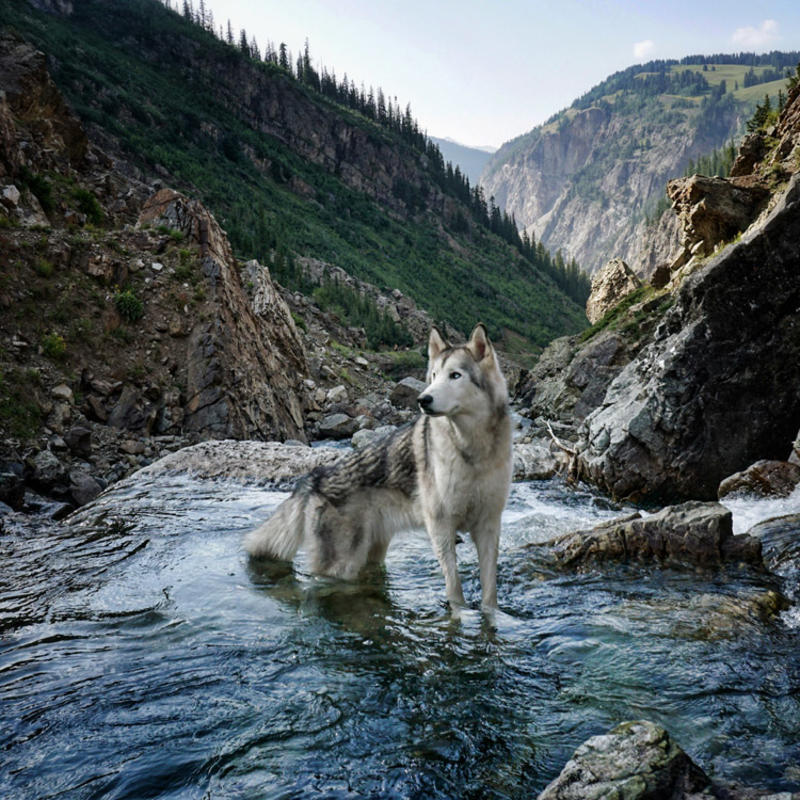 I don’t bring him around clients because you never know how people will react or who may be afraid of dogs, but when I am in the office yes, he comes to chill. 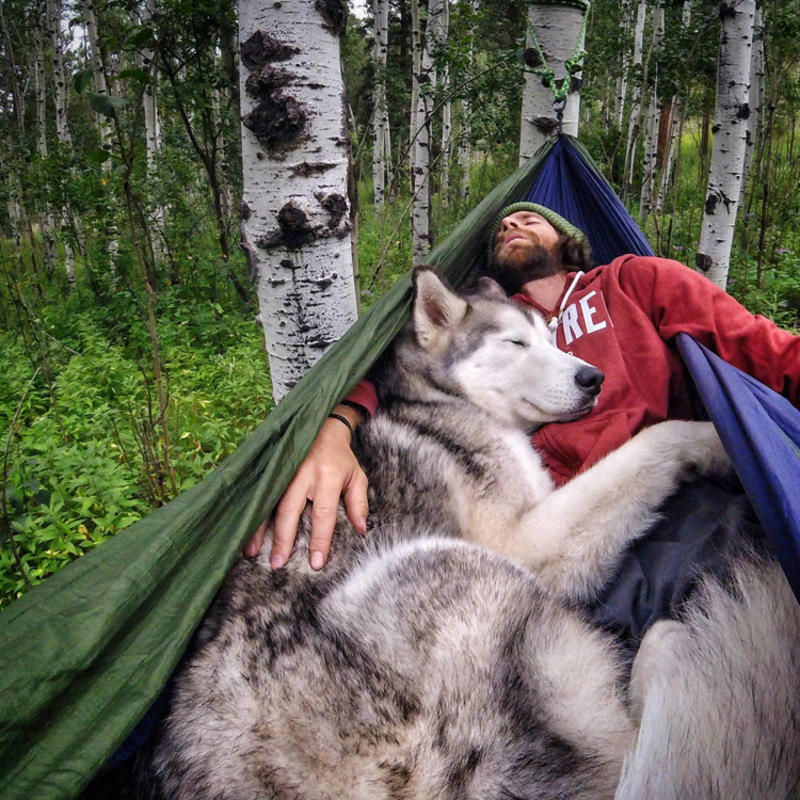 How old is Loki now? 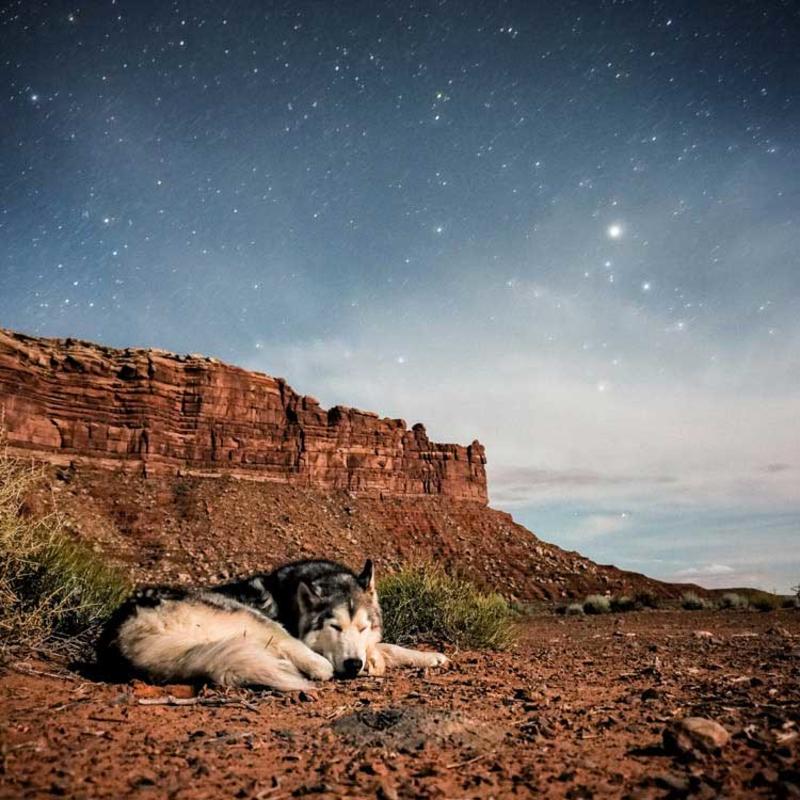 Does he get recognized when you’re out and about?

A few people here and there. Sometimes I even get recognized when he’s not with me. Our white pickup truck has become fairly iconic too. 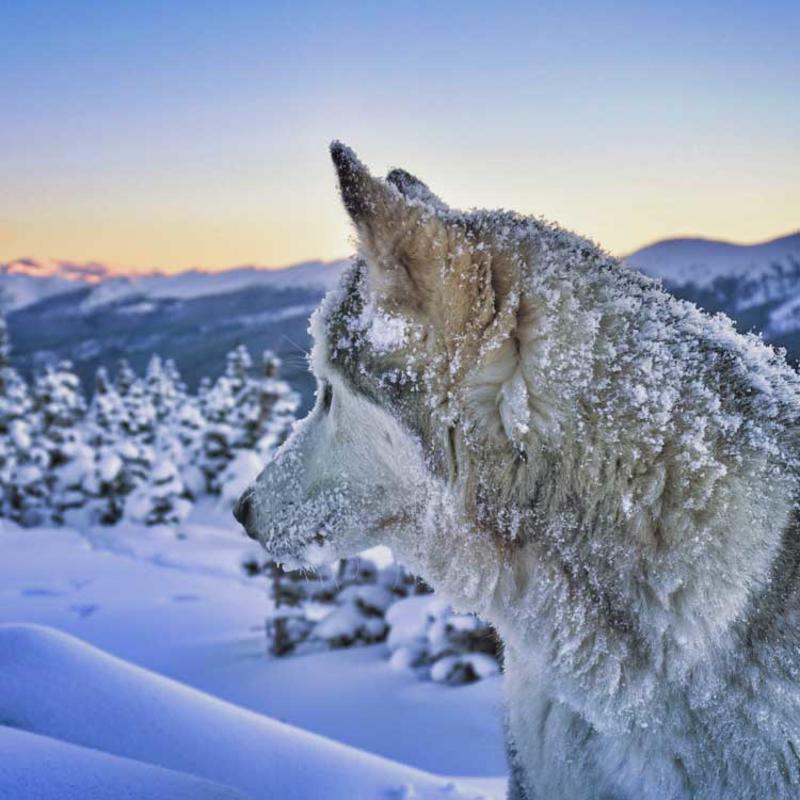 How’d you come to own him?

I got him when he was about eight weeks old from a breeder in Utah. It was supposed to be a seven-hour drive, but ended up taking 14 due to a brutal snowstorm. The 30-hour journey was basically foreshadowing for our life of adventure together. 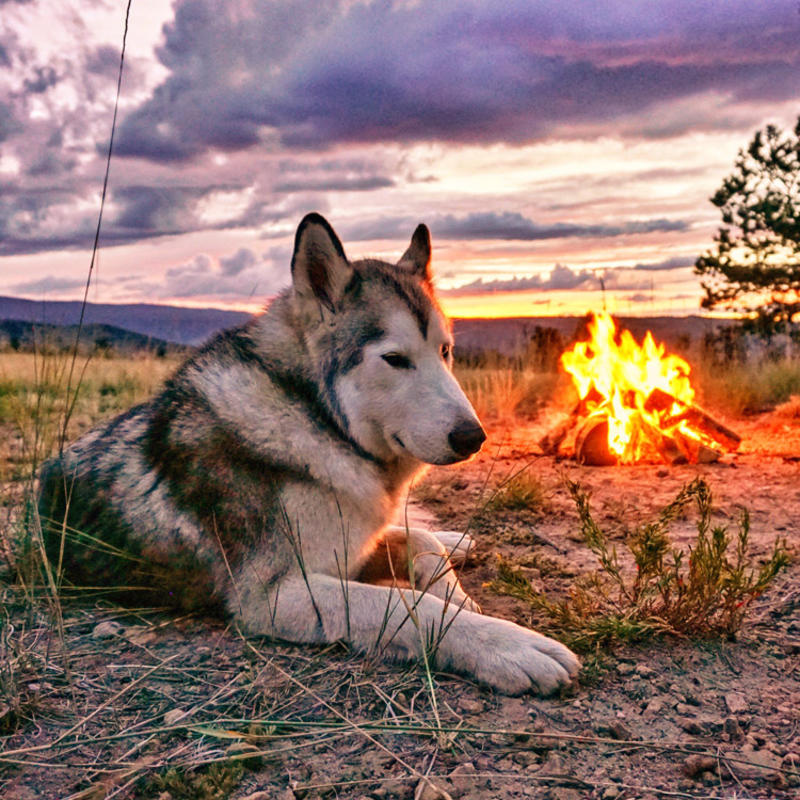 Yes, the question I get asked most often is where to get one. There’s such a great need for people to adopt wolf dogs, but you have to know what you’re getting yourself into. He is named after the god of mischief, after all. Just recently he ripped up the fence and window screen. He's a lot of work, despite being intensely exercised, much more than most dogs. 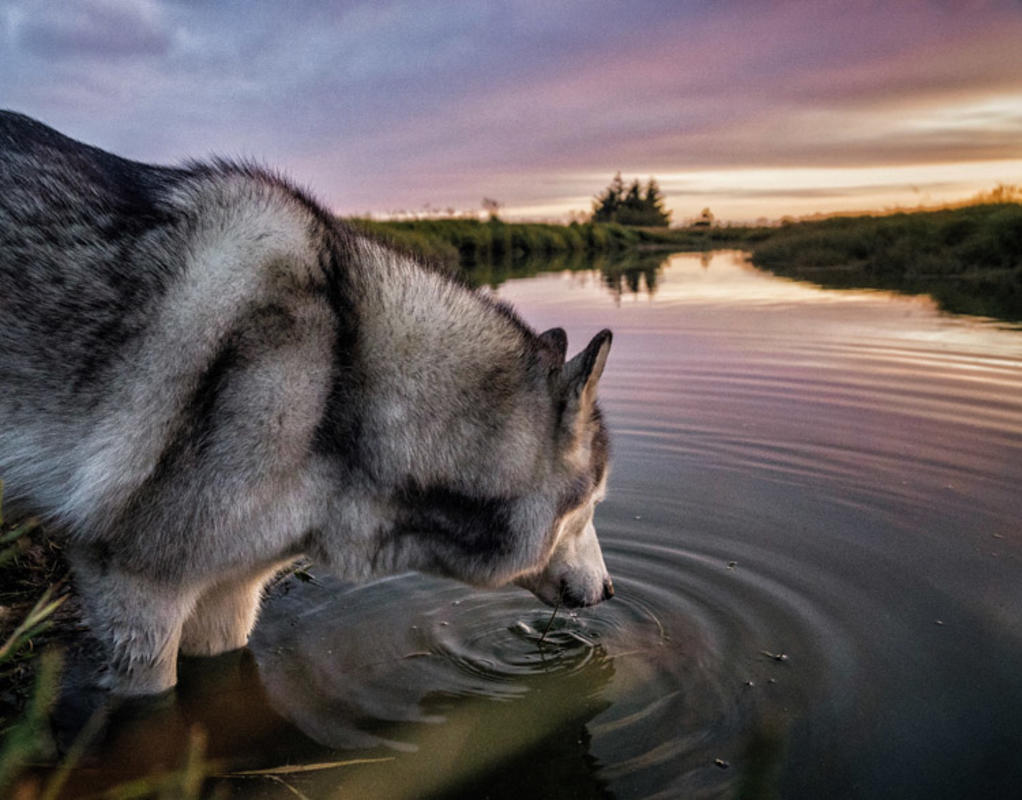 No collar, no leash, how’d you train him so well?

I’m not a dog trainer, but I have had big dogs my whole life. You have to fully commit to restructuring your life. I’m lucky that I get to spend an extra 40 hours a week with him at work that most people don’t. We’re always together. That being said, he's still independent and 70 pounds of energy. I’ve passed up solo trips because I don’t trust many people to watch him. 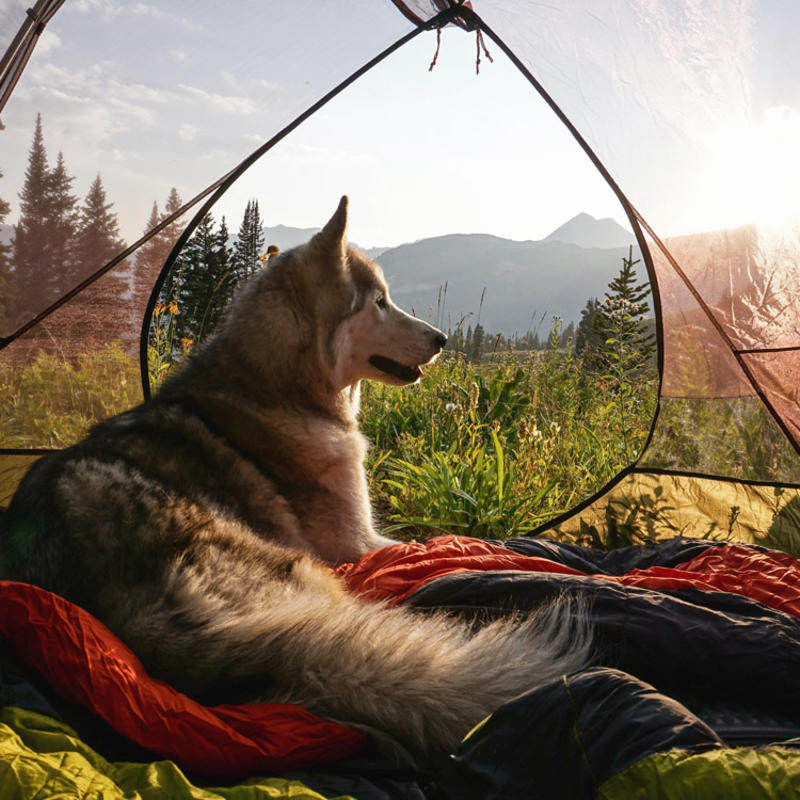 How do you get him to do all those crazy poses?

Way before we get to a destination, I spend hours thinking about the type of shots I want. He knows the drill because we’ve been doing this for so long. He lets me pick him up and put him over my shoulders. I don’t like to think of myself as his dad, but his friend. 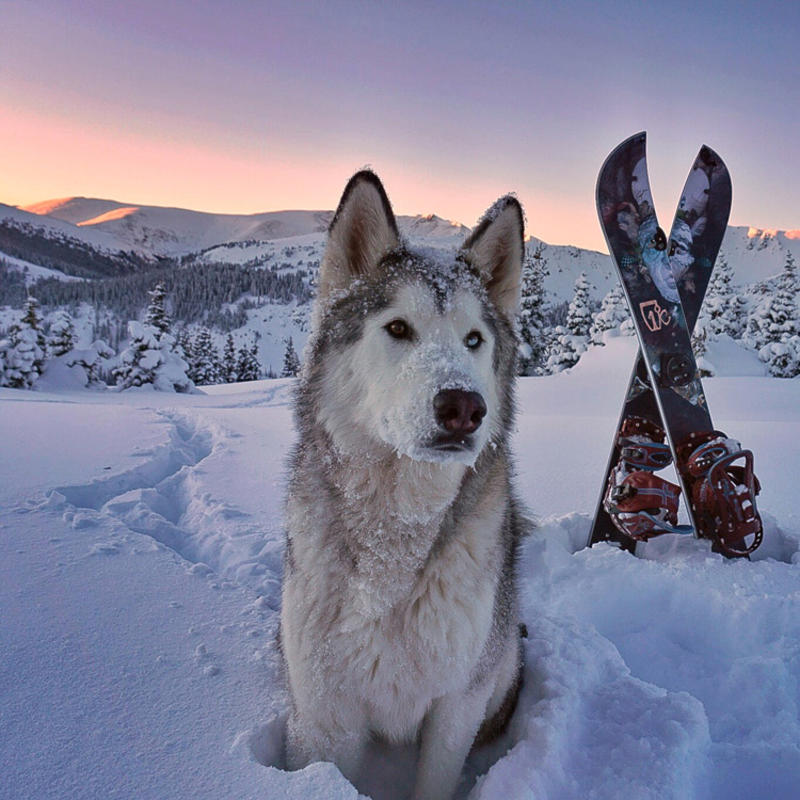 How spoiled is he – be honest?

He’s pampered, but he earns it. When we’re running around in the woods, he has to stand around taking pictures for hours, which is not what he wants to be doing. He’s a working dog. We’re also sponsored by a dog food company in Boulder called “I and Love and You” (named after the Avett Brothers’ album). They give us organic dehydrated foods and he takes fish oil. There’s a giant bone from North Face waiting for him that’s literally the femur of a cow. 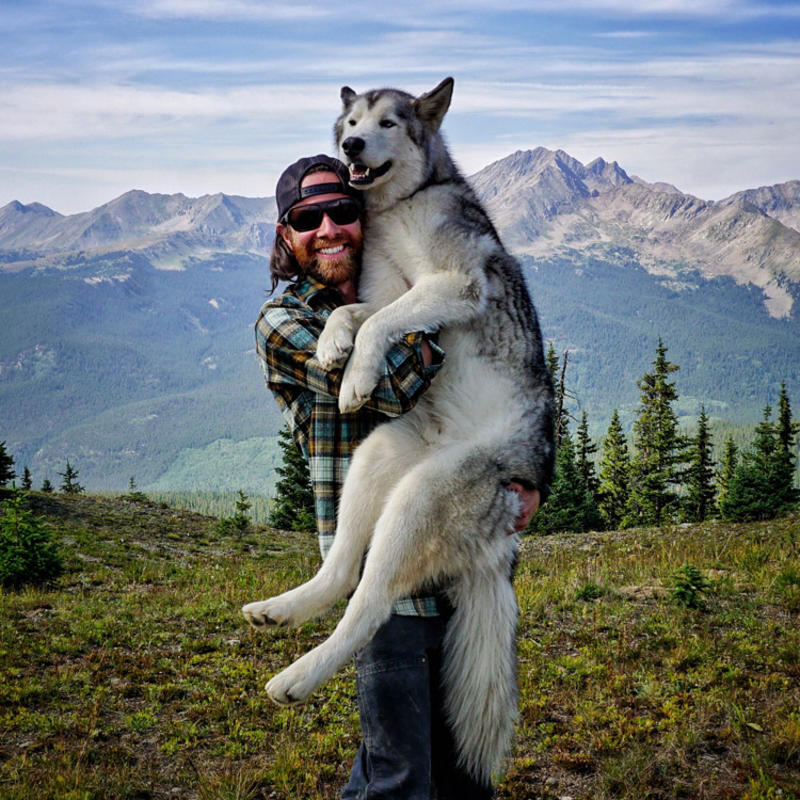 What’s been your favorite travel memory to date?

I’m from a place in Northern California called Crescent City, which is right between the Redwood Forest and the ocean. I took Loki there to see my family over the 4th of July. It was so good to be home and capture all the pictures I had in my mind of places I loved growing up. It’s a town of just 7,000 people so there’s not much to do, but the scenery is incredible – it’s a place you’d definitely recognize from Instagram. 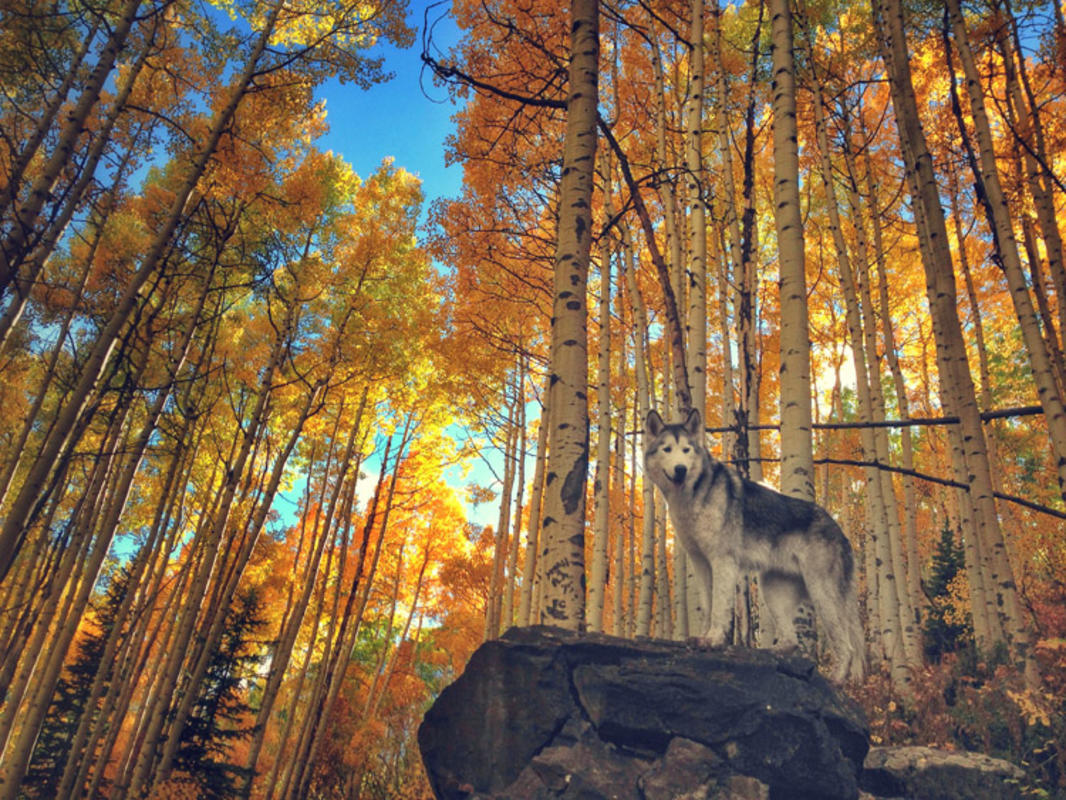 Tons. I’d like to drive up to Alaska or down the west coast from Canada to Baja. We haven’t done much of the east coast so I’d love to see the leaves change in the fall. We always love going to Jackson Hole, and Utah is another one of our favorite places. 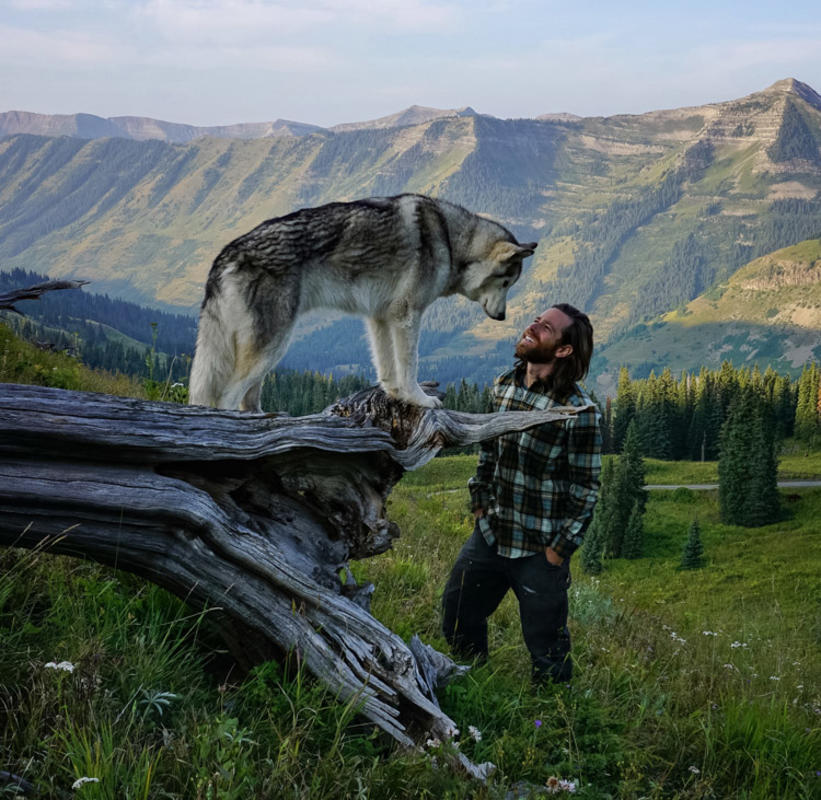 What are some upcoming trips you’re excited about?

We love going places where there are no people. Dogs aren’t allowed at any of the national parks, which is unfortunate, so you’ll never catch us at a big tourist attraction. There’s just too much traffic and too many regulations. We love roaming in nature and finding places nobody knows about by exploring the wilderness like we were meant to.

That's a message we can certainly get behind.

Budapest isn't the "Queen of the Danube" for Nothing